High levels of childlessness may seem typical of individualized modern societies. However, the phenomenon has been widespread throughout human history. From the Early Modern Period, marriage and childbearing were strictly regulated by law and custom. In many parts of northern and western Europe, marriage occurred late and many women and men never married or had their own children. But likewise in the more recent past, up to 20% of women born between 1900 and 1920 in many European countries remained childless. Likely explanations for this are massive economic uncertainties during the Great Depression and the lack of marital partners, as many men had died on the battlefield during World Wars I and II. For the cohorts born between 1930 and 1940, childlessness dropped to a historic low of around 10% across Europe. But for the 1950-cohorts, it started to increase again, although prevalence remained low until recently, with a few exceptions (e.g., the German-speaking countries and the UK, where about 20% of the women of these cohorts never had children).

Signs of a trend reversal? 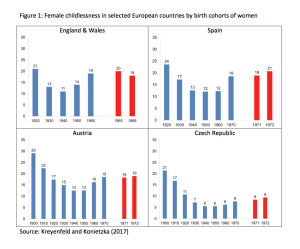 However, patterns are starting to change. The collapse of communism in Eastern Europe and rapidly changing gender roles in Southern Europe have expanded the pool of “high-childlessness countries”. Elsewhere, by contrast, there has been a decline in childlessness among the women born between 1967 and 1972: down to 18% in England and Wales (Figure 1). Northern Europe and France, generally considered to be family-friendly societies, have reported fairly low levels of ultimate childlessness in recent decades. In German speaking countries, it has stabilized at about 20%, after a long period of continuous increase. Germany, however, has launched major policy reforms since 2005, such as a massive expansion of childcare and the introduction of a Swedish-style parental leave system, which may put it on track towards relatively low levels of childlessness in the future.

Career orientation and the incompatibility of work and family life are often regarded as prime reasons for high childlessness among women. A closer inspection shows, however, that there are very heterogeneous pathways that lead to female childlessness in the different countries of Europe. In most western European countries, the phenomenon is more prominent among highly educated women, suggesting difficulties in reconciling career and motherhood. However, this interpretation does not fit for all countries: in Finland, for instance, childlessness has surged among low-educated women (ISCED 1-2), but has declined slightly among the highly educated (ISCED 5-6).¹

British and German surveys have tracked women and men’s fertility intentions over time. The data consistently show that few people choose to remain childless. Even at age 30, more than 60% of childless respondents in the British survey reported that they intended to have children. Among this group, however, around 30 percent were still childless in the follow-up survey conducted twelve years later (at age 42). When questioned about the reasons for this, several British respondents mentioned the lack of a suitable partner (23% men, 19% women). A significant fraction (18% men, 12% women) of them, however, could not indicate a precise reason, suggesting that they eventually “drifted” into childlessness.

There is a dearth of national statistics on male childlessness, and, for most countries, evidence comes from small sample surveys. France and the Nordic countries are among the few that provide evidence based on large-scale surveys or register data. A consistent finding from these countries is that low education and a low status occupation are correlated with high childlessness among men. This is usually attributed to their poor chances of finding a mate on the “partner market”.

It may not come as a surprise that men’s fertility is highly correlated with their partnership histories. While this also holds for women, there is still a gender difference. Many of the men who remain childless have never married or co-resided with a partner. Conversely, women who remain childless often report complex partnership histories with a succession of short-term relationships.

Childlessness is increasing in many countries, while in the former vanguards of high childlessness, such as the UK and the German-speaking countries, it is stable or declining. Thus, high levels of childlessness seem to be concentrated in Southern and Eastern Europe. However, there is no uniform process that governs trends and patterns. The causes and the consequences of childlessness vary by gender, social stratum and societal context. Female education and career orientation remain a prominent cause, but these factors alone are unable to explain the manifold pathways that lead to childlessness in the different countries of Europe.

¹ISCED categories can be found for instance here.