Around the world, new generations can expect to live longer than previous generations, and the rate of increase is surprisingly strong and constant (Leeson 2014; see also wikipedia_Oldest_people). Life expectancies at birth in England and Wales increased from 48 years for females and 44 years for males in 1900 to 71 years and 66 years respectively by 1965, and again to 84 years and 80 years, respectively, in 2014. Increases were more modest in the latter half of that century as they were driven by improvements in survival at older ages (Leeson 2014a; Vaupel 1998). Furthermore, there is a body of evidence indicating that lives will continue to be extended (for example Bongaarts 2006; Christensen et al. 2009; Vaupel 2010; Leeson 2011, 2014a).

The verified oldest person ever to have lived is Jeanne Calment, who died in France in 1997 aged 122 years 164 days. The last surviving Briton born in the 19th century was Grace Jones who died on November 14th 2014. Living in three centuries is nothing new. Margaret Neve lived in the 18th, 19th and 20th centuries (1792-1903) and is one of the earliest verified of such cases, and large proportions of those born towards the end of the 20th century will live into the 22nd century (Office for National Statistics 2012; Department for Work and Pensions 2011).

The coming of (many more of) the centenarians

What of the future? 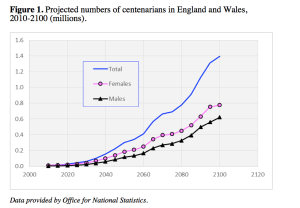 Data from the Office for National Statistics in the United Kingdom reveal that by the turn of the next century, life expectancies at birth might be 93 years for males and 95.6 years for females in England and Wales. This will lead to increasing numbers of people at extreme ages, including centenarians, as is reflected in the official forecasts of the Office for National Statistics. Figure 1 illustrates the projected numbers of centenarians in England and Wales across the remainder of the 21st century.

As can be seen, the number of centenarians is projected to increase steadily until the end of the 21st century. In the 2010s, there are 5 times as many female as male centenarians, but by 2100 numbers of male and female centenarians are expected to reach around 620,000 and 776,000, respectively.

What if age-specific later-life mortality declines more than projected in the official forecasts of the number of centenarians? An example is presented in Leeson (2016). Consider a scenario in which projected mortality for those aged 55 years and over decreases by an additional 5% every 5 years in relation to the official projected mortality. The number of centenarians in England and Wales by 2100 would reach around 1.8 million (Table 1). 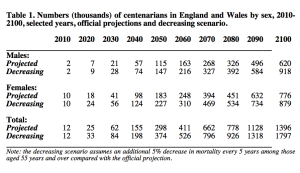 The more optimistic scenario could be fuelled, for example, by potential additional decreases brought about by medical advances such as stem cell therapies enabling 80-year olds to live to 200 years of age (Lavasani 2012).

Are individuals, families, communities and society at large prepared for this development? European populations were surprised by the fundamental changes brought about by the ageing of their populations in the latter part of the 20th century – a combination of resistance to the idea that life expectancies could exceed expectations and that mid- and late-life mortality could decline significantly. The result was that old age was pushed back to age 80 and over.

The future may also present surprises and challenges if we ignore the significantly increasing number of extreme aged individuals in our societies, with centenarians comprising increasing numbers and proportions of populations, and with old age being pushed back even further.

The century of centenarians will be challenging in both the developed and the emerging economies of the world. The trend has fundamental consequences for the way in which individuals view and live these extending lives, but also for the way in which societal infrastructures (education, workplace, housing, transport, health and social care) will need to be adapted to the needs of these extreme-aged populations.

How could/should people begin to prepare themselves for such long lives? The future looks to presents a challenge to life course planning. It is also a challenge to current concepts of old age and retirement (is retirement even at age 75 years sustainable?). Family dynamics will be challenged by the survival of these extreme-aged generations; intergenerational succession and inheritance will be delayed, and individuals will rely on smaller families for support in frail and dependent old age.