“Time and chance happeneth to them all. For man also knoweth not his time: as the fishes that are taken in an evil net, and as the birds that are caught in the snare; so are the sons of men snared in an evil time, when it falleth suddenly upon them.” (Ecclesiastes 9, 11-12; KJV)

These famous words, written over 2,000 years ago, suggest that all are equal in the face of death. But what may have been true then is no longer true in our current day and age. We can now anticipate how long people will live, and will outlive others,—, based on their social characteristics. In the United States, as in most other countries of the world, women live longer than men, whites longer than African Americans (Acciai et al ), and the rich and well-educated longer than those with low socio-economic status. All of these differences are encapsulated in significant gaps in life expectancy at birth—the average age at which infants born today will die if exposed to the current (group-specific) death risks. 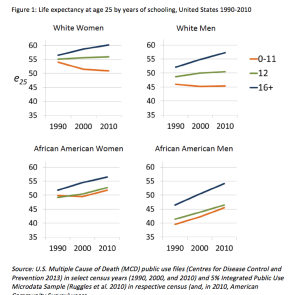 Educational attainment has become the single most important predictor of longevity in America. Whereas the gender and black-white gaps in life expectancy have diminished in recent decades, the gap between those with a college degree and those without a high-school diploma has doubled for men and more than tripled for women since 1990. At age 25, college-educated white men can expect to live an additional 57.3 years, 11.9 years longer than their low-educated counterparts who did not finish high school (Figure 1). Among white women, the same gap increased from 2.5 years in 1990 to 9.3 years in 2010 (among African American men and women the education gap in life expectancy was 8.6 and 4.7 years, respectively, in 2010).

The most troubling finding is that since 1990 life expectancy for those without a high-school diploma has declined by 3.1 years for white women and 0.6 years for white men (but continued to increase for African Americans at all levels of education). Such a sustained decline in life expectancy is unprecedented in the United States and in the industrialized nations, in times of peace. Furthermore, among white Americans who have completed high school, life expectancy increased by a mere six months in the decade since 2000—a very modest improvement compared with the rate of increase throughout most of the twentieth century. The only group to experience a significant rise in longevity since 1990 are those with some college education and especially those with a college degree, for whom life expectancy increased by about 4.5 years. In other words, the education gap in longevity is widening, and not only between those at the top and those at the bottom. There is a clear relationship between education and mortality in which each additional year of schooling reduces the risk of death—all the way from elementary school up to advanced university degrees.

Uncertainty in the length of life

Although life expectancy is a very useful measure of longevity, it does not fully capture the uncertainty associated with an individual life span. Imagine two populations with the same life expectancy of 75 years. In the first, everyone dies exactly on their 75th birthday; in the second, half of the population dies at age 50 and the other half at 100. In which population would you rather live? Clearly, the latter scenario entails tremendous uncertainty, from an individual standpoint, whereas the former does not. In real populations the differences are not quite as dramatic, but the basic principle is the same—those with greater dispersion around the life expectancy face greater uncertainty as to the length of their life.

As it turns out, there are significant differences between the various education groups not only in life expectancy, but also in the dispersion of ages at death. College-educated Americans live longer than any other education group, on average, and their deaths are narrowly concentrated around their already-higher life expectancy. By contrast, lower education groups face much greater uncertainty regarding how long they will live—and this uncertainty has been on the rise since 1990. This is because many more of them now die from premature and preventable causes of death. Excess mortality at younger ages translates into greater uncertainty in length of life. For example, a white man without a high school diploma is as likely to die at age 60 as he is at age 90, whereas his college-educated counterpart is roughly eight times more likely to die at 90 than at 60 (Figure 2).

Betting on how long we will live

Implicit in many of the choices we make throughout the life course is our expectation of how long we will live: the number of years spent in the workforce before retirement, whether and for how long to take that mortgage, and the amount of savings needed for old age, among other decisions. The great majority of college-educated individuals can expect to live longer lives and with a greater degree of certainty. Low-educated individuals, on the other hand, live shorter and more precarious lives in which planning ahead is often futile. For them, early retirement could be their only option to enjoy a few years outside the workforce, or, equally likely, condemn them to several decades of poverty.

This poses a major concern not only for individuals, but also for the social and economic institutions planning for our old age. The Social Security Administration and programs such as Medicare immediately come to mind, but the problem of rising uncertainty in length of life—at least for some groups in the population—permeates to local authorities, non-profit organizations, and the private sector. It also raises several questions about distributive justice: first, whether the inequality in life expectancy can be reduced by preventing premature deaths among the low educated, which will also act to reduce the uncertainty in their life spans; second, if we find a certain degree of inequality acceptable as a society—as we do in multiple other social and economic domains—whether we should compensate high-risk groups by instituting a differential retirement age, so they too can reap the benefits of their life-long contributions to Social Security before it is too late.