While divorce is usually lower in Asian than in Western societies, a drastic rise in crude divorce rates has been reported in many East Asian countries in the recent past (Dommaraju and Jones 2011). Japan, South Korea, China, and Singapore, among others, have witnessed a two- to five-fold increase in the prevalence of divorce in less than four decades (United Nations Population Division 2009). Taiwan is no exception: its crude divorce rates rose from about 0.3-0.4‰ in the 1970s to a peak of 2.9‰ in 2003 (2.4‰ in 2012), which is among the highest in East Asia and is also higher than that of several industrialized countries (OECD Social Policy Division 2015). The drastic increase in the overall divorce rates masks an important fact: as Taiwan goes through industrialization and continues further into post-industrialization, social inequality is expanding across educational lines, with the less educated becoming more vulnerable to union instability than their better-educated counterparts.

Divorce patterns vary not only across countries but also among social groups. Divorce differentials point to the fact that marital instability and its consequences are experienced differently across social lines. The general pattern in Western societies lines up well with Goode’s hypothesis (Goode 1993) that divorce differentials by education tend to be positive in countries where marital disruption is uncommon, and negative where divorce rates are high (Härkönen and Dronkers 2006; Matysiak, Styrc, and Vignoli 2013). In other words, divorce is at first a “privilege” of the elites; but, as it expands and “becomes popular”, it affects more and more the socially disadvantaged groups (De Graaf and Kalmijn 2006; Härkönen and Dronkers 2006; Martin 2011). 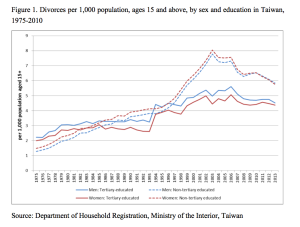 A recent study on the educational disparities in risk of divorce from 1975 to 2010 in Taiwan shows that, in this society, divorce differentials by education have changed from positive to negative (Cheng 2016). As shown in Figure 1, men with tertiary education used to experience higher risk of divorce in the 1970s and 1980s, but this pattern reversed in the early 1990s, and in the past 20 years divorce has been more likely among the less educated. The same reversal in educational patterns of divorce occurred even earlier for women in the 1980s. In addition, a closer examination of the age profiles of those who divorce indicates that young married adults under age 30 have been particularly exposed to the risk of divorce in recent years, and this holds true especially for women. 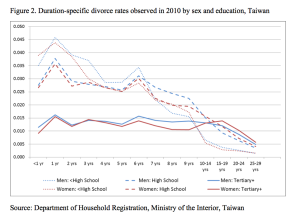 Further investigation of divorce risk by duration of marriage based on the rates observed in 2010 also reveals clear educational variations (Figure 2). For men and women without tertiary education (high school degree or less), divorce peaks one year after marriage and then declines. Conversely, those with tertiary education have a relatively low and constant divorce risk across almost the entire span of their marriage life. It is only after 10 years of marriage that those with less education become less likely to end a marriage than their better-educated counterparts. And no trace of the famous “seven-year itch” appears in any educational group.

With these duration-specific divorce rates, one can estimate the proportion of intact unions by duration. 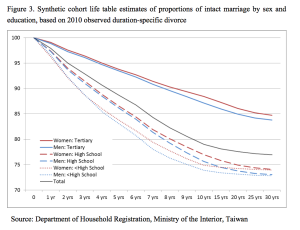 Figure 3 shows that about 11% of marriages would dissolve within 5 years, 21% within 10 years, and 23% before their 30th anniversary. Divorce risks are slightly higher for men than for women in all educational groups, and much higher among the low than the highly educated. The educational gap in the proportions of intact marriages between those with and without tertiary education expands rapidly after one year of duration: for instance, about 16-17% of marriages dissolve within five years for the less educated, but less than 7% for those with tertiary education.

The implications of social disparities in divorce 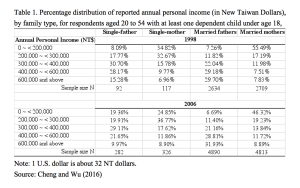 Parenthood has a significant impact on children, and the pattern again varies by gender. While there are no educational differences in parenting practices found among single mothers, the level of parental involvement with children is much lower among less educated lone fathers. (Cheng and Wu 2016)

Moreover, in Taiwan marriage rates have declined much faster among the less educated men and women than among their more advantaged counterparts (Cheng 2014), and remarriage rates for the disadvantaged are lower among them than for the better educated (Ministry of the Interior 1975-2015).

Overall, these patterns suggest that the less educated are and will be spending an increasingly large proportion of their lives outside a marital union, either as permanently single or as previously married individuals. As less educated individuals have less human capital and fewer socioeconomic resources at their disposal, the combined consequences of higher divorce risk and lower remarriage chances may more strongly impact their life outcomes, for instance by depriving them of the extra safety net provided by family support in old age. While policy makers and public discourses often focus on the disadvantages of single-mother families when considering the consequences of divorce, the findings here call for more attention to the well-being and development of all adults and children in disrupted families with limited resources.

Cheng, Y.-h.A., and Wu, F.-c. (2016). Going it alone and adrift: The socioeconomic profile and parental involvement of single-father and single-mother families in post-industrial Taiwan. Journal of Population Research 33: 147-172.

De Graaf, P.M., and Kalmijn, M. (2006). Change and stability in the social determinants of divorce: A comparison of marriage cohorts in the Netherlands. European Sociological Review 22(5): 561-572.

Härkönen, J., and Dronkers, J. (2006). Stability and change in the educational gradient of divorce: A comparison of seventeen countries. European Sociological Review 22(5): 501-517.