Up until the 1970s, the Latin American and Caribbean region stood out for its high levels of fertility. Decline was rapid in subsequent years, but adolescent fertility in the region is still a concern: it is the second highest in the world, after sub-Saharan Africa (Figure 1). 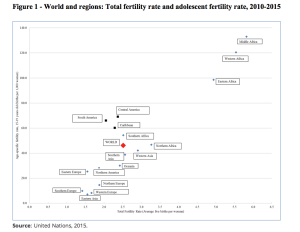 According to the latest censuses and surveys, approximately 30% of women become mothers before their 20th birthday (MATERNILAC online database), and this proportion has increased since 1990 despite a fertility reduction at these ages. This has happened because, while second and higher order births have become rarer in this population, first births occur now even more frequently than they did 20 years ago.

Proximate determinants (or: “how to get there”) 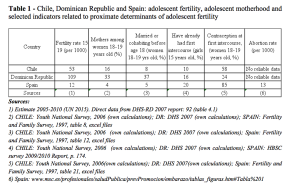 Contraception, for which comparable information is available, appears to be the key proximate determinant, as Table 1 shows: “protected” sexual debut was almost universal in Spain at the end of the 20th century, while Chile and the Dominican Republic lagged far behind. However, Table 1 offers another insight, illustrating the distinction between the traditional model of adolescent fertility in the Dominican Republic (where early cohabiting unions and the infrequent use of contraception within these unions lead to high adolescent fertility), and the hybrid model of Chile, which is neither traditional (because early unions are rare, but sexual relations usually precede cohabitation), nor modern (because protected sexual debut is far from universal).

So, high adolescent fertility results from a combination of early sexual debut in almost all countries, high levels of adolescent cohabitation in some countries, insufficient access to contraception from the very start of sexual life, and very limited access to abortion, if at all (Rodriguez, 2013).

This issue is not new in Latin America (Esteve and Florez-Paredes, 2014; Bozon, Gayet and Barrientos, 2009). In 2007, Hopenhayn and Rodriguez judged high adolescent fertility in the region to be perplexing, worrying, and challenging. Although there has been some progress in policies and outcomes ― for instance a reduction in the proportions of adolescent mothers during the first decade of the 21st century in most Latin American countries ― the judgement is still valid.

Why is it perplexing?

Over the last 25 years, Latin American countries have experienced sustained urbanization, a steady increase in educational coverage and growing female labor market participation (ECLAC, 2014). These changes have contributed to the global fertility decline, but they have been insufficient to delay the timing of the first child, especially among lower socioeconomic strata (Cavenaghi and Rodriguez, 2014). For instance, most girls complete their primary education and enter high school, but in some cases they learn so little, and their expectations are so low, that they have no strong incentive to avoid pregnancy (Menkes and Suarez, 2013; Oliveira and Melo, 2010; Pantelides, 2004).

Why is it worrying?

In addition to its well-known deleterious effects on health, school attendance and performance, and job opportunities, early motherhood is a major link in the chain of intergenerational reproduction of poverty, because middle and upper class adolescents, contrary to those from the lowest classes, are nowadays postponing their first pregnancy (Rodríguez, 2013).

Last but not least, while levels of unplanned births among adolescents are high and growing in Latin America (Rodriguez, 2013), a sizeable minority of these teenagers wants a child very early, which is itself an alarming indicator of their life ideals.

Why is it challenging?

When dealing with high adolescent fertility, family planning programmes that target cohabiting women, important as they may be, are not enough (UNFPA, 2013; Juarez et al, 2010; Bearinger et al, 2007). In a region where a growing percentage of young people have first intercourse before marriage or cohabitation, more youth-friendly sexual health and reproductive health services are needed.

According to the Montevideo Consensus, the most relevant regional agreement on population and development (ECLAC, 2013), these programmes must provide “health and reproductive health services with a gender, human rights, intergenerational and intercultural perspective, which guarantee access to safe and effective modern contraceptive methods, respecting the principles of confidentiality and privacy, to enable adolescents and young people to exercise their sexual rights and reproductive rights”.

Several countries in the region are implementing this kind of service, but there are still huge challenges ahead in terms of budgets, training of human resources, service models, empowerment of target populations, legal and institutional arrangements and cultural support (including the widespread acceptance of the principle of confidentiality). These programmes will have a greater chance of success if they are accompanied by comprehensive and pertinent sexual education modules, as well as social policies and changes aimed at offering activities, hobbies, interests, and projects as alternatives to motherhood, i.e. a better future for Latin American and Caribbean adolescents.

Cavenaghi Suzana and Jorge Rodriguez (2014), Adolescent and youth fertility and social inequality in Latin America and the Caribbean: what role has education played?, GENUS, LXX:1, 1-25