Deaths exceed births in most of Europe, but not in the United States, and not in Texas
Plus de décès que de naissances dans la plupart de l'Europe, mais pas aux États-Unis, et pas au Texas

Prevalence of natural decrease.
In the first decade of the 21st century (2000-2009), 58 percent of the 1,391 counties of Europe had more deaths than births compared to just 28 percent of the 3,141 counties of the U.S. In Texas, for instance, 24 percent of the state’s 254 counties had more deaths than births. With a population of nearly 27 million people, Texas is the second largest state in the U.S., after California. If Texas were a European country it would be the tenth largest country of Europe, surpassed only by Russia, Germany, Turkey, France, the U.K., Italy, Spain, Ukraine and Poland. Texas itself is not characterized by natural decrease, but one-quarter of its counties are. Many of the factors associated with natural decrease in Texas are the same as those associated with the phenomenon in other large states of the U.S., e.g., California, Florida and New York. Our discussions of natural decrease in Texas therefore would be somewhat similar to discussions of the phenomenon in other states, especially the larger states. 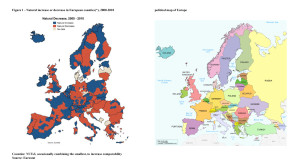 In Europe (Figure 1) deaths exceeded births in most of the counties of Germany, Hungary, Croatia, Romania, Bulgaria and the Czech Republic, as well as in Sweden and the Baltic States. Further south, natural decrease is found occurring in the majority of the counties of Greece, Portugal and Italy. Though natural decrease was common in much of Europe, it was far from universal. Natural increase (more births than deaths) is widespread in Ireland, Cyprus, Iceland, Lichtenstein and Luxembourg. Natural increase is also evident in broad regions of France, Belgium, the Netherlands, Switzerland, United Kingdom and Norway.

Almost one-quarter of the counties in Texas had natural decrease in the first decade of this century, and 27 percent in the 2010-2014 period. The natural decrease counties in Texas are mainly in a band running from the north to the south through the middle of the state (Figure 2). Some are agricultural counties with more deaths than births owing to the outmigration of young people; others are retirement counties, mainly located in south Texas and in the Highland Lakes area, with more deaths than births because of increased numbers of elders in the counties.

In Texas, 47 of the 61 natural decrease counties, or 71 percent of them, lost population between 2000 and 2010. Some of these are located in south Texas in the Eagle Ford Shale, one of the largest oil and gas development areas in the world based on capital invested. The Eagle Ford area began to be developed around 2008. Almost $30 billion was spent there in 2013 alone in gas and oil activity. These developments brought thousands of oil and gas workers into the area, many of them with families having babies, so that many of the natural decrease counties are now natural increase counties. But once the oil and gas developments start decreasing in size and magnitude, counties in the Eagle Ford Shale will return to having more deaths than births and will no longer increase in population size.

Though natural decrease is much more prevalent in Europe than in the U.S. and in Texas, the demographic factors that cause natural decrease are remarkably similar. Three critical demographic phenomena increased the likelihood of natural decrease: a large concentration of older adults, a smaller proportion of women of child-bearing age, and a low fertility rate. European counties are in a more precarious situation on each of the three. Fertility rates in Europe are significantly lower than in the U.S. and Texas. And deaths are also more likely to exceed births if there is a larger older population at higher risk of mortality and if there are fewer women of childbearing age to have children.

Natural Decrease and the Future

Natural decrease is likely to loom particularly large in Europe’s future. There are relatively few young women to produce the next generation of European infants. In a typical European county, only 15 percent of the female population is younger than 15, compared to 20 percent in the U.S. And European fertility is expected to remain well below U.S. levels. With a diminishing population in the child-bearing ages, low fertility, and a growing older population at high risk of mortality in much of Europe, widespread natural decrease is almost inevitable. Europe has also had little immigration over the past several decades, and this has likely exacerbated the increased incidence of natural decrease.

Ireland’s willingness to accept immigrants makes it an important exception to overall European trends and it underscores the potential role of immigration to the European future. No Irish county experienced natural decrease during the period we studied. Ireland as a country has 15 births for every 6 deaths. Immigration to Ireland, mainly from Poland, Lithuania and Latvia, has been substantial and the large proportion of these primarily Catholic immigrants in their child-bearing years with relatively high fertility rates certainly helped Ireland fend off natural decrease. In essence, these Irish immigrants are an analog to the young Hispanic immigrants to the U.S. that diminished the incidence of natural decrease in many U.S. counties.

Finally, we note that the recent surge of immigrants into Europe from Syria and other countries provides an interesting example of how some European countries are not responding in a similar way with regard to accepting them. Germany, Europe’s second largest country, is a natural decrease country, with 11 deaths for every 8 births. If these fertility and mortality patterns were to remain unchanged into the future, Germany’s population of 81 million would significantly shrink in the near future. It is not a surprise, therefore, that Germany has been one of the more welcoming of the European countries to these non-European migrants, who are younger and with a higher fertility than Germany’s TFR of 1.5. In contrast, Hungary, another natural decrease country, with currently 13 deaths for every 9 births, is at best reluctant about accepting the new migrants, if not outright disdainful of them. Many Hungarians fear their Christian (largely Catholic) heritage will be imperiled by the heavily Muslim immigrants. Germany’s response is likely to produce a far different demographic future than Hungary’s.

Natural decrease is the ultimate demographic consequence of population aging and of low fertility that now characterize much of Europe and a growing part of the United States. Natural decrease is likely to become more prevalent in future years. In fact, it is already on the rise. Data for the post-2010 period suggest that deaths now exceed births in 62 percent of the European counties and in 35 percent of the counties of the U.S. Natural decrease is a major policy concern because of its pronounced spatial clustering and its capacity to drain the demographic resilience from an area. In Europe, worries are already widely expressed in both media and public policy circles about maintaining the region’s economic viability and competitiveness in the face of the low birth rates and aging populations that characterize its natural decrease areas.