Some older adults do not have spouses or biological children, i.e. the types of family members who are most likely to provide help in case of need. Rachel Margolis and Ashton M. Verdery discuss the demographic causes, the prevalence and the likely future evolution of “kinlessness” around the world.

In a recent article (Verdery et al. 2019) we examined the prevalence of kinlessness among adults over age 50 around the world, the demographic processes that may explain this prevalence, and the associations between kinlessness and health and well-being. We document extensive cross-national variation.

Demographic processes strongly correlate with national prevalence of kinlessness. In fact, current levels are predicted by fertility and marriage rates from decades ago. Given that low fertility and lower rates of marriage have spread throughout all regions of the world, we expect to witness increasing rates of older adult kinlessness in the future. This potential growth has important but heterogeneous implications for the global health and well-being of older adults.

Many studies have found that as older adults age, their social networks shrink due to less contact with co-workers and friends (e.g. Cornwell, Laumann and Schumm 2008). This means that they often rely heavily on family members for help with health problems, economic insecurity, and social interaction. Recent research on the characteristics of older adults in the United States with no living kin has found that they tend to be disadvantaged in terms of health and economic security (Margolis and Verdery 2017).

The demographic changes that have led to an increasing population of kinless older adults in the United States – low fertility, childlessness and increases in non-marriage and divorce – are also occurring elsewhere in the world (Glaser et al. 2006; Raymo et al. 2015). However, the parallel trends of mortality decline and of increases in remarriage, non-marital partnerships and step-families may blunt the effects of this increase.

How common is it for older adults to lack a spouse and children?

We examined how common it is for contemporary older (50 years and over) adults around the world to lack living kin, the demographic correlates of this prevalence, and whether such individuals are uniformly disadvantaged across contexts. To do this, we analyzed survey data from 34 countries that together make up 70% of the world’s population over age 50 and come from all areas of the world. We did the best that we could to include sources from understudied regions like Africa, Southeast Asia and Latin America. From each data source, we used the most recent survey year that was nationally representative of the older adult population to get the most current estimates of kinlessness (1988-2015). Because we were examining data from so many contexts, we focused on measures that were available and reasonably comparable across surveys: whether the respondents had legally recognized marriages, for example. In our previous research on the United States and China, we found that rates of kinlessness vary little when our estimates include non-marital partnerships, because most older adults in non-marital partnerships already have children (Margolis and Verdery 2017; Zhou et al. 2019). As we could not capture the geographic proximity of family members in most surveys, this analysis is a conservative estimate of older adult family isolation, since having a kin tie is necessary but not sufficient for having a relationship with that family member.

There is great variation in the prevalence of older adults lacking close kin, i.e. a spouse or a living child (Figure 1). The percentage is highest (10-11%) in Canada, Ireland, the Netherlands and Switzerland. In Austria, Belgium, Croatia, Estonia, France, Germany, Greece, Hungary, Italy, Luxembourg, Poland, Slovenia, Spain, Sweden, Thailand, and the United States levels range between 6% and 10%, and in Costa Rica, Czech Republic, Denmark, Israel, Japan, Mexico, Portugal, Russia, and South Africa they are between 3% and 6%. A last group of countries has very low levels of kinlessness, about 2% or lower, and these countries are all in Asia: China, India, Indonesia, Malaysia, and the Republic of Korea. 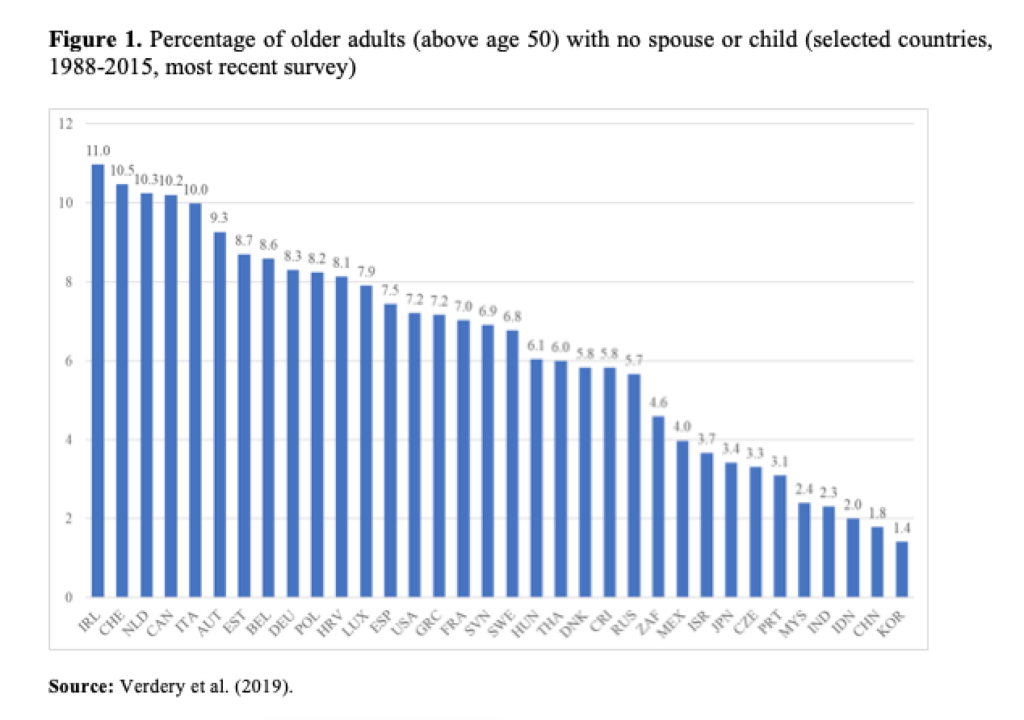 We also examined micro-level associations between lacking a spouse and children and sociodemographic and health indicators and found that characteristics of the kinless population of older adults vary considerably across countries. Table 1 highlights the countries where older adults without family are more – or less – likely to be male vs. female, in fair or poor self-rated health vs. good health, have low education given their context, and live alone vs. live with others; all results are adjusted for age. There is no causal direction assigned to these associations. For example, one could be kinless due to extreme poor health, or in poor health due to a lack of close kin, or the association could be linked to other social factors. 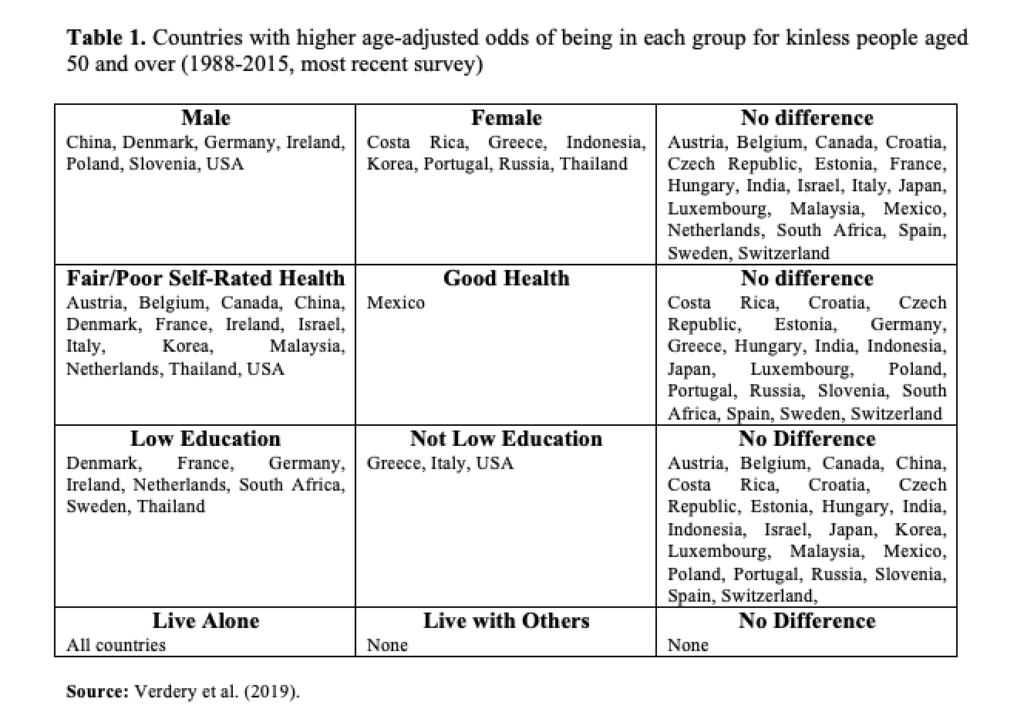 We find that in most countries, older adults without close kin have equivalent or worse self-rated health and lower education than their counterparts with family, although there are some notable exceptions in the middle column. We also find substantial variation in the gender composition of the kinless population. For example, in China, it is predominantly male. Many other countries, including Ireland, Denmark, Slovenia, Germany, and Poland, also have more men than women among kinless older adults, controlling for age. Yet others, such as Indonesia, Portugal, Thailand, Greece, Canada, and Russia have more kinless women than men, controlling for age. Still others are in the middle, with no age-adjusted tendency for the kinless to be men or women. Although we find that kinless older adults in all countries are more likely to live alone than older adults with kin, we also find substantial variation in the odds of this across different contexts. For instance in Mexico, kinless older adults are 3.1 times more likely to live alone than those with kin, but in Greece, they are 45 times more likely to be living alone.

Our rough estimate is that 3.8% of the adults 50+ (43.6 million) in the countries we examined do not have a spouse or biological children. As global fertility decline continues, and childlessness and non-marriage continue to spread throughout many global regions, we will likely see more older adults lacking spouses and children. In addition to a likely increase in the percentage of older adults lacking close kin, their number is also likely to grow because of both population aging and population growth. The rise of older adults with no close family members presents challenges for policy-makers, and innovative social policies will be needed to ensure their future well-being.

The authors acknowledge funding from the multi-country project, “Care, Retirement and Well-being of Older People across Different Welfare Regimes” (CREW).

Margolis, R., & Verdery, A. M. (2017). Older Adults Without Close Kin in the United States. The Journals of Gerontology, Series B: Psychological and Social Sciences.

Zhou, Z., Verdery, A. M., & Margolis, R. (2019). No Spouse, No Son, No Daughter, No Kin in Contemporary China: Prevalence, Correlates and Differences in Economic Support. The Journals of Gerontology Series B: Psychological Sciences and Social Sciences. 74(8):1453-1462.