A striking contrast in demographic and development indicators emerges from a recent analysis of the 640 districts of India, which Sanjay K. Mohanty, Udaya S. Mishra, Rajesh K. Chauhan and Sayantani Chatterjee summarize for N-IUSSP. Population growth, child sex ratio, ageing and educational achievement respond to local levels of development, although not always in a linear manner. Gender disparities in education, which persist beyond primary level, are spread across the country.

India is probably known to most N-IUSSP readers for its macro characteristics, which are often compared to those of other large developing countries, as in Table 1. The picture that emerges is mixed: a synthetic measure like the human development index (HDI) indicates that India occupies an intermediate position, behind Brazil, China, and Indonesia, but ahead of Bangladesh, Pakistan, and Nigeria.

This article, however, does not set out to compare India internationally; rather, it focuses on its internal heterogeneity, which is extremely high – higher than what most N-IUSSP readers probably imagine. Indeed, the famous north-south dichotomy is not limited to demography but concerns several key domains of human development, education, health and income. Regional differences and disparities with respect to each of these domains are analysed in depth in a recent book (Mohanty, Mishra and Chauhan 2019); here we highlight a few of the most interesting features that emerge.

Our unit of analysis are the 640 Indian districts. These are reasonably large (some 2 million inhabitants each, on average) and at different stages of their demographic transition, with wide differences in terms of growth rate, age and sex structure, fertility, mortality, and migration. Not surprisingly, they also exhibit huge disparities in socio-economic development, which is here measured with the district development index (DDI), a composite indicator ranging between 0 and 1, which is analogous to the more famous HDI, and combines social, health and economic variables (Mohanty et al 2019).

Figure 1, illustrating the mean level of the DDI in 2011 across a range of population growth rates between 2001 and 2011, displays a very distinct U shape. Moderate population growth is associated with higher development; however, robust population growth rates characterize not only relatively backward areas (with high fertility), but also highly dynamic and urbanized districts, on the right of the scale, because they attract migrants. 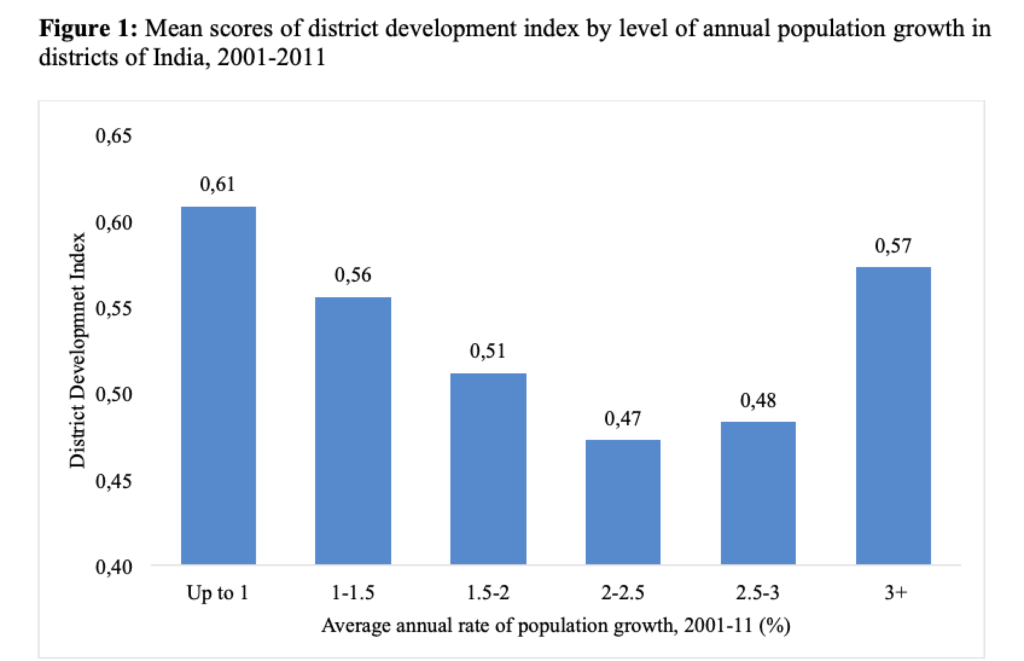 Child sex ratio (CSR), defined as the number of girls per 1,000 boys aged 0-6, has been declining in India over the last two decades, and this is a major concern to both national and state governments. Figure 2 plots the CSR by DDI for the Indian districts in 2011. This indicator is very frequently below, sometimes largely below, its “expected” value of 952 (horizontal violet line). It is generally higher in less developed districts (DDI below 0.4), and tends to decrease in the more developed one (DDI above 0.6), although the trend is slightly masked by an increase in the variability of the phenomenon (right part of Figure 2). Son preference (which often translates into sex-selective abortion) is surely the main cause of this pattern: low fertility levels in a good number of the more developed districts are associated with (and lead to) low CSRs. 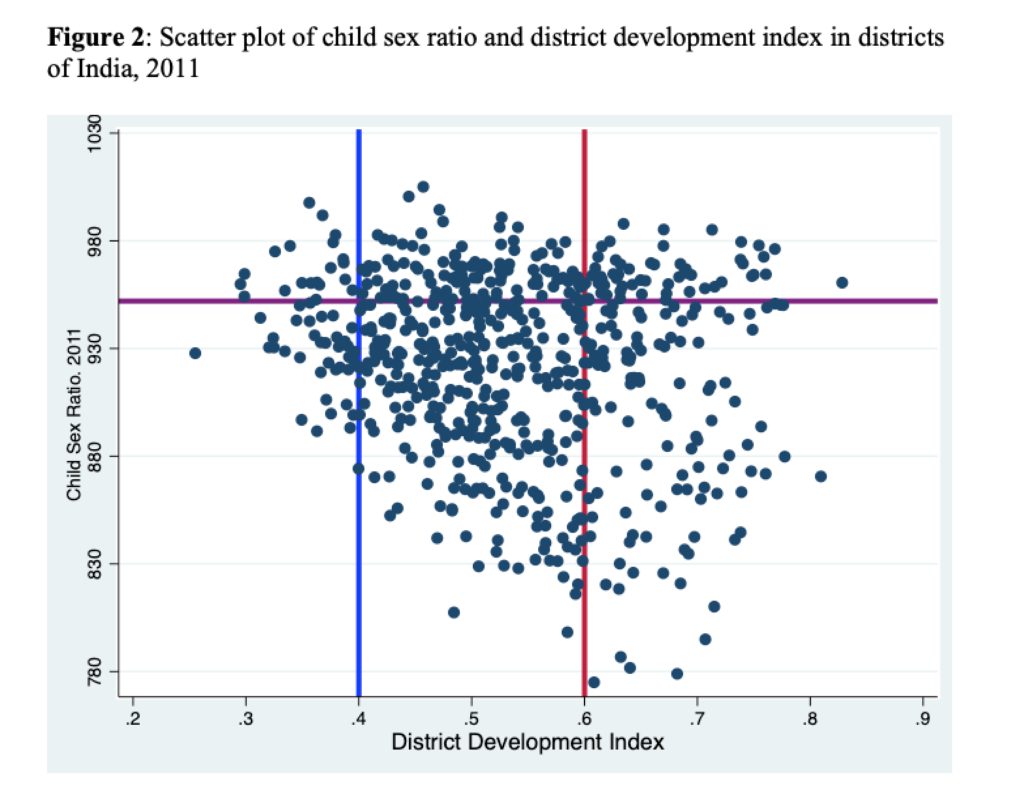 Along with fertility transition and rising longevity, the size and share of the older population (e.g., aged 60 and over) is increasing in India. On average, districts with higher level of development have higher proportion of older adults (Figure 3). Districts where this share exceeds 10% (the horizontal line) typically have medium or high levels of development. Deviations from this pattern are probably caused by migration to the more developed districts, because migrants are typically of young working ages. Even here, however, declining fertility and improved survival will eventually lead to ageing: provision of healthcare, pensions and social support to the elderly will be a formidable challenge in the coming years. 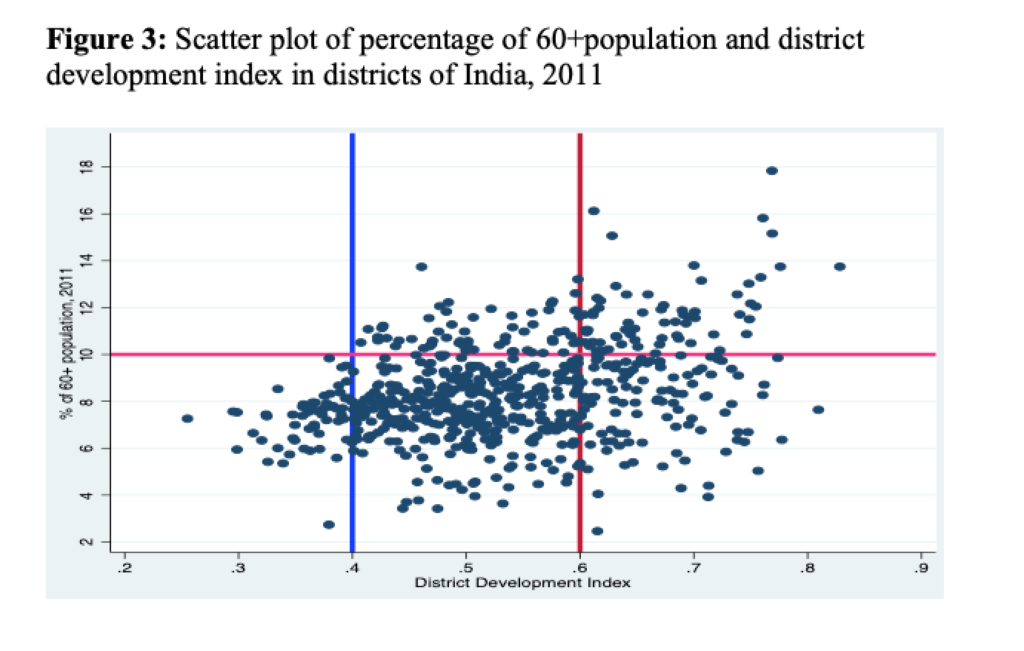 The conventional educational indicators fail to capture the geographical variations and gender gap in educational progress in India. For instance, while gender gaps in literacy and primary enrolment are narrowing, they remain disparate at higher educational levels. This is clearly shown by a gendered analysis of the Educational Progression Ratio (EPR), the probability of attaining higher secondary level by those who completed their junior secondary education (Chatterjee and Mishra, 2019).

As Figure 4 shows, inter-district variations in EPR are extremely large and responsive to the differential levels of development across districts. However, at all levels of DDI, EPRs are consistently lower for females than for males. 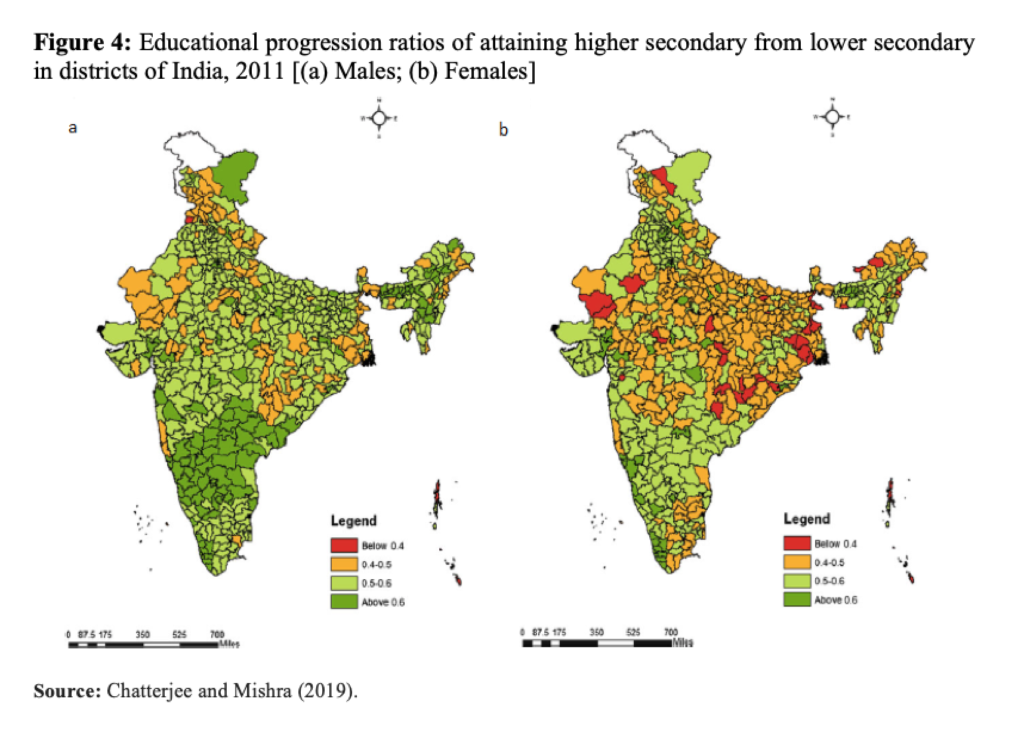 Districts of India remain highly heterogeneous in both demographic and development terms, with no apparent signs of convergence, yet. As the divergence is not limited to the few dimensions illustrated here, the need for policy intervention arises. In our opinion, the key dimensions on which to intervene, among the many that are needed, are:

3) identify districts with an urgent need for development intervention, within and across states.

Without these, or similar, policy actions, there are reasons to fear that the already existing, profound inequalities of the country will soon grow even larger.