Heeju Sohn quantifies the diverging kin networks of adults with low and high socioeconomic status (SES) in the United States. In 2013, high SES adults had about 13 years with parents who were alive and living with each other, while low SES adults had only about 6.5 years. Rising single-parenthood and lagging life expectancy among low SES families are resulting in greater inequalities in kin networks.

When people experience hardship or uncertainty, they often turn to kin for support. Parents are frequent sources of support such as emergency childcare, a down payment on a house, or a place to stay during bouts of unemployment. Parents’ sense of obligation towards their children usually extends beyond the very early phases of their lives, and parents often view their resources as a safety net for their children. Therefore, the longer and healthier the parents live, the longer adult children can benefit from them. It is also the case that adult children whose parents are still married to each other receive more help than children whose parents never married or divorced (Silverstein & Bengtson, 1997).

Inequality in safety nets in the US

Demographic trends in the United States in the past half-century have created unequal parental safety nets between people with different socioeconomic resources. While people are living longer overall, improvements in life expectancy among people with low SES (socio-economic status) are lagging (Sasson, 2016). And while divorce rates have been decreasing among high SES people, non-marital childbearing, single parenthood, and divorce have maintained their historical highs among people with low SES (McLanahan, 2004). These trends portend a fraying of the family safety net for people with few socioeconomic resources.

Do people with low socioeconomic status have potentially weaker parental safety-nets now than before? And what demographic factors contribute to this rising inequality? These questions are often difficult to study, because parents and adult children typically live in different households. In a recent publication (Sohn, 2019) I addressed the data challenge by applying the Brass Orphanhood method on the Panel Study of Income Dynamics (PSID). The PSID is a multi-generational dataset that is nationally representative of the United States. In 1988 and in 2013, respondents were asked whether their parents were still alive, and if so, whether they were married to each other. These responses can be used to create and decompose multi-state life tables of parents’ survival and marital status by their children’s age, SES, and cohort. The analysis focuses on the parental safety-net between age 25 and 49 when the adult child may rely on their parents for support as they start new careers, buy first homes, and start families.

High SES adults in both 1988 and 2013 spent about 13 years with both parents alive and together (Figure 1). A small increase in single-parenthood among their parents between 1988 and 2013 was almost entirely offset by a rise in their life expectancies (Sohn, 2019). The story is starkly different for low SES adults, however. In 1988, these spent about 11.5 years with two parents who were married to each other, but in 2013 this condition lasted for only 6.3 years.¹ And as many as 62 percent of low SES adults in 2013 spent the entirety of their young adulthood (age 25 to 49) without parents who were married to each other (Figure 2); by age 25, only 38 percent had two married parents. 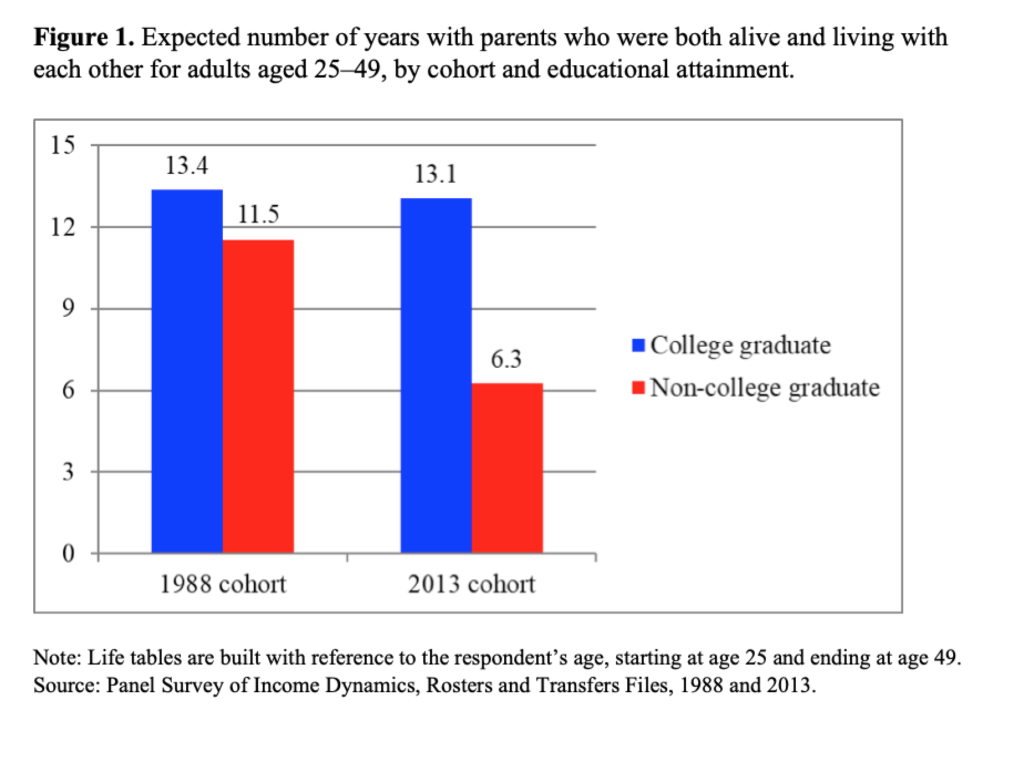 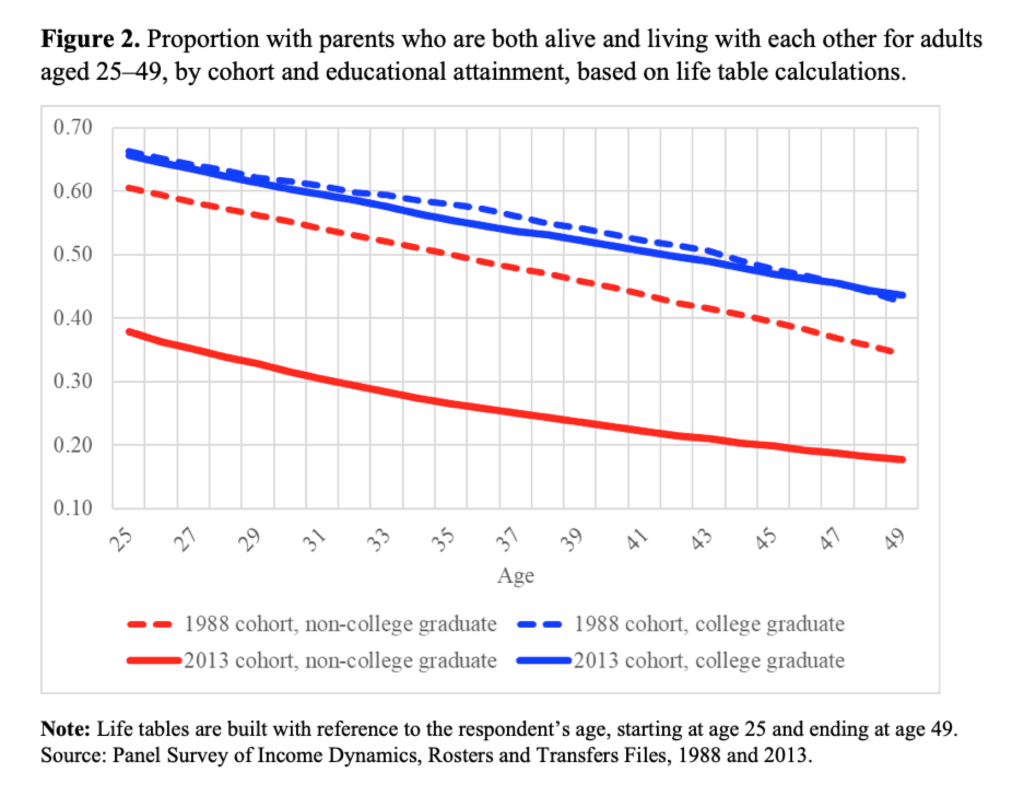 In 1988, the death of the father was the primary reason why parents were not living together for both low and high SES adult children: about 10 percent of adults would have experienced the death of a father in the first 10 years of early adulthood. Fathers were living longer in 2013, but this improvement in life expectancy is completely overshadowed by the large rise in the proportion of parents who were never married or divorced. While parents’ union dissolution increased for both high and low SES adults, the rise was significantly greater among parents of low SES adults.

Figure 3 shows the formal decomposition of the increasing disparity in the number of years low and high SES adults have with parents who are married to each other. In 1988, differences in parents’ life expectancies accounted for 97 percent of that disparity, while parents’ non-marital childbearing and divorce accounted for only 3 percent. In 2013, 63 percent of the large socioeconomic disparity was due to the differences in parents’ non-marital childbearing and divorce. 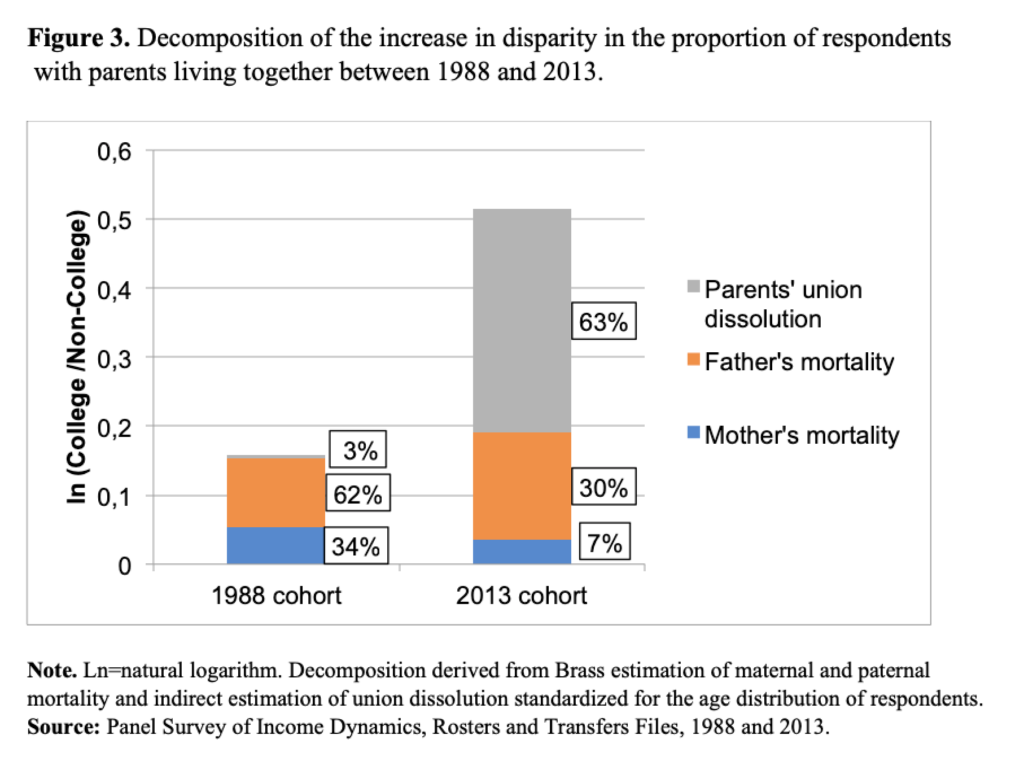 Implications for the next generation

Sarah Mclanahan foreshadowed the “diverging destinies” of high- and low-SES families 15 years ago (McLanahan, 2004). Fifteen years later, I show that the effect of growing up in single-parent families extends into adulthood and is setting up weak kin networks for the next generation of children. In the case of the United States, people who are already disadvantaged in many socioeconomic dimensions are also disadvantaged when it comes to kin-based support. People are living longer, and relationships between grandparent and grandchild are becoming more consequential, and yet, the benefits are likely muted for low SES families.

Low SES adults, who are more likely to be single parents themselves, spend more years with divorced or widowed parents who may not be able to provide emotional and material support. Having a single parent as an adult also increases the risk of becoming a member of the “sandwich generation”, providing care to both young children and aging parents. Children of these low SES adults likely receive less of their parents’ and grandparents’ resources than children of high SES adults who start life with the support of both their parents and grandparents.

¹ These are synthetic measures, which means that they were calculated on the data of a single year (1988 and 2013, respectively) and express what would happen to a cohort of individuals who lived their entire life in those conditions.