Our research (Bernardi & Boertien 2016a; 2016b) has led us to the conclusion that, while children growing up without one parent in the household do have lower educational attainment, family structure does not increase inequality in educational opportunities between socioeconomic groups. This work thus invites scholars and policy-makers aiming at reducing inequality of opportunity for children to shift and extend their attention to include other factors, beyond family structure. Let us consider the authors’ arguments.

Who is more affected by parental separation?

Various scholars (Cherlin, 2014; McLanahan and Percheski, 2008; Putnam 2016; Wax 2007) have claimed that family structure (and single motherhood in particular) is an important factor explaining differences in life outcomes across socioeconomic groups in Western countries.

This claim is based on two assumptions. Firstly, growing up without a parent in the household is associated with lower educational attainment. Secondly, in several Western countries it is especially common for children from lower socioeconomic backgrounds to live without at least one parent. Family structure thus exacerbates the disadvantages already experienced by children of lower socioeconomic status families. However, this strand of research relies on the assumption that everyone is affected equally by growing up in different types of family structures. In their study on educational attainment in Britain, Bernardi & Boertien (2016a) conclude that this assumption does not hold: growing up with a single parent actually entails larger negative consequences for children from higher socioeconomic backgrounds. 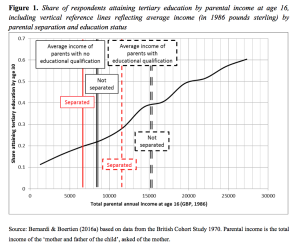 Using family income as a key explanatory factor reveals the same pattern. Figure 1 displays how the chances of attaining university education varies by family income (the vertical lines indicate the average income of different family types). For parents with the same level of educational qualifications, the average income is lower among those who experienced separation, as separation entails an economic cost. In addition, income differences between separated and intact families are larger when parents have more schooling. Moreover, among children of more educated parents, family income is more consequential for their tertiary education attainment: for the same amount of income loss (for instance 1000 pounds sterling in 1986, the year in which family income was measured), the reduction in the share attaining tertiary education is larger among children of highly educated parents.

Parents with less education have relatively low family income, whether they separate or not. For these families, reductions in family income are relatively inconsequential for their children’s educational attainment, as little money is available for university education in the first place.

To sum up: the study for Britain suggests that children from lower socioeconomic backgrounds are more likely to grow up without a parent present in the household, but they also tend to be affected less by this absence. Other studies suggest that this pattern might hold in other countries too (Bernardi and Radl 2014). To what extent, then, does family structure contribute to the inequality of educational opportunities by socioeconomic background?

Parental separation has a comparatively minor effect on inequality of opportunity 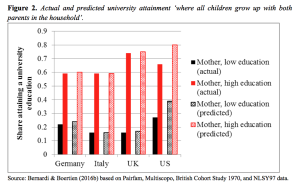 The lighter bars in Figure 2 are estimates of educational attainment for different groups in the hypothetical situation where all children have grown up with both biological parents present in the household. The lighter bars are slightly higher than the darker bars, suggesting that university attainment overall would be higher if all children were to grow up in an intact family. The differences in predicted attainment between groups, however, remain unchanged, suggesting that family structure cannot explain why children of lower educated mothers have lower levels of university attainment than children of higher educated mothers. Why is this the case?

On average, children in these countries who did not grow up with both parents in the household are 10 percentage points less likely to attain a university degree than children who did. This is a non-negligible difference, but at the same time relatively small compared to the impact of other factors (such as maternal education) and therefore not big enough to lead to considerable differences in inequality of opportunity.

Besides this general reason, each country has a specific story. In Italy, it is still relatively uncommon for children to grow up without both parents present in the household, therefore limiting the role of parental separation. In Germany, the prevalence of different family structures appears similar across socioeconomic groups and therefore does not differentiate opportunities. In the UK and the US, it is more common for children of lower educated mothers to grow up without a parent in the household. Nevertheless, as illustrated above, the consequences of growing up without both parents appear to be greater for children with more educated mothers. This counterweighting factor cancels out any amplifying effects on inequality of opportunities among children of less educated parents due to their higher prevalence of growing up without both parents present.

Bernardi F. & Boertien D. (2016a). ‘Understanding Heterogeneity in the Effects of Parental Separation on Educational Achievement in Britain: Do Children from Lower Educational Backgrounds Have Less to Lose?’ European Sociological Review, 32, 807-819.