Using European panel data from 2003 to 2011 (EU-SILC), Angela Greulich, Mathilde Guergoat-Larivière and Olivier Thévenon show that dual-earner couples are more likely to have a second child than couples with only one earner. This is especially the case for higher educated women and in countries with relatively high levels of institutional childcare. In terms of institutional settings, the implication is that early childcare favors family enlargement more than other family policy instruments.

Women’s rising education and discrepancies in fertility rates in Europe

Fertility levels have declined somewhat in most European countries since the economic recession in 2008, but vary widely across the continent, from near replacement to low, or even very low, especially in Southern, Central and Eastern Europe (Figure 1). This has happened despite the convergence of fertility intentions towards the two-child norm observed in European countries over the last three decades (Sobotka and Beaujouan, 2014). 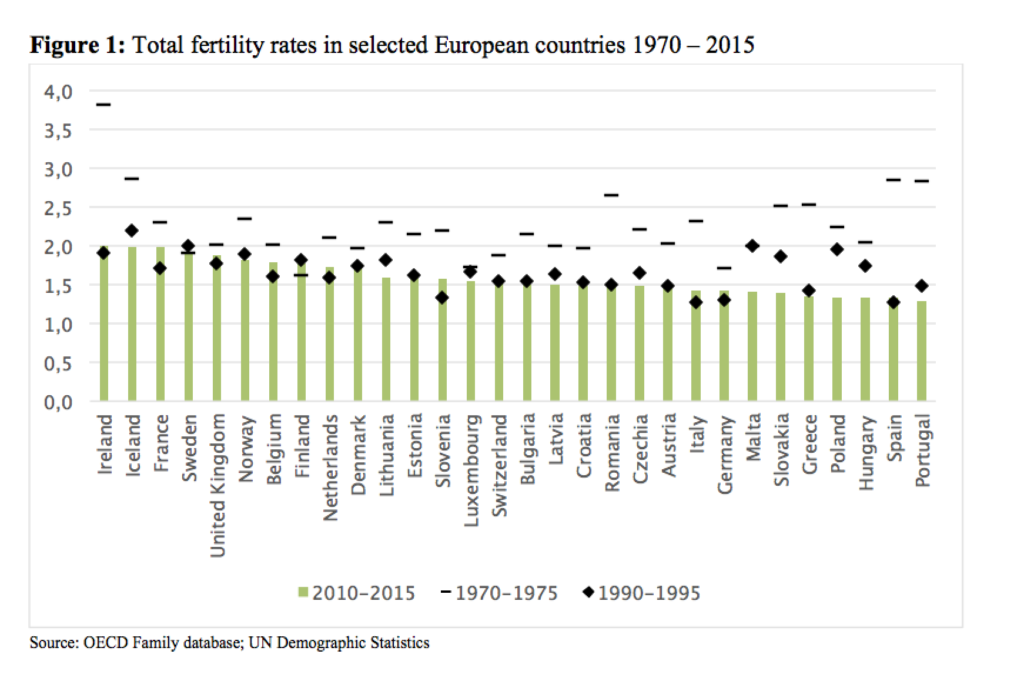 Rising level of women’s education and the incompatibility of work and family life are among the factors usually invoked to explain the fertility decline. In standard economic theory, an increase in potential income makes women opt for work instead of childbearing. This happens because the negative substitution effect (caused by indirect/opportunity costs of fertility, i.e. the potential wage loss for women who stay at home) outweighs the positive income effect (richer couples can afford to bear and rear more children).

However, while the upward trend in women’s education is visible in all countries, fertility rates still vary widely: this means that other factors must be at play. In particular, some institutional settings may change the relative magnitude of substitution and income effects. Indeed, the labor market integration of both partners, along with increased household income, might be seen to favor family formation or enlargement. But achieving such outcomes depends largely on a country’s degree of support for the work-family balance.

We use the EU-SILC database¹ and the OECD Family database to analyze individual and institutional determinants of second childbirths. We focus on second births because several studies have shown that the low fertility levels observed in some European countries are largely attributable to fewer second or higher order births, rather than fewer first births (Frejka and Sardon, 2007; Frejka and Sobotka, 2008; Breton and Prioux, 2009; d’Albis et al. 2017).

By using the four-year rotational panel between 2003 and 2011 for 25 selected European countries, we looked at women aged 17 to 45 who already had one child and observed under what conditions they were likely to give birth to a second child during the observed period. We investigated both individual and institutional determinants by applying several more or less sophisticated models (probit, biprobit, multi-level modelling). Since employment and fertility decisions are often taken simultaneously, we implemented different methods to reduce the risk of biased results due to endogeneity: the use of longitudinal data allowed us to observe the determinants of second childbirth before the event occurred and we also tested an instrumental variable approach. Our instruments were regional unemployment rates, which turned out to be associated more closely with women’s labor market status than with their fertility. 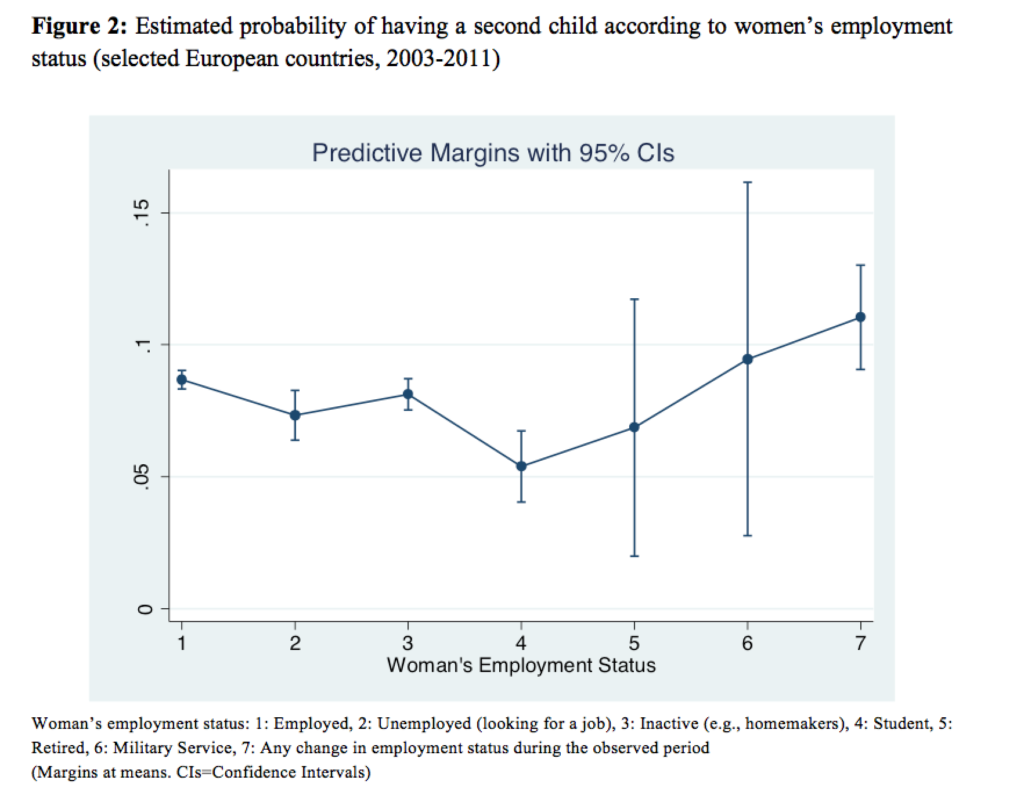 The magnitude of the effect differs, however, according to the women’s other characteristics. For education, for instance, the positive impact of being in employment turns out to be significant only for highly educated women. Our interpretation is that these women, who invested in their human capital (that is, who spent several years in higher education), want a return on their investment (i.e., want to earn some money after all their effort), and therefore want to secure their position on the labor market before they consider having a second child. This may have a large impact, overall, because the proportion of European women aged 30 to 34 who have an ISCED¹ 5-8 level of education (i.e., the highly educated) rose from 23% in 2000 to 44% in 2017. The policy implication of this result is that facilitating women’s labor market insertion may be an effective way to sustain fertility in Europe. 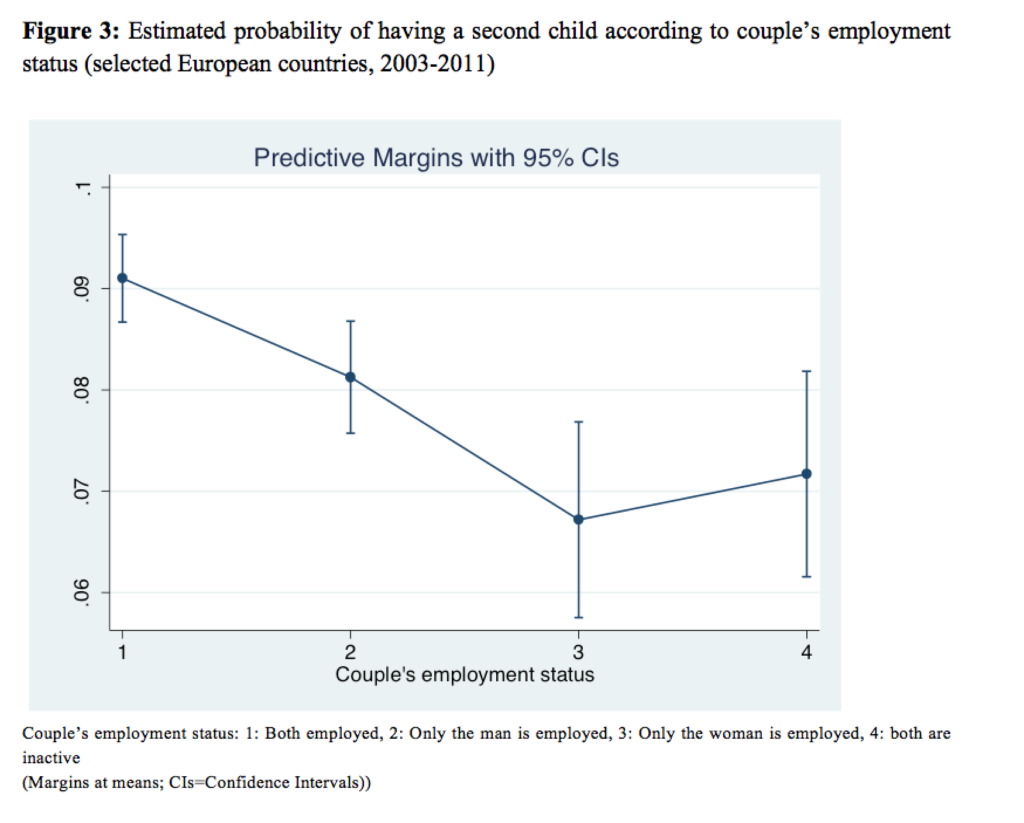 While individual determinants are crucial to explain family formation (age, education level of both partners, age of the first child, employment status etc.), the institutional framework in each country is also an important determinant of fertility behavior. European countries are known to have very diverse family policies. Overall, three main types of policies can be distinguished, namely leave schemes, childcare coverage and cash transfers to families. These three main options are measured in our study through three indicators available from the OECD Family Database: leave schemes are quantified by the maximum duration of maternal leave with employment protection. Childcare coverage is measured by the proportion of children under age 3 enrolled in formal care services, either home- or center-based, and refers not only to public and publicly subsidized care but also to private formal childcare (provided by companies for their employees, for example).² Cash benefits represent the transfers received by a couple with 2 children over a period of 3 years after the birth of a second child (sum of leave payments, family benefits and household tax savings in comparison to the tax burden of a childless household with the same earnings).

Multilevel models reveal that the development of childcare at the country level – the most effective family policy to secure women’s employment – increases the individual probability for women of having a second child, whereas other types of institutional support such as leave schemes or cash transfers do not have such a positive effect. Interacting institutional and individual variables, it also appears that the positive effect of employment on the transition to second childbirth is reinforced in countries with high childcare coverage.

In a context of rising levels of education for women, public policies designed to facilitate the realization of fertility intentions should favor dual employment for parents. Being in employment is favorable to second childbirths, especially for highly educated women. Our research suggests that this ‘high-road’ equilibrium combining women’s employment and replacement fertility rates can be achieved by implementing policies favoring the work-life balance through extensive childcare provision and the stabilization of employment before and after childbirth for both men and women.