The religious landscape in Western Europe is characterised by contrasting trends; while attendance rates at religious services have declined dramatically, over half of the population in this region still identify themselves as affiliated with a particular religion (Voas 2009).

What is the relevance of religion to individual behaviour in these so-called secularised countries? More specifically, does religion still matter for fertility behaviour in Western Europe? Has this relationship changed over time, and how? In order to examine these questions I use data from Britain, France and the Netherlands¹, as these countries have experienced a particularly sharp decline in religious practice as well as in other measures of religiosity over the past decades (Greeley 2003). In this study, I analyse fertility trends across cohorts of women, focusing on the main Christian denominations in each country. Based on this analysis, I argue that religion is still an important factor in explaining fertility differences in Western Europe and, in some cases, fertility discrepancies by religious practice have become more pronounced². However, the intensity of this relationship varies according to the cultural context and religious structure in each country (Peri-Rotem 2016). 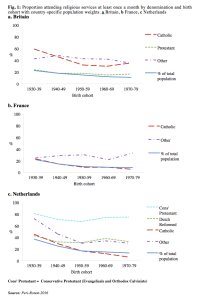 In Western Europe, as in other regions, people from recent birth cohorts are less religious than those born earlier, in terms of both religious affiliation and practice³. Nevertheless, the decline in religious service attendance appears to have slowed down among more recent cohorts (Fig. 1). Furthermore, the majority of the adult population in these countries still identify themselves as Christians.[4] In consequence, three levels of religious adherence can be identified, with unaffiliated individuals at one end of the religiosity scale, and actively religious people, who attend religious services at least once a month, at the other. In between, are nominally religious people, who identify with a particular religion but do not attend religious services on a regular basis. These people, who have been described as “neither obviously religious nor entirely secular” (Voas 2009: 165) comprise the largest group.

The importance of family and children is a common feature of Christian teachings, as in other major religions. According to Norris and Inglehart (2004: 23): “one of the most central injunctions of virtually all traditional religions is to strengthen the family, to encourage people to have children, to encourage women to stay home and raise children, and to forbid abortion, divorce, or anything that interferes with high rates of reproduction”. Since practicing religious women are more likely to comply with religious doctrines about the centrality of family and children, they are expected to have the highest number of children. On the other hand, religiously unaffiliated women, who have the weakest attachment to religious tradition, are expected to have the lowest fertility. In addition, practicing religious people form an increasingly selective group of individuals with strong adherence to religious tradition. Therefore, women in this group are expected to maintain high fertility levels, or experience a more moderate decline in fertility compared to other women, leading to increasing fertility differences between practicing and non-practicing women in recent cohorts.

Religion and fertility across birth cohorts: A growing divide? 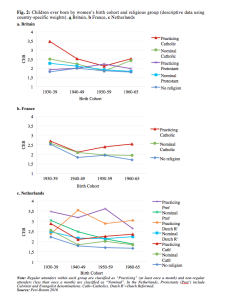 Figure 2 presents the trend in the number of children ever born to women by birth cohort and by the main religious groups in each country. While there are differences across countries in the relationship between religion and completed fertility, practicing religious women tend to have more children compared to nominally religious women. In addition, in all three countries, women who report having no religion consistently have the lowest fertility.

In terms of trends across cohorts, most groups of nominally religious women experienced a substantial decline in completed fertility, to levels that are more similar to those of women with no religion. The fertility of practicing Catholic women in Britain also declined sharply, although they show signs of recovery in the most recent cohort of women born in 1960-65. In France on the other hand, there is a growing fertility gap between practicing Catholic and all other non-practicing women, since the fertility of the former increased in recent cohorts (following an initial decline). A similar divergence is also found between practicing and nominal Protestant women in the Netherlands (including Dutch Reformed and other Protestants). Thus, there is an increasing divide in completed fertility between practicing religious women and those with a weaker orientation to religion, although, this pattern is less pronounced for Britain.

Religious differences in the transition to first birth 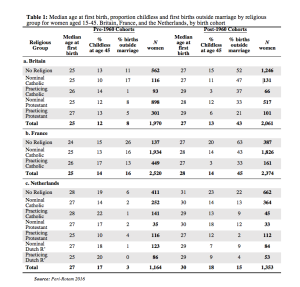 To summarise, practicing religious women consistently display more traditional family behaviours compared to non-practicing ones, including higher fertility levels and lower rates of childlessness and births outside marriage. Furthermore, these differences have become more pronounced among recent cohorts. This trend is partly attributed to the increasing selectivity of practicing religious women, as only the most devout tend to continue attending church regularly. However, this trend may also vary by the particular cultural and religious heritage in each country. For example, the strict separation between church and state in France and the Netherlands, may have further contributed to the divide between practicing and non-practicing individuals, at least in terms of fertility behaviour.

Greeley, A. M. (2003). Religion in Europe at the end of the second millennium: A sociological profile. New Brunswick, N.J.: Transaction Publishers.

¹Data for Britain are derived from the British Household Panel Survey (BHPS 2008, excluding data from Northern Ireland). Data from the Generation and Gender Programme (GGP) are used for France (2005) and the Netherlands (2002-2004).

³According to previous studies (e.g. Voas 2009), the decline in religion across cohorts reflects a generational change rather than an ageing effect (i.e., older people are more religious because they were born at an earlier period in time, rather than due to an increase in religiosity with age). This trend refers to the population as a whole, regardless of religious affiliation.