Is there a gender bias in births and child mortality in Indonesia ?
Peut-on parler de discrimination sexuelle en Indonésie?

Son preference and gender bias, which are revealed in births and child mortality, tend to be concentrated in South Asia, East Asia, Southeast Europe, and the South Caucasus—places where patrilineal and patrilocal family systems prevail. In contrast, Indonesia has been considered virtually immune from excess female mortality and sex selection, thanks to its more balanced bilateral kinship rules in which the father’s and mother’s families play equivalent roles. However, a closer look reveals that the picture is more complex and that distinct forms of gender bias in births and child mortality may exist in several parts of Indonesia.

An increase in the sex ratio at birth has recently been observed in parts of Southeast Asia, such as in Viet Nam or among the ethnic Chinese in Singapore and Malaysia. What about Indonesia? Here, the overall sex ratio of the entire population has also risen over the last thirty years, peaking at 101.2 males per 100 females in the 2010 population census. If we examine the factors linked to gender bias, we may note that fertility is about 2.5 children today and close to or below replacement level in several provinces. At this level of fertility, 19% of Indonesian families would end up without a boy. While officially banned in the country, abortion is rather common, and one source (BKKBN, National Family Planning Coordinating Board) even estimates that over 2 million abortions took place in 2012.

Yet, the key factor behind gender discrimination—the deep-rooted preference for sons—seems absent in Indonesia, where there is little to suggest that boys are generally preferred to girls. Its largest ethnic group, the Javanese, follow a bilateral kinship system; and so do the Sundanese, the Madurese and a large number of other populations. Indonesia may therefore be considered much less patriarchal than in the environments found, for instance, in China and India. Using the 2010 IPUMS census sample, this article examines more closely the regional and ethnic diversity in Indonesia in order to see whether there are any associations between ethnicity, kinship, births and child mortality. 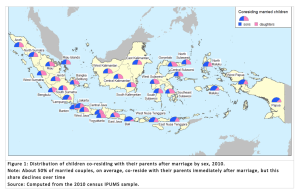 The original map reproduced in Figure 1 shows in particular the post-marital residential arrangements: whether married children who live with their parents are more likely to be males or females. As it happens, the share of sons and daughters co-residing with their parents after marriage is very close to 50% in 2010, confirming the overall prevalence of balanced bilateral practices. Yet, this average picture conceals considerable variations within the country. Patrilocal arrangements (sons staying with their parents after marriage) prevail in all eastern islands from Bali and Lombok to West Timor and New Guinea, but also in parts of Sumatra. In contrast, uxorilocal residence is more common in Java and predominates in West Sumatra, a province inhabited by the matrilineal Minangkabau population.

The impact of gender bias on fertility and mortality

The next step in our study was to look at fertility data to probe whether couples in these various provinces adjusted their reproductive behaviours to the presence of already born sons or daughters. Figure 2 displays the probability of having a third child—what demographers call the parity progression ratio—during the ten years following the birth of the second child. After family reconstruction, we contrast in particular parents with and without a previous son or daughter in the family. In Indonesia as a whole, there is a preference for a mixed sex-composition and a third child tends to be more frequent in the absence of girls or boys (49%) than when both are present (44%). But among patrilineal Balinese, the same analysis demonstrates a staunch desire for sons: among parents without sons, the third birth is sooner and almost twice as frequent as among parents who already had a son (59% vs. 31%). This bias in fertility is also observed among patrilineal groups in Sumatra or in the eastern islands. Among the Minangkabau population of West Sumatra, the situation is somewhat reversed, and it is rather the absence of a female child that tends to exacerbate subsequent fertility (69% vs. 60%). This, to the best of my knowledge, is the only case ever found that indicates an “active” preference for daughters. 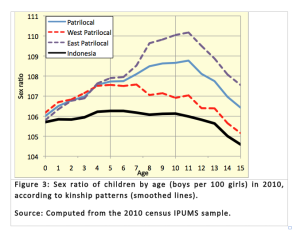 While there is no documentary evidence of prenatal and postnatal discrimination against girls in Indonesia, the 2010 census data point to some intriguing variations across ethnic groups. Figure 3 plots the sex ratio of children below 16. Based on the previous analysis, we identified provinces and ethnic groups with higher levels of patrilocality; and, among them, we further distinguished between the Western groups (Balinese, Bataks, and Chinese) and the Eastern groups (all islands east of Bali except Sulawesi). Not only is the sex ratio rather high at 106 among these groups, it also tends to increase with age between 0 and ten years of the child; whereas higher male mortality should, on the contrary, bring it down. The sex ratio of Eastern patrilocal populations increases especially fast with age and reaches the highest level of 110 at age 10. Various explanations can be advanced, such as enumeration errors; but we believe that among these can also be found the cumulative impact of excess female mortality. Indeed, an additional analysis (not reproduced here) also shows that this sex ratio is suspiciously higher among children who had only older sisters and that female mortality is higher than expected in the eastern islands.

Our anthropological and demographic indicators point to the congruence in Indonesia between kinship systems and various forms of gender bias that are expressed in fertility behaviour, mortality differentials, and sex ratio outcomes. The geographical distribution divides the western part of the Indonesian Archipelago from its eastern part, where Papuan-speaking populations are more common. In the east, patrilocal populations appear to be those with excess female mortality and may follow a demographic regime found in countries east of Indonesia—with a high sex ratio of children below 15 years and excess female mortality in childhood.

Further research employing both field surveys and demographic analysis is needed to document more systematically the mechanisms of gender bias and to distinguish ambilocal Southeast Asian patterns from a more patrilocal Melanesian system. Meanwhile, our study stresses that the anthropological diversity of the Indonesian Archipelago is far more complex than usually assumed, and it points to a geography of gender systems that clearly distinguishes the central island of Java from its more patrilineal periphery.

Kevane, M. and D. I. Levine. 2000. The changing status of daughters in Indonesia. Working Paper Series, Institute for Research on Labor and Employment.