In recent decades, the proportion of individuals living alone has increased in many European countries. Glenn Sandström and Lena Karlsson compare the living arrangements of the working-age population, showing that in more gender-equal countries, gender differences are smaller (also) in this respect and that the highly educated are the least likely to live alone.

With progress in economic development, the share of individuals living in one-person households has increased sharply (Reher and Requena 2018). Living alone is more common in northern and western Europe than in eastern and southern Europe, but is increasing everywhere, and is generally considered unfavourable for social support and health outcomes in later life (Brunner et al. 2018; House et al. 1988).

Our research tried to assess how education affects the risk of living alone at adult ages (30 to 64 years) in 12 European countries characterized by different levels of what we think is an important contextual variable: gender equality (World Economic Forum’s Global Gender Gap Index). Our data source is the Generations and Gender Survey  (and the periods covered range between 2002 and 2013) (Sandström and Karlsson 2019) (Table 1). 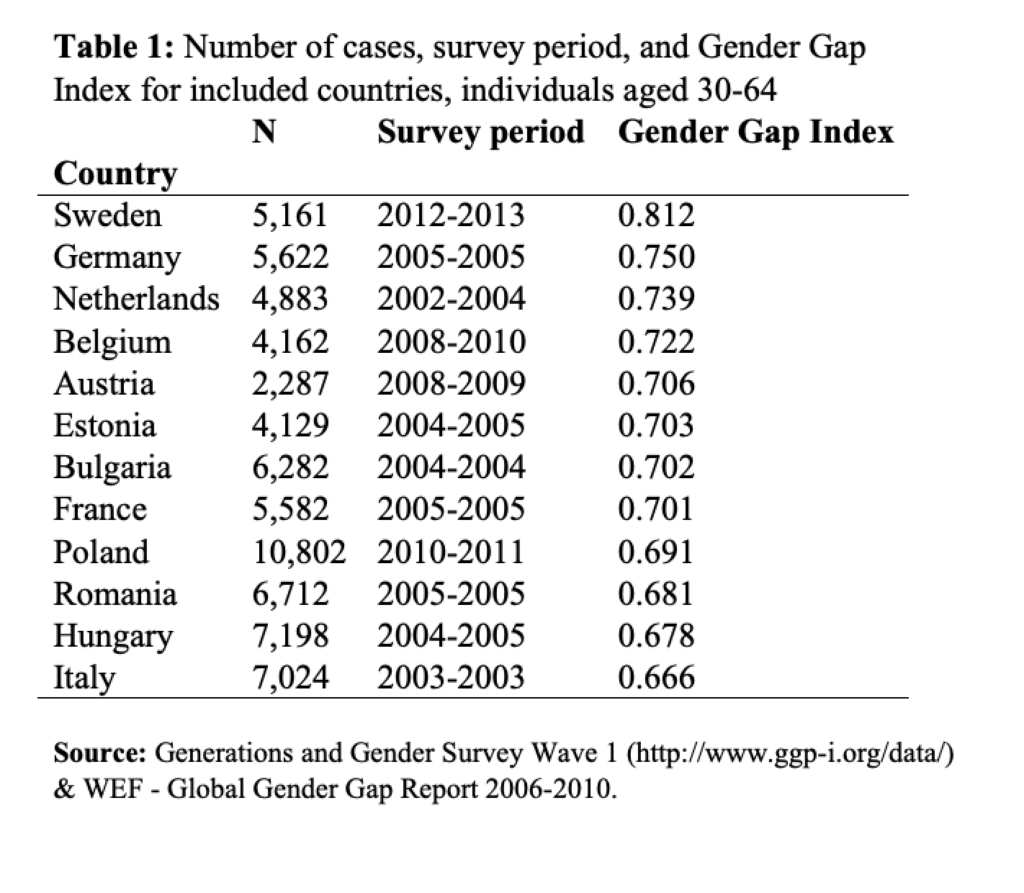 Individuals with high levels of education formed the vanguard in the shift towards more individualistic norms and behaviors in western countries during the social upheavals of the 1960s. In those years, the changing roles of women started to erode the patriarchal family, which later led to decreased family cohesion, higher rates of divorce/separation, postponement of family formation and an increased share of the population living alone (Esping-Andersen 2016; Lesthaeghe 1995; Van De Kaa 1987). However, recent research shows that the negative association between women’s education and family formation/cohesion has weakened, and that it is tending to turn positive in countries where institutions and men’s behavior in the family sphere have adapted to women’s new role (Esping-Andersen and Billari 2015; Goldscheider et al. 2015). This suggests that there may be a trend towards lower levels of living alone among highly educated adults in more gender-equal societies.

Who lives alone, and where?

Figure 1 reveals the proportion of men and women living alone in each country, with red indicating a relative excess of men and green a relative excess of women. The countries are ordered by their Global Gender Gap Index, from the most gender-equal (Sweden, on the left), to the least (Italy, on the right). The Index value is shown above each bar. In both eastern and southern Europe, the share of one-person households is considerably lower than in the more gender-equal northern European countries. In all the countries with high gender equality scores, living alone is more frequent among men. In the countries with relatively lower scores, the results by gender are more mixed, with higher levels observed among women in a number of eastern European countries such as Hungary, Romania and Estonia. Controlling for compositional differences between countries in terms of age structure, parental status and education reinforces the pattern: women tend to live alone more than men in less gender-equal countries, which also include Poland and Italy (not shown here: see Sandström and Karlsson 2019). 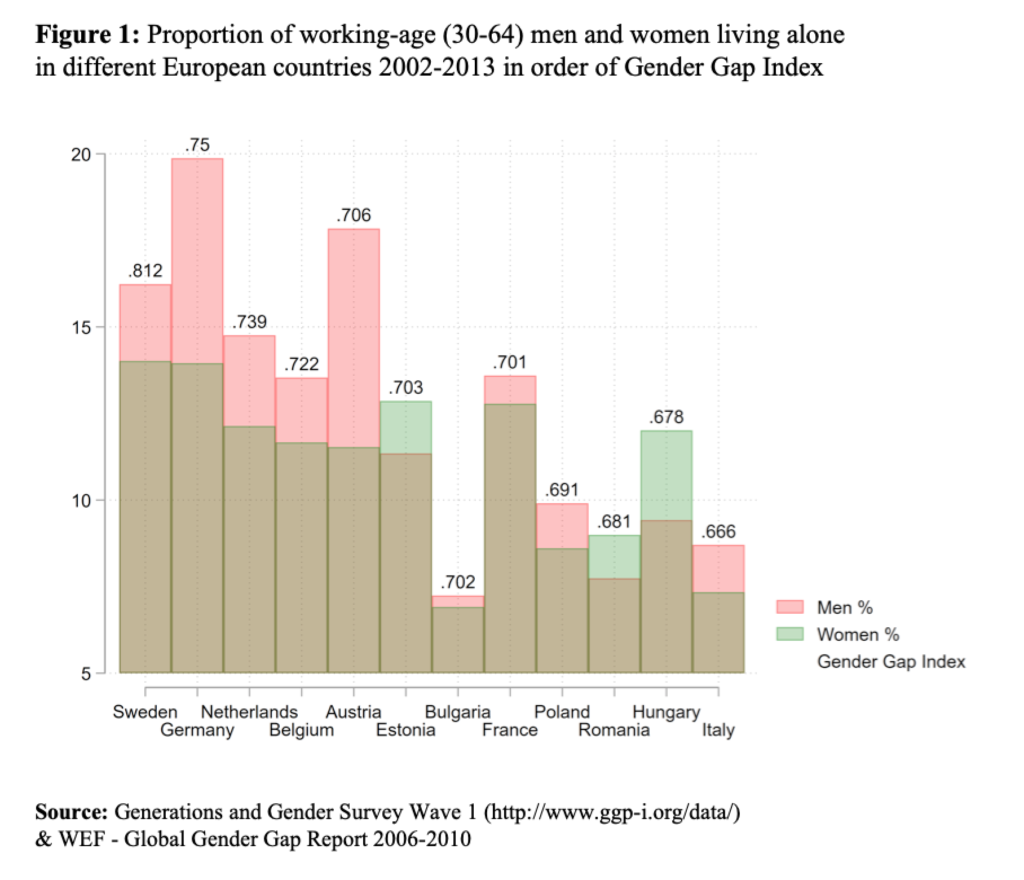 Figure 2 displays the predicted probabilities of living alone in working ages (30 to 64 years) by educational level, adjusting for age, gender and parental status. The countries are ordered as before, from the most gender-equal (Sweden) to the least (Italy). 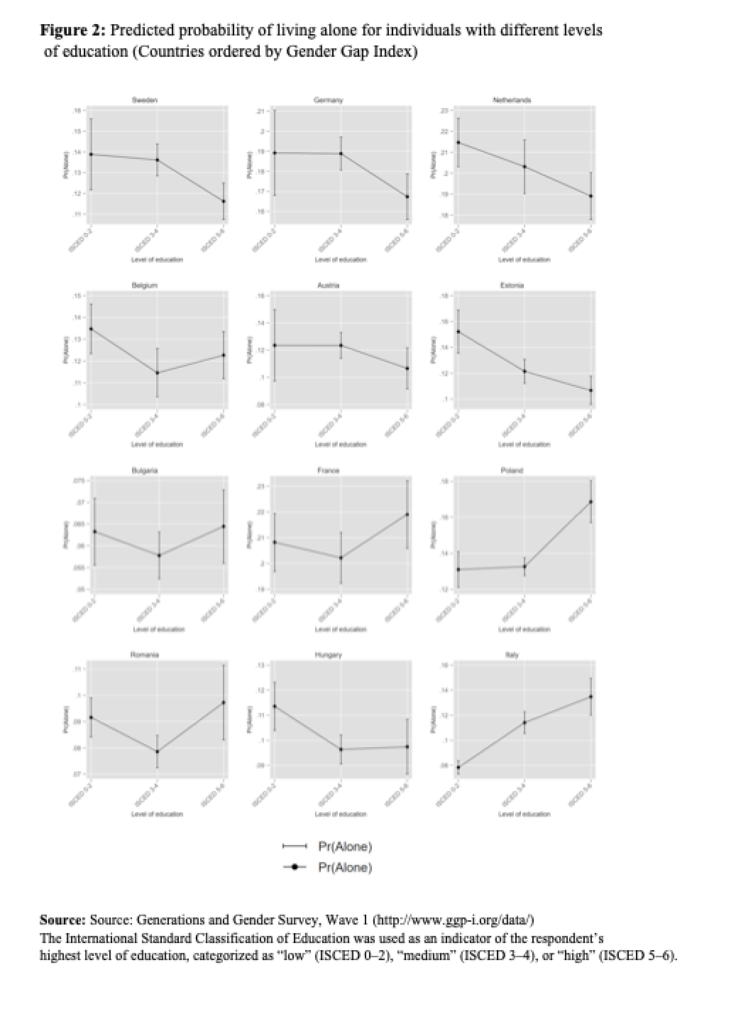 Let us focus on the gradient, i.e. on the tendency towards higher or lower probabilities of living alone as education increases (left to right within each panel). In the countries that score high on the Global Gender Gap Index, such as Sweden, the Netherlands and Estonia, the highly educated are least likely to live alone, and likewise, although the pattern is less clear, in Germany, Belgium and Austria. On the contrary, a positive relationship with education is generally found in the less gender-equal countries, especially in Italy and Poland, despite a few exceptions (notably Hungary).

There is a general expectation that more people will live alone in the future, especially in countries where the trend towards an increasing share of one-person households started only recently.

Those who live alone during midlife are also likely to live alone in their old age, and this makes them more vulnerable to adverse health outcomes and economic hardship. The higher probability of living alone for the least educated in more gender-equal societies is therefore of special interest to social policy, as differences in living arrangements are liable to exacerbate existing economic and health-related inequalities by socio-economic status. For countries in northern Europe, higher shares of one-person households in the low educated segments of their populations might result in increased need for social policies that offer more support to older adults living alone when these cohorts enter retirement ages.

The original study by Sandström and Karlsson mentioned in this article was conducted as part of the research program “Ageing well – individuals, families and households under changing demographic regimes in Sweden” (DNR: 2016-07115) funded by the Swedish Research Council for Health, Working Life and Welfare (FORTE).