Parenthood typically improves people’s life satisfaction, even if only in the short run. Surprisingly, instead, Malgorzata Mikucka finds that a second birth has a negative, albeit temporary, effect on Swiss mothers’ life satisfaction. This may depend on the social pressure to have children, coupled with policies that do not support parenthood.

In a recent paper (Mikucka and Rizzi, 2019) we analyse how parenthood affects life satisfaction in Switzerland. We use data of the Swiss Household Panel for the years 2000-2016: this is a longitudinal study that records, among others, individual trajectories of life satisfaction. We analyse the life satisfaction of parents, i.e. people who were observed in the waves directly preceding or following a birth, and whose (first or second) child was aged 15 or younger. Although we were theoretically able to follow respondents for up to a maximum of 17 consecutive years, no respondent was observed over the whole period (see also note to Figure 1). 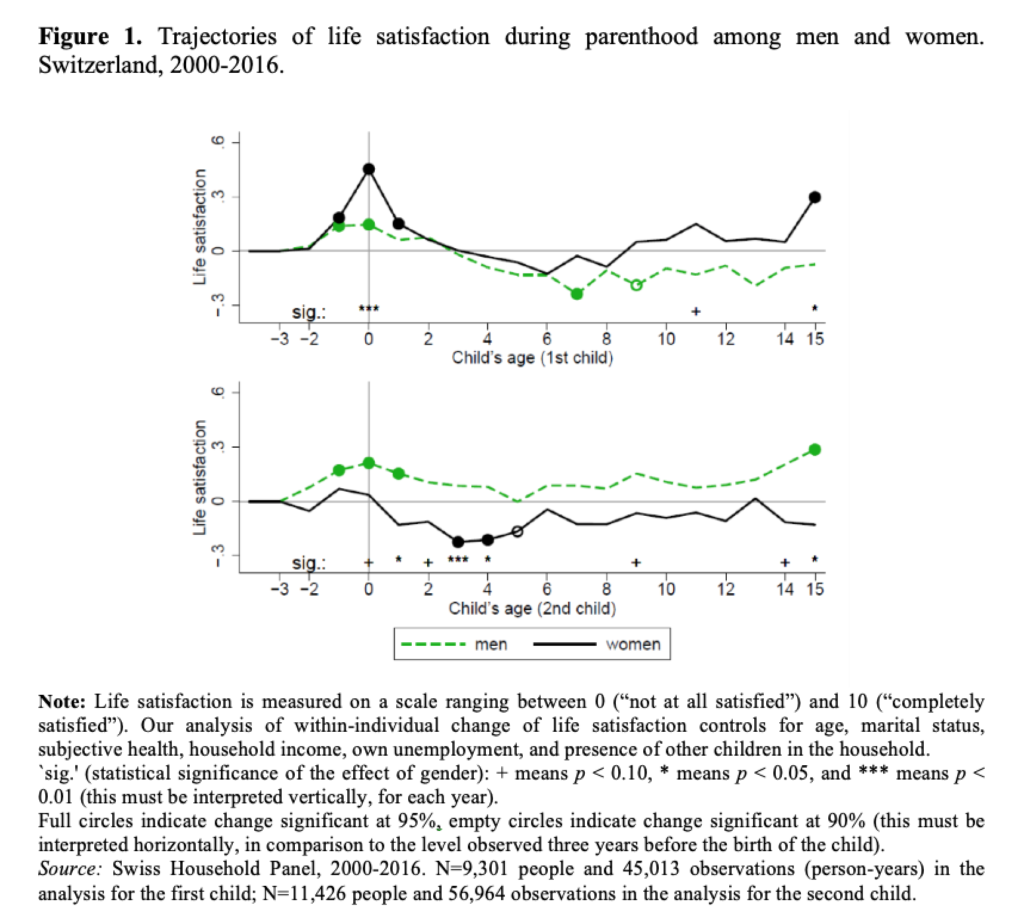 Two interesting patterns emerge. First, surprising as it may seem, fertility does not necessarily improve life satisfaction. In fact, it may even reduce it, albeit temporarily. Second, the decline in life satisfaction during parenthood seems specific to Switzerland and may be driven by the poor state support for families with children. Indeed, work-family conflict and economic costs of parenthood appear to play a prominent role on this outcome.

We know from past studies that parents’ (and especially mothers’) life satisfaction increases, albeit only temporarily, in the year preceding and following the birth of the first child (e.g. Myrskylä and Margolis, 2014). This is true also in Switzerland (2000 to 2016), according to our data, but not for the second child: when they are between 1 and 4 years old, the life satisfaction of their mothers declines to below the pre-birth level (Figure 1).

This pattern is unexpected for three reasons. First, similar analyses for other countries (e.g., Myrskylä and Margolis, 2014, for Germany and the UK) consistently show that parenthood improves life satisfaction, even if only temporarily. This suggests that the worsening of life satisfaction following parenthood may be specific to Switzerland.

Second, fertility control in Switzerland is virtually perfect, and couples are free to decide whether and when to have children. Childlessness in Switzerland is among the highest in the world (e.g., above 20% among women born in 1960) and it is socially accepted (Burkimsher and Zeman, 2017). Not surprisingly, people predominantly plan their parenthood: in our sample, for instance, 67% of first children and 81% of second children were planned. Thus, mothers consciously choose to have the child(ren) who will later reduce their life satisfaction.

The third reason why our result is surprising is that two-child families are the dominant family type in Switzerland, which suggests that a majority of families choose a path that, at least in the relatively short run, diminishes their life satisfaction.

Between-group differences do not help to solve the puzzle. For instance, we expected that people with a stronger `taste for children’ would have a second child sooner after the first one and also that they would derive more satisfaction from parenthood. Our results show the opposite. Women who had their second child shortly (one or two years) after the first one had experienced more negative trajectories of life satisfaction with the first child than women who waited longer before having a second child (Figure 2).

While it seems rational to expect that people who want a certain thing (a child, in this case) should be happier once they get it, our analysis suggested that this does not apply to having children in Switzerland. What are the possible explanations? One is that people are incapable of predicting how their fertility decisions will affect their life satisfaction and end up choosing what makes them unhappy. Another possibility is that, when taking important decisions in their lives, people account not only for their expected life satisfaction, but also for some other factors, among which social norms and values (e.g., children should have at least one sibling). In other words, people may willingly make choices that will make their lives harder. Besides, parenthood may be a source of meaning and psychological reward, but it may also conflict with other life goals, such as career or leisure. This brings us to the second interesting pattern in our results, namely the consequences of Swiss policies for parenthood.

When policies do not help: work-family conflict and the economic cost of parenthood

Switzerland is an interesting case for the study of parenthood and life satisfaction, because, despite its high standard of living, state support for families with children is low. Childcare in Switzerland is expensive, maternity leave is short, and parental leave does not exist at all (OECD, 2015). In families with small children to be cared for, the mothers predominantly resort to part-time employment. Expensive childcare and the reduced earning capability of mothers likely produce two types of outcomes: work-family conflict and economic pressures.

Our results indeed show that work-family conflict shapes the life satisfaction of mothers in Switzerland. The care-intensive stage of parenthood with the second child is especially challenging, and this is when mothers’ life satisfaction falls below its pre-birth level. Moreover, during the same care-intensive stage with a first child, life satisfaction among higher educated mothers declines more than among lower educated mothers (Figure 3), suggesting that combining parenthood with a career is particularly problematic. No similar pattern shows up for men, who seem to be less affected by time pressures and juggling work and family responsibilities.

Economic pressure should not be downplayed. The trajectories of life satisfaction among mothers of school-age children depend on their incomes: mothers with higher (above-median) household incomes experience more positive changes of life satisfaction than mothers with lower (below-median) household incomes (Figure 4). No similar pattern shows up for men. 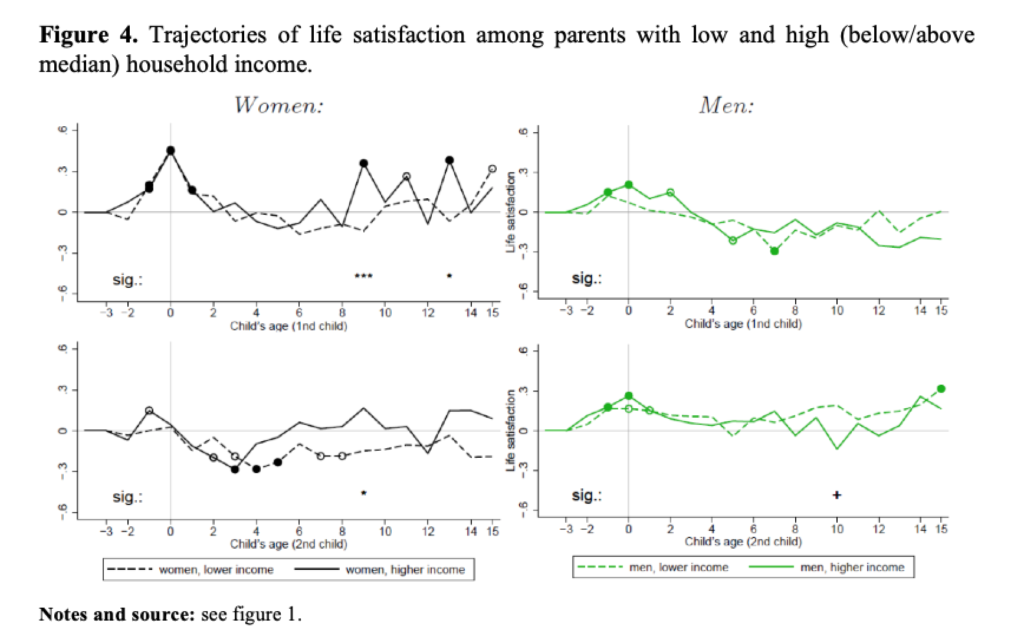 Overall, our results suggest that the low state support for families that characterizes the Swiss context worsens the experience of parenthood, especially for mothers. Public opinion seems to be aware of this: in a recent study, about half of the respondents stated that paid leave should be longer than the current four months, and about 80% agreed that part of the leave should be reserved for the father (Valarino et al. 2017). In the light of our analysis, such changes might plausibly improve the day-to-day experience of parenthood.