Loneliness is widely perceived as a problem of old age, as part of “normal” aging. Research shows, however, that only 5 to 15% of adults aged 60–80 report frequent feelings of loneliness (Dykstra 2009). Yet this literature is based primarily on data from Western countries with advanced welfare systems. Age-related increases in loneliness may be stronger and occur earlier in countries with poorer living conditions and welfare provision.

Available findings suggest large cross-country variations. A North-South divide has been shown, with far higher loneliness in the South (Fokkema et al. 2012). Little is known, however, about the risk of late-life loneliness in Eastern Europe, where the challenges in caring for the material, social, and health needs of the older populations are severe (EU & WHO 2002). These countries have limited health service provision, overall population health is relatively poor, and poverty rates are high. In a recent study we explored cross-country variation in late-life loneliness using data from the Generations and Gender Survey (Hansen & Slagsvold 2016). Analyses comprise 33,832 Europeans aged 60–80 from 11 countries, including several Eastern European countries.

Loneliness can be considered as the outcome of the subjective and negative evaluation of the gap between an individual’s desired and actual quantity and quality of social relationships (de Jong-Gierveld et al. 2006). A six-item short version of the de Jong-Gierveld Scale is used to measure loneliness, but we employ a different method of calculating loneliness scores than in prior work. We argue that the cutoff recommended by the scale developers is rather low and lumps together mild and more severe levels of loneliness (Hansen & Slagsvold 2016). We use a higher cutoff, so that “lonely” individuals report a quite serious level of loneliness.

The prevalence of male loneliness in the West is relatively low and stable (5-10%) across age groups (Figure 1). 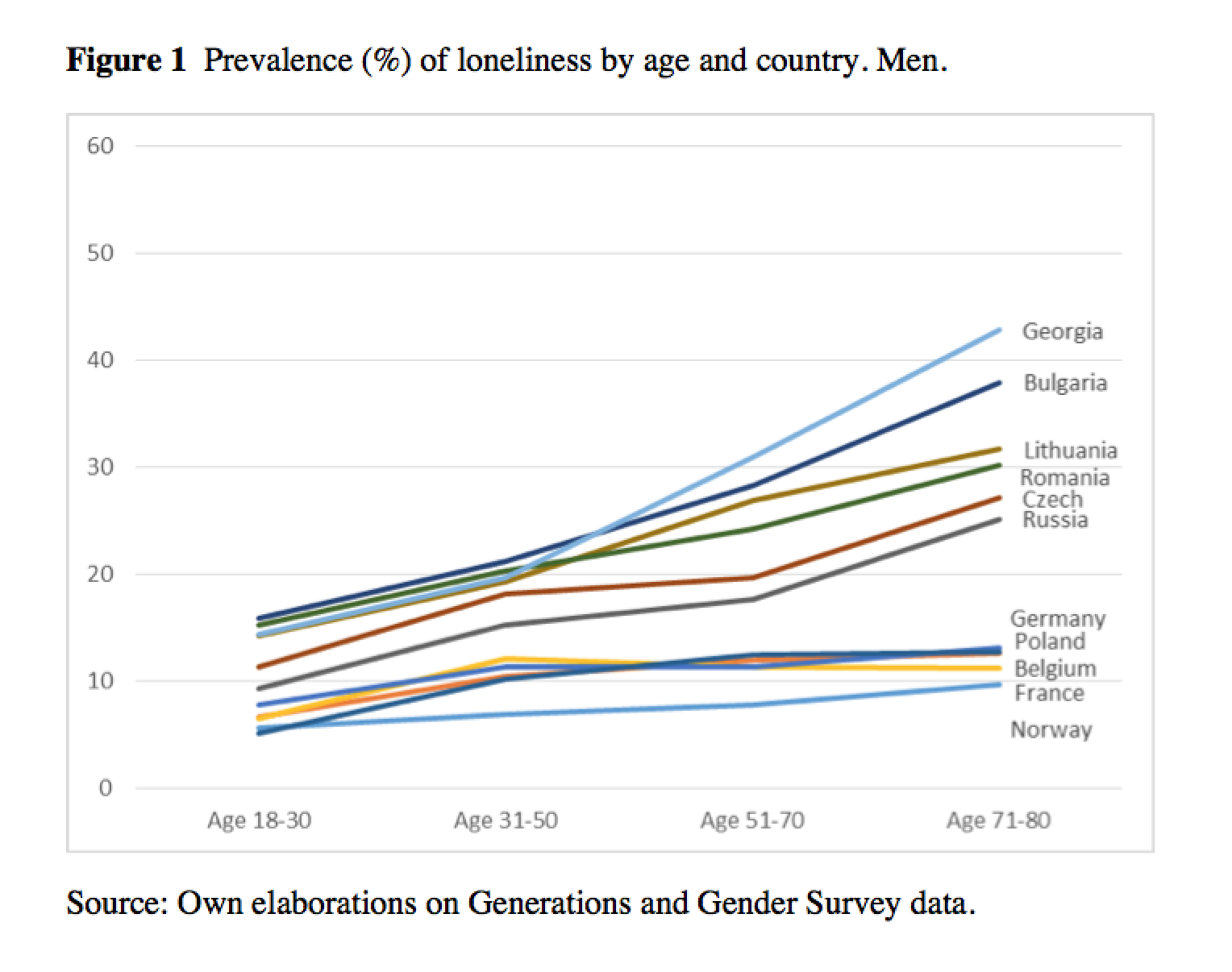 In the East, by contrast, rates increase from about 10-15% among the youngest to 25-40% among the oldest individuals. Contrasts are even more pronounced for women (Figure 2): rates are stable at 5-15% in the West, but in the East they increase from around 10–20% to 30-50% as age increases. 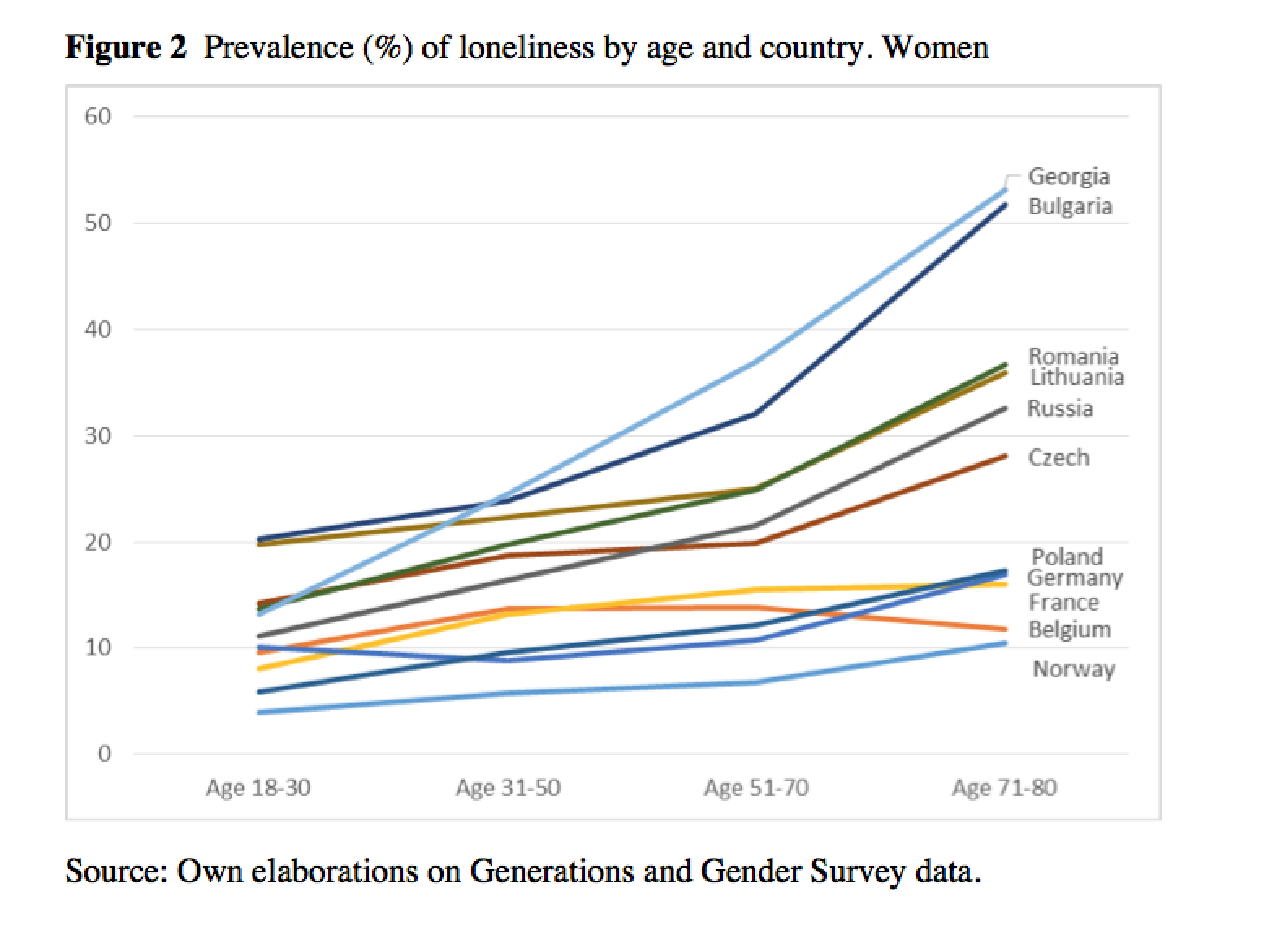 Gender differences are evident primarily in the East, with rates that are 5-15 percentage points higher for women than for men.
Why are Eastern seniors so vulnerable to loneliness? Part of the answer lies in their poorer socioeconomic status and health, and their more limited access to support. Similarly, the pronounced risk of loneliness faced by Eastern European women can be attributed to the fact that a relatively high number of them are aging without a partner (because of markedly lower life expectancy among men), and have health and financial problems. The social networks of older Eastern Europeans may also suffer the effects of decreasing fertility and increasing out-migration of younger adults (OECD 2012). Many older adults thus have no children or grandchildren nearby and when government provision falls short, they may lack resources to help them combat loneliness.

The role of the welfare state

It appears that in countries with generous social security schemes, where per capita public expenditure on health and welfare services is among the highest in Europe, people enjoy better social and psychological well-being than in countries where the state provides less. Generous welfare states may promote better conditions for social integration and self-reliance, and thus facilitate social participation, in particular among older adults with health limitations or low socioeconomic resources (Hvinden 2010). In many of the former socialist countries, formal support structures are largely absent (EU & WHO 2002). Hence, older people in Eastern Europe may be particularly prone to loneliness because of inequalities in health, social integration, and socioeconomic resources, which in turn may be driven by macro-level socioeconomic and welfare conditions.

The fact that wide cross-country heterogeneity in loneliness remains after controlling for all of the variables mentioned above suggests that a cultural perspective is needed in order to understand this variation. Loneliness occurs when the quality of one’s social relationships falls short of the expected or desired quality. People in the familistic and collectivistic Southern and Eastern European countries, because of high expectations of strong family and community ties, may have a lower threshold for experiencing loneliness than other Europeans. A low loneliness threshold may make matters worse for seniors in countries with high rates of widowhood, decreasing fertility rates, and increasing out-migration. Moreover, it may be that political upheavals, economic insecurity, and greater socioeconomic inequalities have eroded feelings of trust and social integration, thereby increasing the risk of loneliness among older adults in Eastern Europe (Rokach et al. 2001). In sum, the combination of a low loneliness threshold and negative changes in social integration may help to explain high levels of loneliness in Sothern and Eastern European countries.

Gerontologists have long since debunked the myth that loneliness is an inherent characteristic of old age. However, in some Eastern European countries, so far under-researched in the literature on loneliness, between a third and a half of the older population report feeling lonely, women especially. Conversely, loneliness is a comparatively rare experience in the West. Findings attest to and reflect the unequal conditions of aging across Europe and indicate serious deficits in late-life quality of life in some European countries.

The prevention and reduction of loneliness have ramifications beyond the social realm. Loneliness appears to hasten physiological decline and increase the use of health and care services (Hawkley & Cacioppo 2007), so alleviating loneliness is important for both individuals and societies. The combination of economic and social strain and an aging population poses a serious potential threat to the well-being of large numbers of older people, in Eastern European countries especially.

EU, WHO (2002). Health status overview for countries of central and eastern Europe that are candidates for accession to the European Union. Copenhagen: WHO.