The demographic transition, i.e., the passage from the ancient to the modern demographic regime of low fertility and low mortality, can be a highly heterogeneous process, and its impact on population growth can differ widely. In Europe and Northern America (EU&NA)¹, for instance, the demographic transition, which took place approximately from the early 19th to the end of the 20th century, caused the population to increase by a factor of less than five, which is very low compared to the growth now observed in most other regions of the world.

How national traits shaped regional variations in the demographic transition

In a recent study (Skirbekk et al. 2015), we contend that the main reason for this relatively low increase is a set of cultural traits which led to the adoption of the European marriage pattern (Hajnal 1965) characterized by late marriage, significant shares not marrying and low levels of extramarital fertility. This resulted in the comparatively low fertility that prevailed even before the onset of the demographic transition, and, perhaps most importantly, in a greater ability to reduce fertility at a later stage, when mortality started to decline.

Counterfactuals: what if the EU&NA trajectories had been adopted worldwide?

Table 1 and Figures 1 to 4 show how population size would have changed in these regions under two alternative scenarios. In the “EU&NA scenario”, all regions would have grown by a factor of 4.6 during the demographic transition between 1820 and 2010. In this case, Asia would have reached only 3.3 billion people, Africa 341 million, and Latin America 72 million. Under the “French scenario”, the global population would have merely doubled over the same period. All regions would now have significantly fewer inhabitants: Europe and North America would have increased to 474 million and Asia to 1.5 billion, while Africa would have grown to 150 million, which is just 15% of its current population. 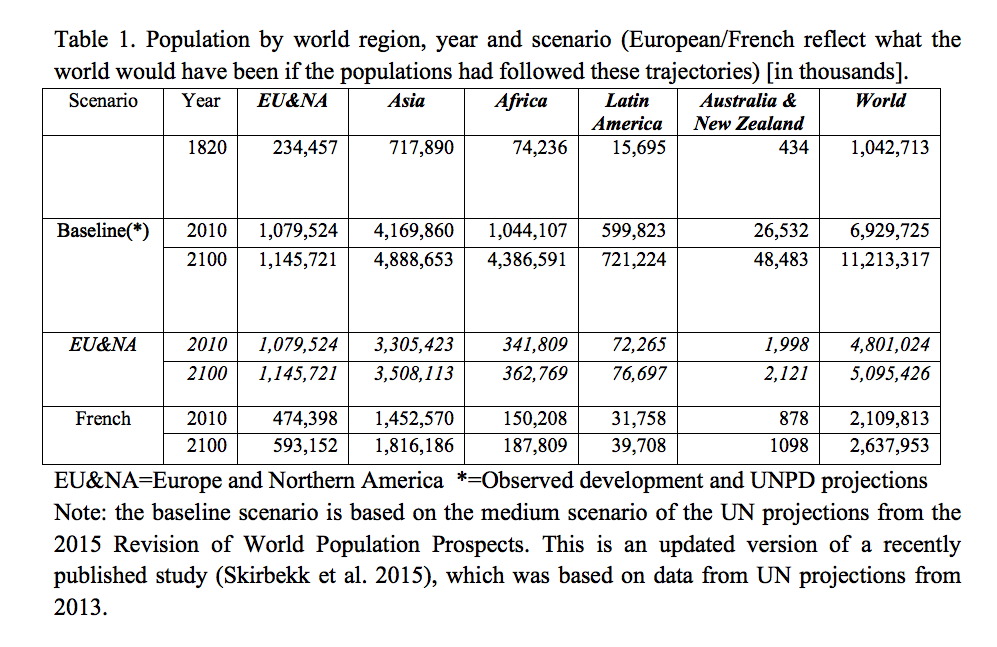 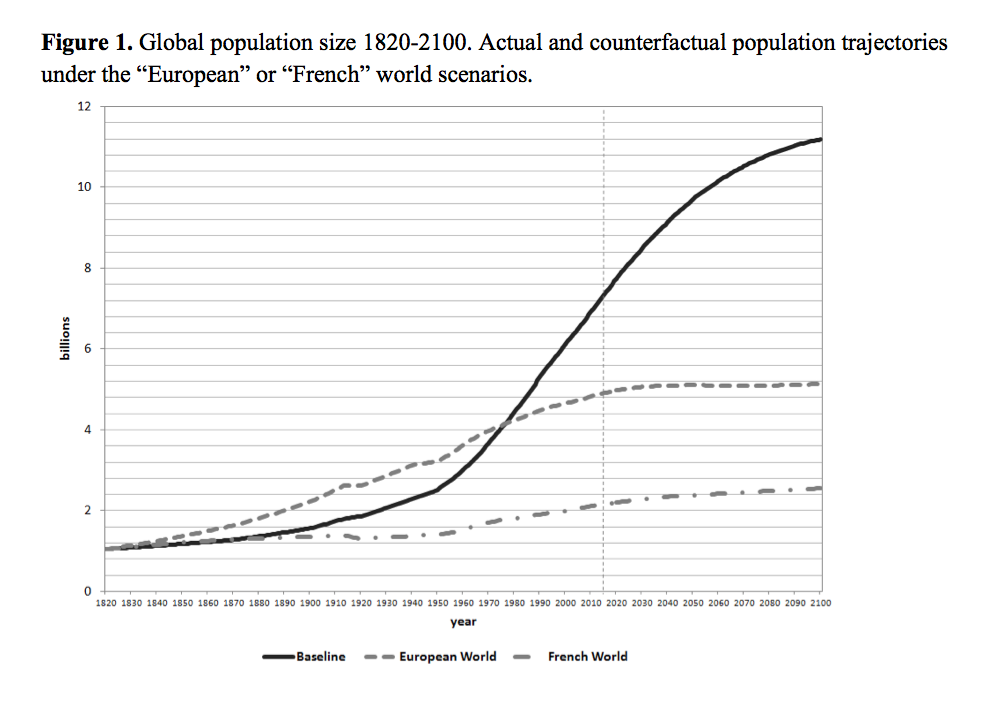 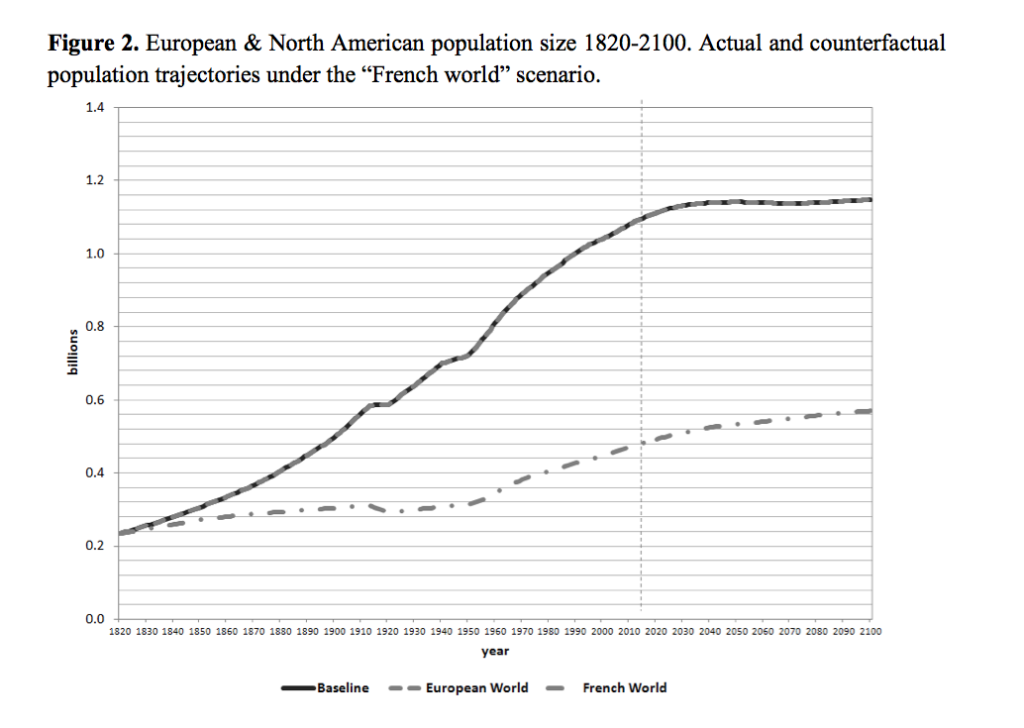 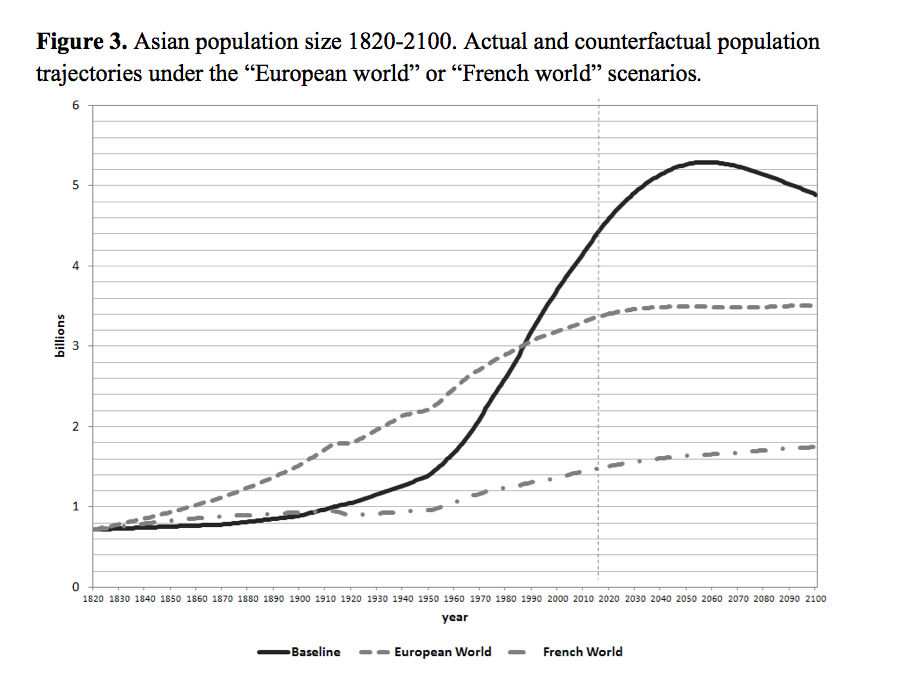 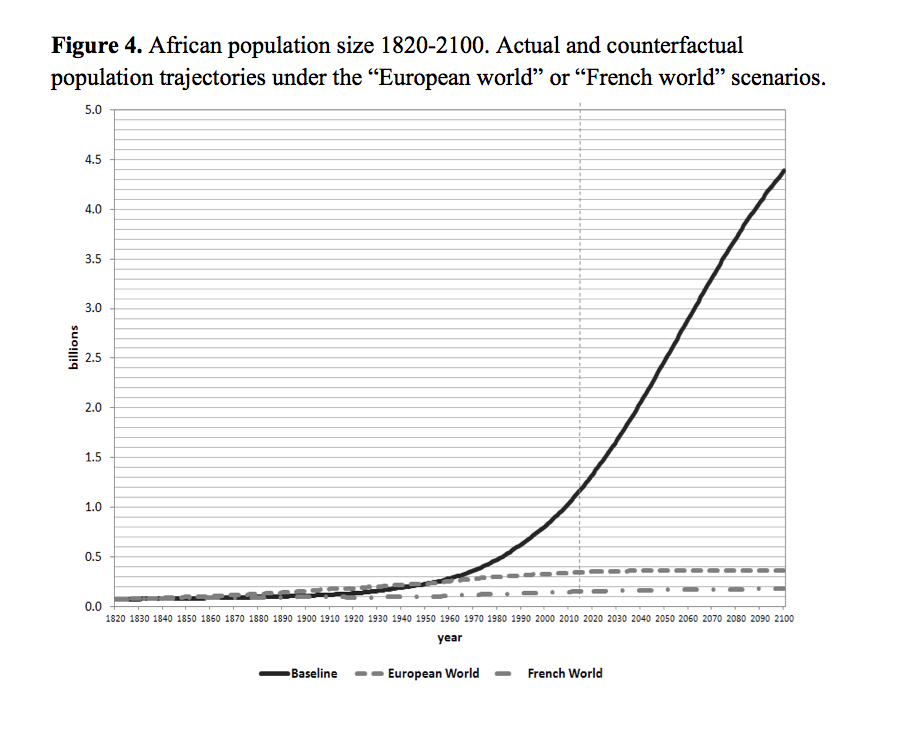 Had the rest of the world population experienced European growth rates, the consequences in terms of global and regional population growth (but also, very likely, socio-economic growth and environmental impact) would have been far-reaching. Take greenhouse emission levels, for instance: all other things being equal, in our “EU&NA scenario” (world population of 4.8 billion rather than 6.9 billion in 2010) total emissions would have been about 19% lower than was actually the case, and 65% lower in the “French scenario” (2.1 billion people).

A key assumption that we make is that many of the changes related to the timing of the demographic transition in Europe could also have taken place in other world regions at a similar time. This is not implausible. The sustained decline in family size towards replacement levels that took place in Europe could also have originated independently elsewhere, leading to similar population trajectories.

This is consistent with Goody’s (2006) opinion that differences in household structures across the wider Eurasian area have been overstated. Regarding education, it is true that education levels in European countries rose at a relatively early stage, and that the levels observed in the early 19th century in, say, Germany, England and France were still not matched in many countries across the world by turn of the 21st century. Yet education levels could, in principle, also have increased elsewhere at earlier points in time, e.g., the role of scholarship has long been emphasized in very different cultures around the world.

But what really made a difference to the European population growth patterns was the culturally-driven marriage pattern, which obliged considerable proportions of the population to refrain from sex and reproduction during much of their reproductive life. In northwestern Europe, for example, a large proportion of 15-24 year olds – ranging between 30 and 55% – were servants, and they postponed marriage until they were in an economic position to afford family formation, which contributed to late and low fertility.

In sum, as the study by Skirbekk et al. (2015) underlines in greater detail than we can explore here, the global and regional population growth effects of specific cultural characteristics can be very large, if these characteristics affect family formation, childbearing, and extramarital sex. Western cultural practices and responses could have, at least to some extent, been replicated elsewhere; if they had, the world would be a very different place today.

¹In a broad sense, Northern America can be considered an “overseas offshoot” of Europe, from which it was in large part populated. In this article, for the sake of simplicity, we will refer to this broad area as a unique region, which we will call EU&NA (Europe and Northern America).