Population ageing is inevitable, but its negative consequences on the future labour force of the European Union, up to 2060, could be greatly attenuated if women and immigrants were more present in the labour market  (reaching the same levels as men and natives, respectively), and if educational levels were raised (because labour force participation increases with education). Using microsimulation methods, Guillaume Marois, Patrick Sabourin, and Alain Bélanger show that under the optimal scenario, where all of these favourable developments are combined, the economic future of EU28 does not appear so gloomy, after all. Whether this potential will be realized, however, remains to be seen.

Following several decades of low fertility, the working-age population is or will soon be shrinking in many European countries, while the number of older adults will increase. Population ageing is unavoidable in Europe, but it need not affect, or only marginally, the size of its labour force: reducing differentials in labour force participation and educational attainment can have a very large impact, even greater than, for instance, immigration or population ageing.

In a recent paper (Marois, Sabourin, and Bélanger 2019a), we assessed the impact of different policy-oriented scenarios on the future labour force of the European Union Member States up to 2060. More precisely, in addition to a reference scenario assuming the simple continuation of past trends, we constructed four alternative scenarios with the following characteristics:

We constructed these alternative scenarios using CEPAM-Mic (Bélanger et al. 2019; Marois, Sabourin, and Bélanger 2019b, 2019c), a sophisticated microsimulation model developed for the Center of Expertise on Population and Migration (CEPAM)¹. CEPAM-Mic can be used to project the population of EU28 member countries while controlling for as many as 13 different socio-economic and ethno-cultural dimensions, and to create scenarios combining different hypotheses on the future evolution of the components of population change. All scenarios share the same basic assumptions for fertility, mortality, and domestic migration (see below). 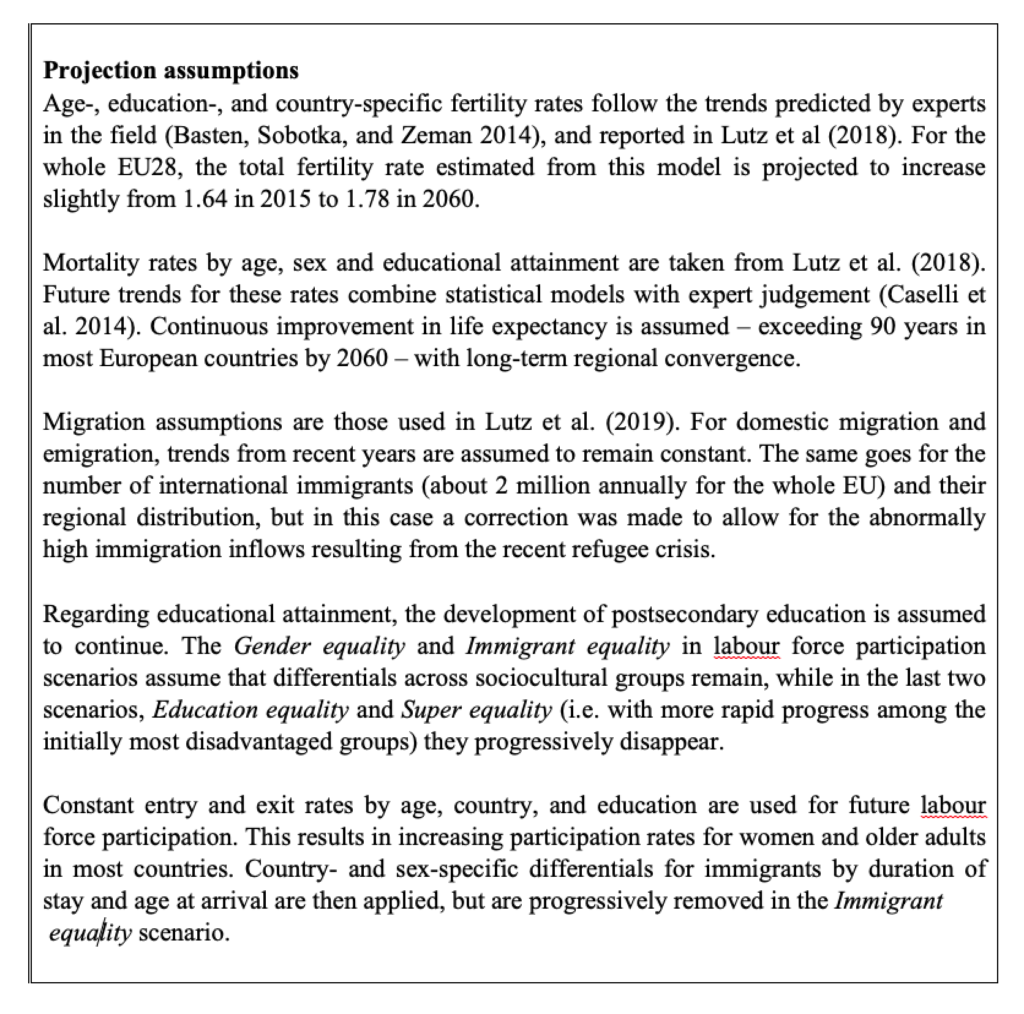 Under the reference scenario, the labour force of the European Union is expected to decline by about 19 million by 2060, as shown in Figure 1a, falling from about 244.6 million workers in 2015 to 225.6 million in 2060. As the inactive population will grow because of increasing life expectancy and the entry into retirement of the baby-boom generation, the labour force dependency ratio (LFDR) ‒ the ratio of the inactive (including children and older adults) to the active population ‒ is projected to increase from about 1.08 in 2015 to 1.33 in 2060 (figure 1b). This scenario is similar to other labour force projections (Loichinger 2015; European Commission and Economic Policy Committee 2017).

The gender equality scenario yields a large positive impact on both the labour force size and the labour force dependency ratio. If the participation rates of women gradually reached those of men by 2050, the expected decline in the labour force would be reduced by about 50% compared to the reference scenario.

Removing inequalities in labour force participation for immigrants also yields a sizeable effect. Compared to the reference scenario, the expected decline in the labour force by 2060 would be reduced by 29%, (about 231 million workers vs. 225.6 million). In addition to increasing the number of workers, turning inactive immigrants into active ones, as we do in this scenario, reduces the increase in the LFDR by 22%, to 1.27 in 2060 vs. 1.33 in the reference scenario.

Removing inequalities in education has a smaller impact on the labour force size: although an increase in education positively affects participation rates, future cohorts become smaller, because more educated women also tend to have fewer children. The positive impact of this scenario is more apparent on the labour force dependency ratio (LFDR), which would increase only to 1.28 vs 1.33 under the reference scenario. In addition, since education is highly correlated with productivity, the education equality scenario could markedly improve the general economic situation of the EU (not shown here). Indeed, this scenario yields a sharp increase of 61% in the number of highly educated workers, compared to only 24% in the reference scenario, thus significantly changing the educational profile of the future labour force.

The best that we can hope…

Finally, combining the positive assumptions of the three previous “what-ifs” (Super equality scenario) results in a labour force of about 236 million in 2060, which is only 4% lower than the current (2015) size. In 2060, the labour force would be similar in size to that of 2008. Although this scenario cannot prevent the expected increase in the LFDR, it would significantly reduce the pace of its growth, with a ratio of 1.16 in 2060, only 0.08 higher than that observed in 2015. Two-thirds of the impact of population ageing would thus be offset (compared to the reference scenario), in addition to preventing a significant labour force decline.

Although population ageing is an outcome largely driven by past demographic behaviours, this research shows that its broad consequences, in terms of labour force size and labour force dependency ratios are not set in stone.

Marois, Guillaume, Patrick Sabourin, and Alain Bélanger. 2019a. “How Reducing Differentials in Education and Labour Force Participation Could Lessen Workforce Decline in the EU-28.” Demographic Research 41 (6): 125–60.

¹The Centre of Expertise on Population and Migration (CEPAM) is a joint research project of the International Institute for Applied Systems Analysis (IIASA) and the Joint Research Centre (JRC) of the European Commission.