Studies on child health in developing countries often find that children are healthier in urban areas than in rural areas. There are many reasons for this disparity. People in urban areas tend to be richer and better educated. Further, more densely populated places are more likely to have easier access to health services that matter for child survival and development, such as trained doctors, maternal care, and medicines.

However, dense settlement is not always advantageous for child health. Recent research in economics, epidemiology, and public health suggests that open defecation—the practice of defecating outside without using a toilet or latrine—is an important cause of infant mortality and child stunting in developing countries today (Humphrey, 2009; Fink et al., 2011, Spears, 2013). Open defecation has strong negative health externalities: it spreads infectious diseases including diarrhea, polio, cholera, and parasites, and its consequences are worse where people live close together and are very likely to encounter their neighbors’ germs.

In recent research, we use Demographic and Health Surveys to assess the extent to which the associations between population density and child health outcomes, like infant mortality and child height, are moderated by exposure to local or community-level sanitation behavior (Hathi et al., 2017).

Sanitation and the urban health advantage

We use 172 Demographic and Health Surveys (DHS) collected between 1990 and 2012 in 68 developing countries to create a dataset that includes about 1 million births. Our outcome of interest is whether or not children in the DHS birth histories, born between one and five years before the survey, survive their first year of life. We look at average within-country differences between children born in urban and rural areas. Like others who have studied these differences, we find that urban children are more likely to survive infancy than rural children.

One of the reasons for this urban advantage is sanitation: children in urban areas are exposed to far less open defecation, on average, than rural children. We also find that the proportion of households in a region that defecate in the open interacts with the urban or rural character of the area to predict infant mortality. The average urban-rural gap is much greater in places where more households defecate in the open.

The relationship between child health and sanitation depends on population density

We move beyond dichotomous urban-rural distinctions to explore the extent to which the interaction of open defecation and population density (rather than urban/rural residence) predicts child health. We find that the association of open defecation with infant mortality and with child height is stronger in places where population density is greater. This result is robust to accounting for child-level characteristics such as household assets, birth order, gender, mother’s age, and household education. It is also robust to making within-country comparisons. 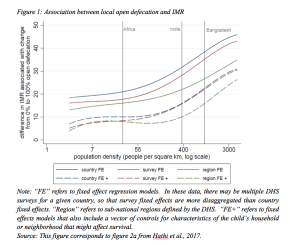 The blue curve, which controls for country fixed effects, suggests that where population density is as high as India’s, the infant mortality rate in places where everyone defecates in the open is 30 per 1000 higher, on average, than in places where no-one does so.

The six curves in figure 1, which represent six different ways of controlling for possible omitted factors, tell the same story: the association between infant mortality and open defecation is about twice as strong in densely populated places like Bangladesh and India as in places with lower population densities, such as sub-Saharan Africa. This means that the same amount of open defecation is twice as bad for infant survival in regions with high population density, like South Asia, as in those with low population density, like sub-Saharan Africa. 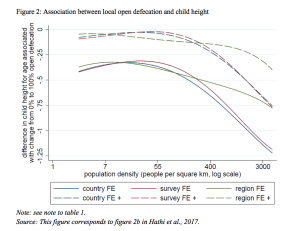 Figure 2 reports on a similar analysis of the height-for-age – open defecation gradient. As in figure 1, the association between open defecation and child height is more negative in places with higher population density. 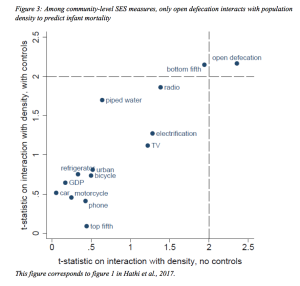 In figure 3 below, each dot represents a measure of how population density interacts with another variable to predict infant mortality. The dotted lines indicate the threshold for statistical significance. The figure shows that only local open defecation interacts robustly, and in a statistically significant manner, with population density to predict infant mortality, with and without controls. This specificity of the sanitation-density interaction provides strong evidence that our finding does not merely reflect spurious correlation.

Documenting and measuring the magnitude of the interaction between open defecation and population density using recent data on developing countries is important for several reasons. First, this approach moves beyond dichotomous rural and urban distinctions and clarifies the circumstances in which population density is positively associated with health, and those in which poor sanitation is particularly harmful.

Second, it contributes to understanding the importance of externalities or “spillover effects” of poor sanitation: one household’s toilet use or open defecation has consequences for neighboring households’ children. Such externalities are recognized in public economics as a central rationale for policy action.

Finally, these results invite us to take a closer look at where in the world poor sanitation is most harmful for children’s health. More than 1 billion people still defecate in the open (WHO and UNICEF 2012), but the health burden of open defecation is increasingly concentrated in rural parts of South Asia. The practice is particularly widespread in rural India (Coffey et al 2014); the 2011 Indian Census found that 90% of households without a toilet or latrine live in rural areas. If sanitation policy makers want to focus resources on places where open defecation has the strongest adverse health consequences for children, they would do well to concentrate on promoting latrine use among rural Indian populations.