The Democratic Republic of the Congo (DRC) is the third most populous country in sub-Saharan Africa, and one of the countries with the highest fertility in the world, at 6.6 children per woman in the country’s most recent Demographic and Health Survey (MPSMRM et al 2014). It is also one of the very few countries in the world whose fertility today exceeds that of the early 1950s.

Fertility and fertility differences in the 1950s

A nationwide survey carried out in 1955-57 showed substantial provincial differences in fertility. Over all, the Total fertility rate (TFR) was estimated at 5.9. As shown in Map 1, three of the six provinces had TFRs in excess of six children per woman, typical of non-contracepting populations. 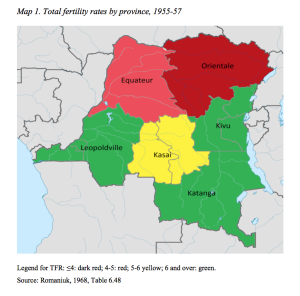 However, the two northernmost provinces, Equateur and Orientale, had relatively low fertility and high proportions of childless women. This was probably due to the sexual permissiveness of some ethnic groups residing in the north that was thought to promote the diffusion of sexually transmitted infections (STIs), which in turn led to high levels of sterility and childlessness (Romaniuk, 1961, 1967).

In addition, and surprisingly, in the mid-1950s fertility was higher in urban places (and especially in the capital, Leopoldville, now Kinshasa, and in Elisabethville, now Lubumbashi) than in rural places. At that time, the vast majority of women of reproductive age had never been to school, so women’s education was not a factor pertinent to fertility.

Over the succeeding decades, however, particularly following independence in 1960, women increasingly went to, and advanced in, school, especially in Kinshasa, and to a lesser degree, in smaller urban places. Women’s increased educational attainment was associated with lower fertility in Kinshasa, particularly for those who had at least reached the secondary level (Shapiro and Tambashe, 2003; Shapiro, 2015). This is evident as well in data from the recent Demographic and Health Surveys (2007, 2013-14). Over the same years, fertility differences by ethnic group have diminished in the city (Shapiro and Tambashe, 2003).

Fertility and fertility differences at present

Fertility levels from the 2013-14 DHS by province for the 11 provinces that existed at the time of the survey are shown in Map 2. 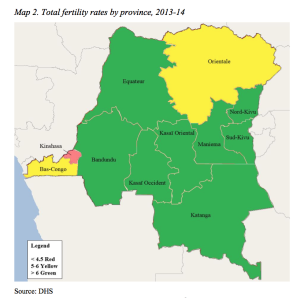 In eight of the provinces the TFR still exceeds 6, in two others it is between 5 and 6, and only in Kinshasa does it fall below 5. As suggested by the map and by additional statistical analyses, ethnicity has become less important over time as a source of fertility differentials (Shapiro and Tambashe, 2017). The narrowing of fertility differences by ethnic group as well as increased fertility after the 1950s were both attributed to successful public health campaigns against STIs in affected regions (Sala-Diakanda, 1980)

By contrast, the growth of women’s schooling throughout the country has seen the emergence of substantial fertility differentials by educational attainment. These differences vary both by years of schooling and by place of residence (Figure 1).

With respect to place of residence, TFRs tend to decline as years of schooling increase, regardless of location. At the same time, for any given level of school attainment, fertility (TFR) is highest in the rural areas, lowest in Kinshasa, and intermediate in smaller urban places.

The sensitivity of fertility to education is greatest in Kinshasa and smallest in rural areas. In other urban places, significantly lower fertility emerges only among women with at least upper-level secondary education. The phenomenon of especially low fertility in the capital, given schooling, is not unique to Kinshasa and the Congo; it is apparent in analysis of fertility in 30 countries in the region (Gebreselassie and Shapiro, 2017).

Among the different education groups, the decline in fertility as years of schooling increase reflects a declining ideal number of children, a lower likelihood of being in union, greater propensity to be an urban resident, and greater use of modern contraception.

Our examination of fertility in the Democratic Republic of the Congo going back about 60 years found that ethnicity, which formerly was associated with substantial differences in fertility, has receded in importance, while women’s education, particularly at the secondary level and beyond, has emerged as an important factor influencing fertility. More specifically, in Kinshasa, fertility differentials by ethnicity are almost non-existent, once one controls for schooling and age; elsewhere in the country such differentials are present, but they are considerably smaller than those by educational attainment. Hence, for the country as a whole, or more precisely, outside of Kinshasa, while ethnicity has not disappeared as a factor relevant to fertility, it has clearly been surpassed in importance by women’s education.

Gebreselassie, Tesfayi and David Shapiro. 2017. Education and Fertility in Sub-Saharan Africa: What Do We Really Know? Revised version of paper presented at the 2016 Annual Meeting of the Population Association of America, Washington, DC.