Age at first marriage has been rising throughout sub-Saharan Africa for more than twenty-five years. The median age at first marriage has increased by an average of 1-2 years across the region but substantial variation in age at first marriage remains (Garenne 2004). In some western and eastern African countries including Burkina Faso, Guinea, Malawi, Mali, and Niger, the median age at first marriage among women remains below 18 years (Koski, Clark, and Nandi 2017). In contrast, in several southern African countries where marriage has historically occurred relatively late, the median age at marriage has risen rapidly and is now over 25 years among women in Botswana, Namibia, and South Africa (Garenne 2004). Delaying marriage increases the amount of time that women spend at risk of premarital pregnancy, which has led some researchers to presume that premarital childbearing will become more common in the region (Gage-Brendon and Meekers 1993; Gage 1998; Harwood-Lejeune 2001; Singh, Sedgh, and Hussain 2010). Although marrying later increases the risk of premarital childbearing, simultaneous changes in young women’s reproductive behavior may offset the effects of this trend. Net changes in premarital fertility will also depend on country-specific trends in premarital sexual activity, contraceptive use, and abortion. In a recently published paper (Clark, Koski, and Smith-Greenaway 2017), we measured trends in premarital fertility over a 25-year period in 27 countries to examine the degree to which these opposing influences affect its prevalence.

Premarital childbearing is of interest for demographic, social, and public health reasons. In contexts where premarital sexual activity is strongly discouraged, a rising age at marriage could lower total fertility levels by delaying the age at which most women begin childbearing. In contrast, delays in marriage may have little effect on total fertility in settings where childbearing before marriage is widely accepted, as decreased fertility within marriage could be offset by an increase prior to marriage. Most premarital childbearing occurs during adolescence and has potential implications for girls’ health, educational attainment, and future labor force participation. Giving birth at a very young age increases the risk of obstetric complications, which are the leading cause of death among young girls in low and middle-income countries. Adolescent pregnancies may also hinder girls’ educational opportunities and derail their occupational ambitions, though it is unclear how many girls leave school due to pregnancy. Recent research also shows that women who have a child before marriage in sub-Saharan Africa spend a substantial amount of time as single parents, potentially leading to economic hardship with negative consequences for mothers and their children (Smith-Greenaway and Clark Forthcoming).

Levels and trends in premarital childbearing

We used data from Demographic and Health Surveys (DHS) to measure current levels and trends in premarital childbearing. Although the DHS are cross-sectional, they include respondents from a range of birth cohorts, which allowed us to measure change over a 25-year period spanning birth cohorts from 1960-64 to 1985-89. The surveys record the month and year in which a woman was first married and gave birth to her first child, which allowed us to determine whether births occurred before or after marriage. Using this information, we measured trends in premarital fertility before the age of 20, which we considered adolescent fertility, and before 25, which represents nearly all premarital fertility in the region as the vast majority of women have either given birth or married by this age.

As shown on the map of Figure 1, recent levels of premarital fertility vary markedly across the region from 3-4% in Niger and Ethiopia to 40-45% in Liberia and Gabon. 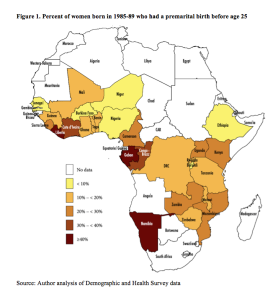 In Namibia, nearly 60% of women have had a premarital birth by the age of 25. Trends in premarital childbearing also differ dramatically across countries, as shown in Figure 2. 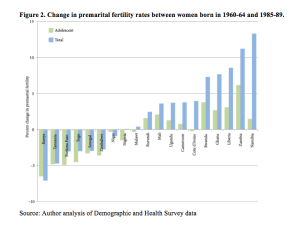 Delayed marriage, particularly among girls below the age of 18, is associated with numerous positive outcomes including lower levels of maternal morbidity, better child health outcomes, expanded opportunities for female education and employment, and overall lower levels of total fertility. However, it could also increase the risk of premarital childbearing by elongating the period of exposure before marriage. Our study investigates this potentially harmful outcome. We find evidence that in several countries premarital fertility has fallen despite a rising age of first marriage. Moreover, where premarital fertility has risen it is primarily concentrated among women above the age of 20. Hence, efforts to increase the age of first marriage, including promoting female education and strengthening child marriage laws, may yield significant benefits with minimal risks to the wellbeing of African women and societies.