Increasing attention is directed towards the ‘diverging destinies’ of children born in different family contexts. One might expect disparities to be small in Nordic welfare states, yet in Finland, as shown here by Marika Jalovaara and Gunnar Andersson, socioeconomic disparities in children’s experiences of family structures and transitions can be huge.

In a recent study (Jalovaara and Andersson 2018) we examined family forms and family transitions in Finland, from the perspective of children. We studied socio-economic differences in terms of both the type of family children are born into, and subsequent experiences of family events, such as parental separation and stepfamily formation. Our analyses are based on register data on the childbearing and union histories of women in Finland and on the family events that 64,162 children of these women experienced during their childhood (0–15 years) in 2003–2009. We present separate calculations for children of mothers with different levels of education. Our study shows that there are remarkable disparities in family forms and family transitions for different groups of children.

Family forms, at birth and later 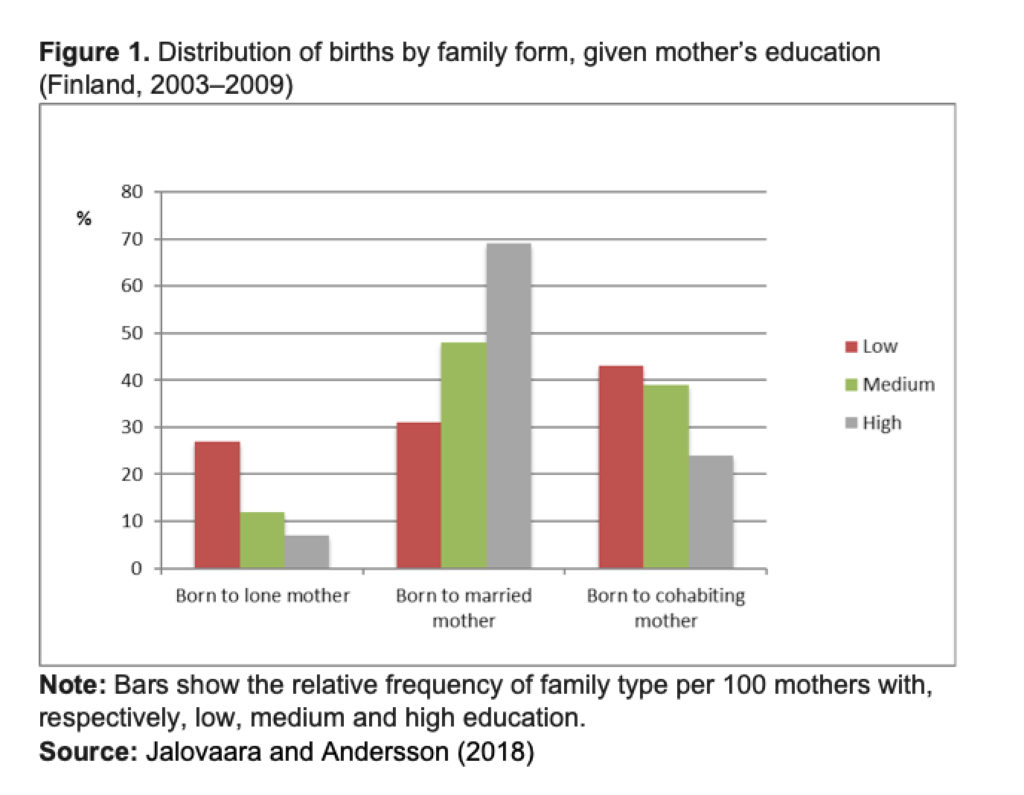 Children of low-educated mothers are also much more likely to experience further changes in their family structure as they grow up. This holds for parental separation in particular. Of all children born into a household with a mother and father, 41% see their parents separate before their fifteenth birthday. Family dissolution rates are lower for children born to two married parents. Among children born in marriage, one-third see their parents separate before turning fifteen, as compared to half of children born to cohabiting parents. However, the disparities in outcomes by mother’s education are much more striking than those related to the parents’ marital status. Differences in outcomes are particularly stark at the youngest child ages (Figure 2). Children of low-educated mothers are much more prone to experience parental separation, and separations occur faster and at younger ages than for children of mothers with more education. For instance, 43 percent of children with low-educated mothers experience parental separation by age six, and two-thirds by age fifteen. Among children of highly educated mothers, these proportions are 12 and 29 percent, respectively. 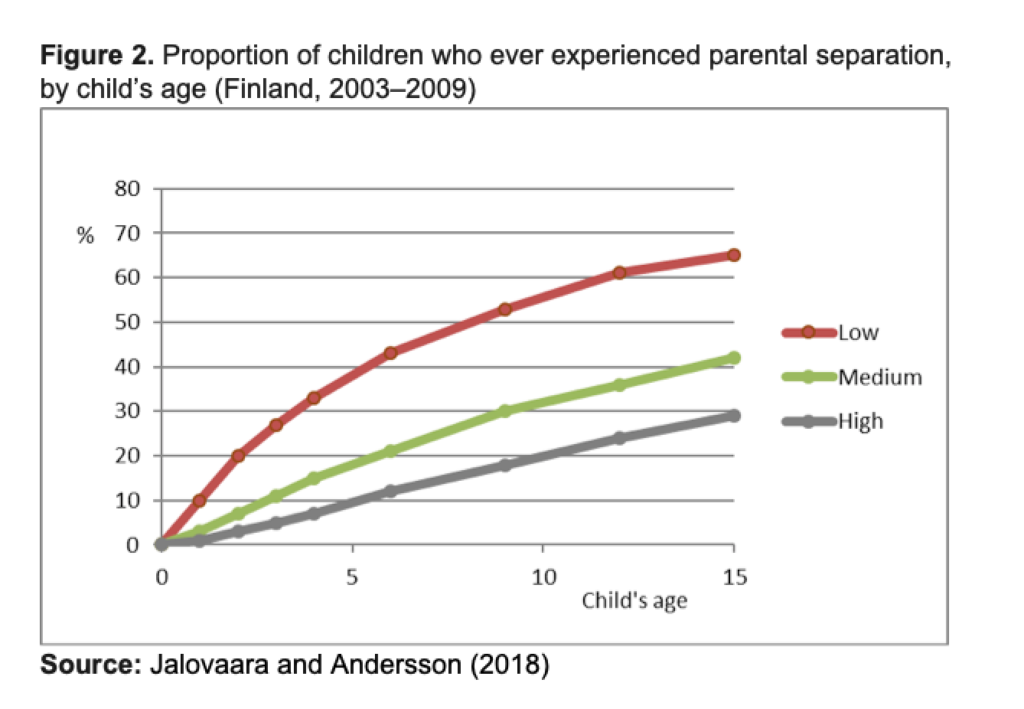 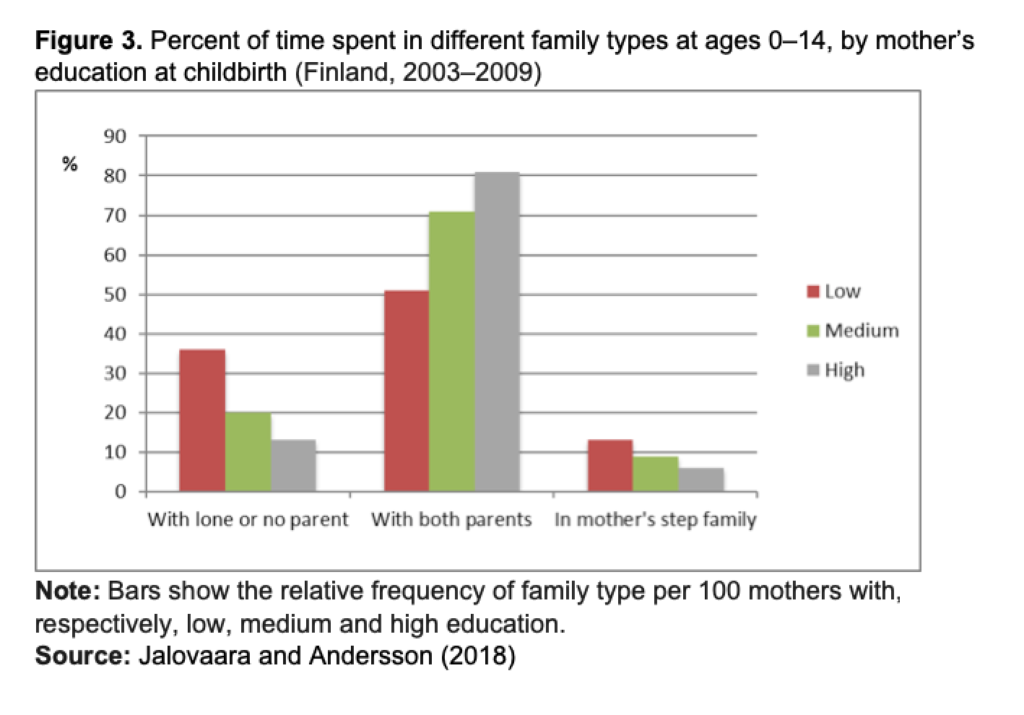 A well-known argument from the literature claims that socioeconomic differentials in children’s family forms have become increasingly important in shaping child outcomes and the resources that are available to children in developed societies (McLanahan 2004; McLanahan and Jacobsen 2015). Children of low-educated mothers are increasingly likely to experience family changes and situations associated with a loss of resources, including early parental family formation outside marriage, parental separation, lower levels of paternal involvement, and weaker parental labour market attachment. The opposite holds for children born to highly educated parents. These unevenly distributed family experiences of children born into disadvantaged and advantaged families have the potential to increase differences in children’s well-being and life chances, and thus to contribute to the accumulation of advantage or disadvantage across the life course and across generations.

Many agree that welfare states could and should reduce inequalities in children’s opportunities. McLanahan (2004; see also McLanahan and Jacobsen 2015) claims that income-tested benefits to single parents, widely used in the United States, discourage marriage and employment among low-educated women and thereby contribute to wider socioeconomic disparities. One may expect a weaker link between maternal education and childhood family structure in the Nordic welfare regime, where many policies are targeted at promoting social and gender equality, and social policies are guided by the principle of universalism. In our study, we show that this link is anything but weak in Finland, where large proportions of children grow up in families that are headed by a lone mother with low education and, in many cases, a precarious labour market position.

Based on the Gini index, the Nordic countries are still among the most economically equal nations in the world (World Bank 2019), and social policies support parents and children regardless of family type. Still, our study provides little evidence of Nordic equalities in terms of family demographic outcomes. Of course, modern welfare states cannot impose a predefined family demographic behaviour. But a realistic aim for policymakers could be to reduce any detrimental consequences of differential family dynamics on children and their life chances (Cohen 2015). Our findings highlight how critical it is to maintain the institutions and practices that help compensate for the losses of resources related to the family arrangement that children experience in their early years.