Immigration during childhood represents an important turning point for future developmental trajectories, and the timing of this event (i.e., age at arrival) has an impact on later-life educational success and economic opportunities (Hermansen, 2017).

About 15 percent of the world’s migrants are under the age of 20. That is almost 37 million people according to recent estimates by the United Nations. How to assimilate these young newcomers into the economic mainstream is an issue of key importance for policymakers as well as the broader public in many host societies.

This group has been labeled the “1.5 generation,” to differentiate them from their parents (the first-generation immigrants who were born and raised abroad) and from the second generation – people born and raised entirely in a country new to their parents (Rumbaut, 2004). Members of the 1.5 generation may find it difficult to adapt, especially if they arrive as adolescents with weak language skills. Researchers have shown that young children learn new languages more easily than adolescents or adults and that these new language skills enable them to learn more subjects in school and with greater ease (Newport, 2002). Early adjustment problems may shape the young migrants’ transition to adulthood and limit their life chances, sometimes permanently.

Thus, age at arrival is likely to be important because “in relation to individual attitudes and behavior, the critical distinction appears not to be the place of birth but the place where one grows up and, in particular, spends his or her adolescence” (Piore, 1979:65–66). As such, a focus on age at arrival offers a bridging perspective to understand the processes that shape variation in socioeconomic assimilation and how these gradients emerge across immigrant generations.

Assessing the relationship between age at arrival and adult socioeconomic attainments

In my study, I used data from administrative registries on all children of immigrants, in birth cohorts 1963–1982, who were either born in Norway or who immigrated to Norway up to the age of 18. For the latter group, the age at arrival can be determined, and linked with data on later outcomes, as adults.

To assess the impact of age at arrival on adult life chances, I considered completed years of education, employment, adult earnings, occupational attainment, and social welfare assistance. In the empirical analysis, I started by estimating the role of age at arrival in cross-sectional ordinary least squares (OLS) models while adjusting for observed family background characteristics (i.e., country of origin and parental education) and child-specific characteristics (i.e., child gender, birth order, and birth cohort). Next, I identified a subsample of siblings with the same mother and then related differences between siblings’ age at arrival to differences in their adult outcomes. These sibling comparisons were estimated using sibling fixed-effects (FE) models while also controlling for the observed child-specific characteristics.

These sibling comparisons are important because immigrant families arriving with children at different ages may differ on unobserved dimensions. For example, migrant parents concerned with their children’s well-being may choose to migrate when children are younger; others, such as refugees and asylum seekers, may have limited opportunities to take their children’s age into account when they decide, or are obliged, to migrate. Sibling comparisons offer a way to adjust for selective timing of childhood immigration and to better disentangle the causal effect of age at arrival on adult socioeconomic outcomes from all stable (observed as well as unobserved) family-level conditions and endowments shared by siblings. It should, however, be noted that the estimates obtained from the sibling comparisons may be biased by unobserved child characteristics and family characteristics that vary over time. For example, if younger children and their parents learn from the difficulties that their older siblings experienced in the transition to adulthood, this might bias the estimated age-at-arrival effects within families. 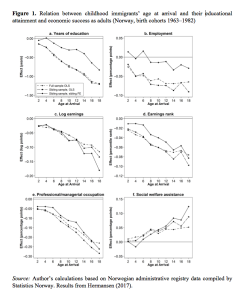 Figure 1 summarizes the estimated relationships between age at arrival and the adult socioeconomic outcomes. The estimates in each panel refer to the estimated difference in adult socioeconomic outcomes between immigrant-background children born in Norway (i.e., the reference group indicated by the horizontal solid bar at zero) and childhood immigrants by age at arrival for the full sample and the sibling subsample. I estimate the cross-sectional models for both samples (i.e., OLS), but the main focus is on the sibling comparison fixed-effects estimates in the sibling subsample (i.e., sibling FE). For all outcomes, each of the panels reveals a progressively stronger adverse influence of immigration at later stages of childhood.

On the whole, my study provides compelling evidence that childhood immigrants’ life chances become gradually more constrained as age at immigration increases. The key findings can easily be summarized. Age at arrival has a long-term effect on educational attainment and a broad range of employment-related domains in adulthood: the later the arrival, the higher the risk of poor outcomes later in life, at school and in the labour market. This finding is robust in sibling comparisons (i.e., ceteris paribus), which indicates that age at arrival has a causal effect on the socioeconomic assimilation of childhood immigrants.

However, there is also regional variation. While I found considerable age-at-arrival effects among children immigrating from low-income origin regions in Asia, the Middle East, Africa, and South America, I did not find similar patterns among childhood immigrants arriving from developed countries in Europe and North America. Moreover, age-at-arrival effects vary less by child’s gender and parental education.

These findings are consistent with perspectives stressing that child development progresses through sensitive periods, with early formative years providing a crucial basis for later skill formation and adult productivity. The developmental stages that childhood immigrants pass through are likely to be common to all children, but the various challenges they face while adjusting to a new host society may hinder them from realizing their full potential. From a policy perspective, this suggests that children who immigrate at later stages of childhood and especially during adolescence should be targeted—for example, through intensive language-training programs—to help ease their transition to adulthood and potential assimilation into the economic mainstream of their host societies.