Wolfgang Lutz, Jesus Crespo Cuaresma, and Nicholas Gailey show that the “demographic dividend” does not result from the opening of “a window of opportunity” caused by a declining youth dependency ratio; rather, it is initiated and significantly driven by improvements in education. This means that population ageing does not necessarily imply a closing of the window. Since changes in the educational composition of populations are also demographic changes, we can continue to speak of a demographic dividend.

The notion of a demographic dividend (conventionally defined as the potential economic benefits derived from having a small share of economically dependent individuals) stands as the dominant paradigm for conceptualizing and communicating why population matters for development. The United Nations Population Fund, for instance, has prominently adopted such an approach, focusing on reproductive health services to alleviate unmet need for family planning and moderate fertility (UNFPA 2016).

However, a new look at the demographic dividend (Lutz et al. 2019) shows that education improvement rather than a change in age structure is the gatekeeper for accessing economic growth. The econometric model that we used separates education from age-structure effects on development outcomes, finding that gains from a rising share of the working-age population are prevalent only when a relatively high share of the population is educated beyond primary schooling (Figure 1). 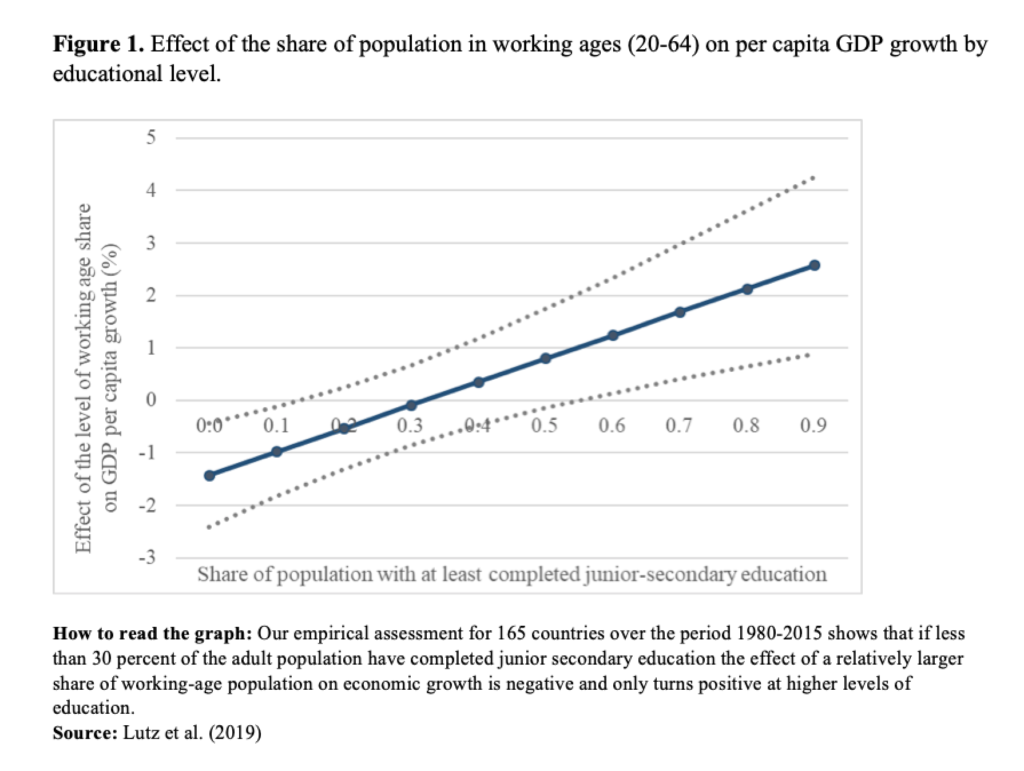 Age-structural change in itself does not open a specific window of opportunity: it can help strengthen the dividend, but only when combined with an improvement in human capital, which is the primary agent of change in low-income countries. Development goals, especially for early demographic transition countries, should therefore set education as a priority from the beginning, as the Sustainable Development Goals (SDGs) already postulate. Such a strategy also works in moderating fertility (Kebede et al 2019), which is a useful complement in the process of economic development.

What constitutes demographic change and its dividend?

While demographic change is sometimes narrowly viewed as only referring to changing age structure, both common usage and authoritative scientific definitions often take a broader view that includes changes in several demographic dimensions. For example, when the media write about the changing demographics of the USA in the context of voting behaviour, they refer to the changing proportions of Hispanics, changing proportions in urban, semi-urban and rural areas and changing education structures, among others. This broad usage is also in line with the definition used by the International Union for the Scientific Study of Population (IUSSP) and key textbooks (Shryock et al 1973) as the scientific study of changing population size and structures, meaning multiple structures. In this sense, both changes, in the education structure and in the age structure, can be labelled “demographic”, and both can influence the demographic dividend. Which of these demographic structural changes is more important for economic growth is a matter of empirical assessment rather than ex ante assumptions.

A counterfactual: what if Nigeria had followed a South Korean path?

The coefficients estimated in (Lutz et al. 2019) can be used to simulate alternative paths of per capita GDP. To do this, we will take Nigeria as an example. We can model the country’s evolution by “inserting” aspects of the South Korean experience, characterized by marked fertility decline, rapid progress in education and economic growth (Table 1). Of course, these simulations are not to be taken at face value: they are meant solely to disentangle the drivers of development and ultimately show that paired together, age structure and progress in education produce the best results.

Figure 2 presents the results of these simulations as log-deviations from the observed path of per capita GDP in Nigeria, between 1970 and 2015. Zero means “no difference”, whereas positive (or negative) values indicate that the economic development in Nigeria would have been better (or worse) than it actually was. 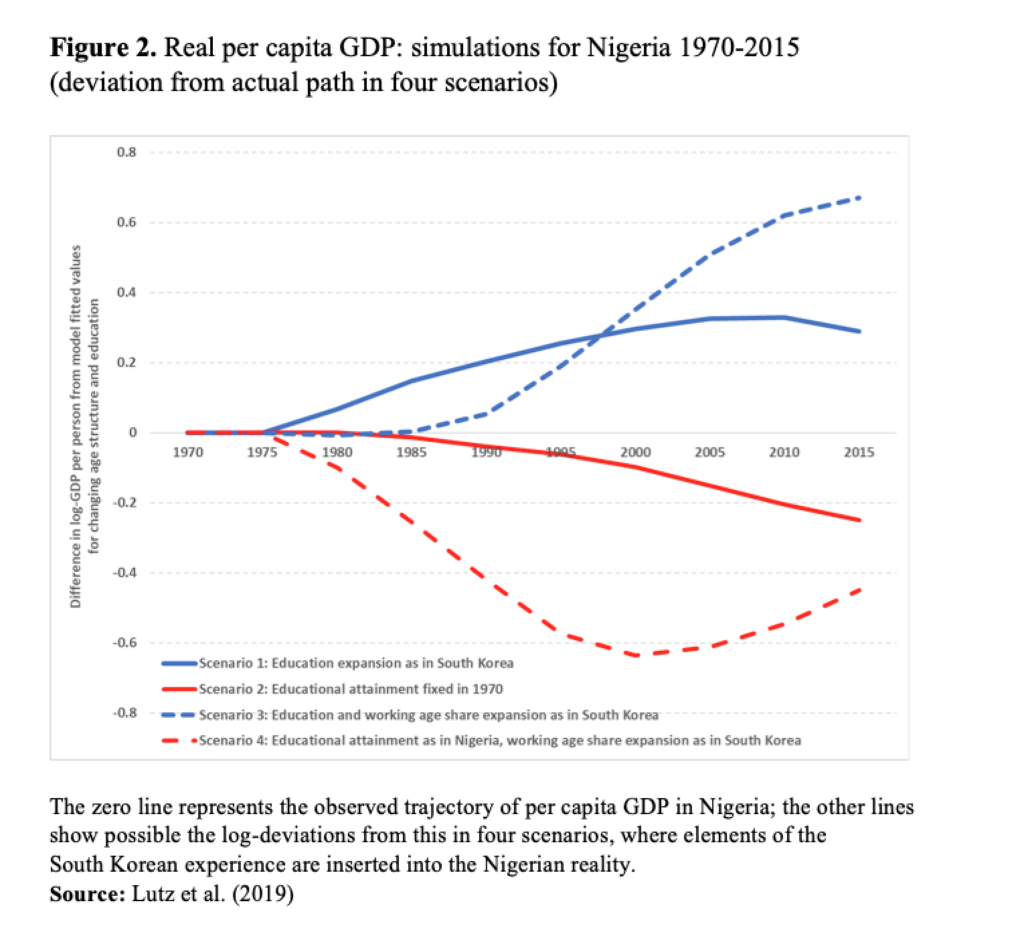 We consider four scenarios. Scenario 1 simulates what would have happened in Nigeria, had education improved as fast as it did in South Korea. Scenario 2, instead, freezes Nigeria’s education at its 1970 level, letting other variables change. Comparison between the two unbroken lines gives an idea of the economic impact of educational progress.

Under Scenario 3, the Korean education expansion is combined with the Korean age structure trend (traditional demographic “bonus”). Finally, Scenario 4 combines the actual education expansion of Nigeria with the very rapid increase in the working-age share of the population observed in Korea (an “education-free” demographic transition). The results of this scenario may appear surprising, but they are consistent with the parametric estimates shown in Figure 1. As the initial education level is very low in Nigeria (which is associated with negative parameters in Figure 1), a massive increase in the working-age share (same as in Korea) has a strong depressing effect on per capita GDP. Only after education increases beyond a critical point (which happens around 2000 in Nigeria) does the “traditional” demographic dividend turn positive.

This same interaction between age structure and education also explains the cross-over of the two blue curves. In Scenario 3, a strong (Korean style) education expansion, which has a positive effect in itself (see Scenario 1), is initially partly cancelled out by the rapid age-structure change, which is unfavourable to economic growth when education levels are very low (see again Figure 1). It is only later, when education levels increase sufficiently, that the two trends (age structure and education transition) positively reinforce each other and lead to an economic take-off.

The results underscore the importance of human capital accumulation for economic growth: a higher share of working-age population in itself is not enough, and it can even be detrimental when education levels are low. Admittedly, the causal path behind this remains unclear and is certainly worth investigating. A plausible conjecture is that young adults are not always employed productively, and this may lead to violence and conflict in the absence of the proper institutional settings (Cincotta 2011). Another explanation could be that recent strong declines in child mortality in some African countries, leading to relatively larger youth dependency ratios, have occurred in countries with strong economic growth, resulting in a positive association between youth dependency and GDP growth for least developed countries.

Of course, a counterfactual simulation that isolates age structure and education trends must be interpreted with caution, since in reality the two are not independent of each other: for instance, a strong fertility decline is unlikely to take place in the absence of education. But this study leaves no doubt as to the importance of education for economic growth. A full and rapid implementation of Sustainable Development Goals 4 (universal high-quality primary and secondary education) and 3 (health including reproductive health) is therefore a development priority. Otherwise, missed opportunities for the demographic dividend will persist.

Kebede E., Goujon A., Lutz W., Gailey N. (2019) Education disruptions in the 1980s contributed to the stalled fertility decline in Africa around 2000. N-IUSSP