Civil Registration and Vital Statistics (CR/VS) is an essential administrative system in modern societies. The registration of births and deaths defines a number of basic rights and duties, and is compulsory for the rule of law, legal identity, social security systems and many other aspects of social life. The publication and analysis of vital statistics is an important element of population management, planning and administration, and is necessary for monitoring trends in fertility and mortality, the main components of population dynamics [United Nations 2001].

The registration of births and deaths has a long history in Western Europe, going back to Parish Registers in the Middle-Ages and the Renaissance. With the development of modern states in the 18th and 19th centuries, the systematic recording of vital events was transferred to civil societies. For instance, in France, civil registration became universal at the time of the French Revolution, and by 1804 the system was considered as virtually complete. 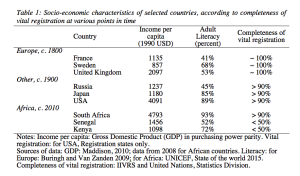 In England and Wales, civil registration was made compulsory in 1792, and was already virtually complete. In Sweden, civil registration became compulsory in 1686, and was virtually complete as early as 1749 [Koren 1918; United Nations 1955]. These systems were established in periods when income per capita was still low, and literacy not universal (Table 1). In most European countries, CR/VS systems were up-and-running by the late 19th century, and since then, long term time series of births and deaths have been available for analysis and research.

The European CR/VS system was copied in most countries around the world, in some cases with rapid success, in others with mixed results. In Russia, a first round of modernization occurred with the abolition of serfdom (1861), and with the development of a new decentralized system of government at local level, called Zemstvo, which included recording of births and deaths. The system was further developed after the 1917 Revolution, and by 1926 the civil registration system was considered near complete (> 90%). In Japan, a major effort of modernization was conducted after 1868 (the Meiji era), which led to the development of a CR/VS system, and by 1872 registration of births and deaths was considered near complete. In the USA, a civil registration system was developed in the East Coast as early as 1880, then state by state. By 1915, the system already covered 27 “registration states”, and by 1933 it was virtually complete throughout the union, with the exception of Alaska and Hawaii. In Latin America, similar systems were developed in the 19th century (as early as 1852 in Peru) and 20th century (as late as 1940 in Bolivia), with mixed results, some countries achieving high completeness early (Argentina, Chile), while others still lagged behind (Paraguay, Peru) [United Nations 1955; 2015].

Vital registration in Africa remains more problematic for a variety of reasons [Botha & Bradshaw 1985; Rao et al. 2000]. This deficiency has numerous consequences, and is a serious shortcoming for age-reporting, of older persons in particular [Coast & Randall, 2016]. First attempts were made during the pre-colonial period, as early as 1776 in Saint-Louis, Senegal. Major efforts were made to encourage vital registration during the colonial period, in particular in capital cities (Antananarivo, Brazzaville, Dakar, Nairobi, etc.), as well as in selected areas, such as South Africa for the White/European population. However, by 1960, at the time of independence, vital registration remained incomplete in most African countries, and very incomplete in rural areas [Cantrelle & Garenne 2015]. Many meetings were held, and many projects were conducted over the next 50 years to improve the situation, but with mixed results. According to the United Nations Statistics Division, completeness of birth registration across African countries now ranges from less than 10% (Somalia, Liberia, Ethiopia) to above 90% (Gabon, Congo, South Africa), and likewise, completeness of death registration ranges from less than 10% (Niger, Benin, Sudan) to above 90% (Sao-Tome & Principe, Cape Verde, Mauritius). [United Nations 2015] These variations illustrate the magnitude of what has been achieved in some countries, and what is missing in others.

A success story in rural Africa: the Agincourt DSS

With the dismantlement of Apartheid and the establishment of a new democratic state, the South African government made major efforts to develop civil registration and vital statistics after 1992. At that time, in remote rural areas, completeness of birth registration among the Black/African population was about 20% and that of death registration about 40%. Accurate data on completeness are missing nationwide, precisely because registration is incomplete, and also because demographic estimates from census and surveys are inaccurate. However, the 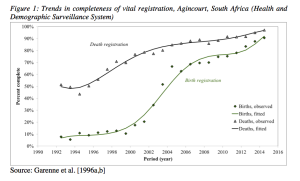 Agincourt Health and Demographic Surveillance System provides a robust measure of progress achieved between 1992 and 2014: registration increased from 8% to 91% for births, and 51% to 97% for deaths [Garenne et al. 1996a,b] (Figure 1). This example is not unique in South Africa, since the Agincourt area is part of the national system: it is only the precise monitoring and the estimation of completeness that is specific to this area.

The Agincourt case study shows that near completeness of birth and death registration can be achieved in less than a generation (< 30 years) when appropriate steps are taken. In the case of South Africa, the new CR/VS system is based on a strong political will, excellent organization and appropriate financing. The new system exploited all opportunities to promote registration, in particular through the collaboration of local clinics and hospitals where births and deaths occur, and the opportunities offered by new information technologies (internet, cell phone, mass storage). In addition, mobile teams helped to complete the job in remote places. Birth registration is also compulsory for ID cards, for voting (adults), for school registration (children), for social grants (adults and children) and many other activities. Death registration is compulsory for formal burial, and for entitlement to pensions and benefits [Van der Straaten 2015].

It should be noted that South Africa also benefits from an advanced education system and a wealthy economy. However, the experience of Western Europe, Russia, Japan, and the Americas reminds us that complete literacy and high income per capita are not indispensable for achieving complete vital registration. In Africa, a complete and well-functioning CR/VS system is possible in all countries, whatever the level of development, unless civil war makes it unable to function. It requires above all a strong political will, together with solid organization, adequate investments, and appropriate modern communications. There is no excuse for further delay in achieving complete birth and death registration, and the timely publication of vital statistics.

Koren J. (ed). (1918). The history of statistics – their development and progress in many countries. New York, MacMillan Co.