Co-residence between elderly parents and independent, married adult children is a common phenomenon in East Asian societies. For example, according to the 2005 China Inter-Census Survey data, two thirds of elderly people aged 65 and over live with their adult children (Zeng and Xie 2014). Similarly, high co-residence rates are also reported in Taiwan, Japan and South Korea. Multigenerational co-residence in East Asian societies is usually believed to be essentially a cultural tradition. However, in a recent publication (Ma and Wen, 2016) that uses China as an example, we show that co-residence is also a resource-sharing mechanism that responds to practical needs. Specifically, we find that, based on parents’ and children’s characteristics, the extended family will choose the most appropriate child from among siblings to live with elderly parents, such that all members of the family are economically better off.

Which child should live with their elderly parents?

We analyze this question conditional on the parents’ characteristics. When parents are still healthy and relatively young, they can help the child they co-reside with by doing housework (for example taking care of grandchildren). The child who is thus freed from housework can focus on his/her job and earn a higher income from the labor market. Which child among siblings benefits most from getting help with housework? The answer is: “relatively higher educated children”, because they get more expected income from the labor market. In other words, children with higher education have higher “opportunity costs” if they spend their time doing housework. On the other hand, when parents are unhealthy or old, they usually need their children’s help with housework. In this case, the child who lives with his/her parents will be burdened with more housework and thus earn less from the labor market. In short, it is less costly to have this type of parent co-reside with relatively lower educated children.

Of course, there is also the question of how this overall comparative advantage is redistributed among the potential beneficiaries (siblings), some of whom gain and some of whom lose from the chosen living arrangement. Or, in other words, will (adult) children accept such an arrangement? The answer is yes, if we allow children to transfer resources (money) to each other. So, when parents are healthy and young, higher educated children benefit more from living with their parents and, with an appropriate amount of money, they can compensate their less-educated siblings (who must do without the help of their parents) so that all participants are eventually better off. Similarly, when parents are old and in poor health, higher educated children lose more from living with them. Thus, higher educated children can make a similar transfer to compensate lower educated children for the effort they make in taking care of their unhealthy parents, and both children will be better off.

What do actual data tell us?

To test whether families do make their choices as rationally as we theoretically conjecture, we analyze data from the 2004 Mainland China sample from the Panel Study of Family Dynamics (PSFD). We focus on a sample of married adult children who have siblings¹ and retired (aged) parents (Number of children=4007; Number of families=971). All parents from the sample are living with at least one of their children.² We estimate an empirical model where the dependent variable is whether a specific child lives with his/her parents. The key independent variable is the education level of a child relative to that of his/her siblings. We estimate the marginal effect of relative education on the probability of co-residence and then show how this marginal effect is affected by the characteristics of the parents (age and health status). We also control for children’s gender, age, birth order and occupation.³ We find that our theoretical predictions are supported among families from rural areas (Number of children=3023; Number of families=714). 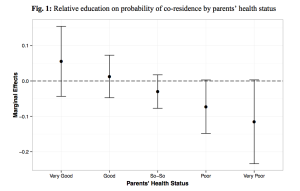 As shown in Figure 1, when the parents’ health status is “very good”, relative education has a positive effect on the probability of co-residence, indicating that parents are more likely to live with relatively higher educated children. As the parents’ health status deteriorates from “very good” to “very poor”, the effect of relative education on the probability of co-residence changes from positive to negative, indicating that when parents are unhealthy, they are more likely to live with relatively lower educated children. We find a similar pattern when we use age to measure the parents’ characteristics. 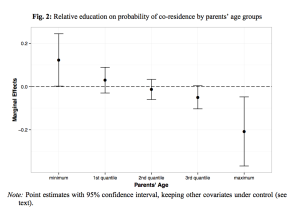 However, our predictions are not supported in the urban subsample (Number of children=984; Number of families=257). This result may be explained by easier access to a labor market from which domestic help can be more easily hired. It is also possible that in urban areas, children choose to live closer to their parents instead of fully co-residing with them; but with our dataset, the reasons for the rural-urban difference in this respect cannot really be investigated.

What do we learn from this exercise?

By studying the family decision on which adult child elderly parents live with in China, we show that a division of labor does exist when a family is facing resource constraints. Higher-educated children specialize in the labor market such that they get help from parents when parents can provide housework labor. Lower-educated children specialize in housework such that they help parents when parents need help in housework and physical care. Our results extend Becker’s classical economic theory of family. Becker (1981) explains the division of labor within nuclear families between husbands and wives. We extend this classical framework to extended families and find evidence to suggest a division of labor among siblings, too.

¹ The percentage of only-child families is very low in the original sample (7%), because most Chinese adults in a 2004 survey belong to the pre-one-child-policy generations.

³ Ideally we also want to control for the presence of grandchildren and characteristics of spouses of children. However, this information is not always available. See Ma and Wen (2016) for a discussion on this point.