After the great success of their most famous generalization, the demographic transition, demographers have been constantly looking for regularities. For a long time, strong convergence, or laggards catching up with forerunners, appeared to be a very convincing one: fertility and mortality in poor countries were (correctly) believed to be following the same pattern of change as previously observed in rich countries. What it is less clear, however, is what should happen after the end of the demographic transition, when fertility is close to or below replacement level, infectious diseases are mostly under control, and life expectancy at birth is high, at above 65-70 years.

Weak convergence, or a reduction of variability in a supposedly homogeneous group of countries, is clearly the prevailing hypothesis in many of the UN World Population Prospects Revisions, including that of 2017 (the one that we analyzed in Castiglioni, Dalla Zuanna and Tanturri, 2020), and the most recent one, that of 2019, not explicitly considered here. For example, the 2017 edition suggests that during the 21st century, all of the 112 countries around the world where the total fertility rate (TFR) was below 2.5 in 2010-15 will converge to a sort of quasi-stable population (Bourgeois-Pichat 1994) with declining mortality, constant fertility slightly below replacement (TFR close to 1.8), and a net migration rate approaching zero (±0.1 per 1,000). 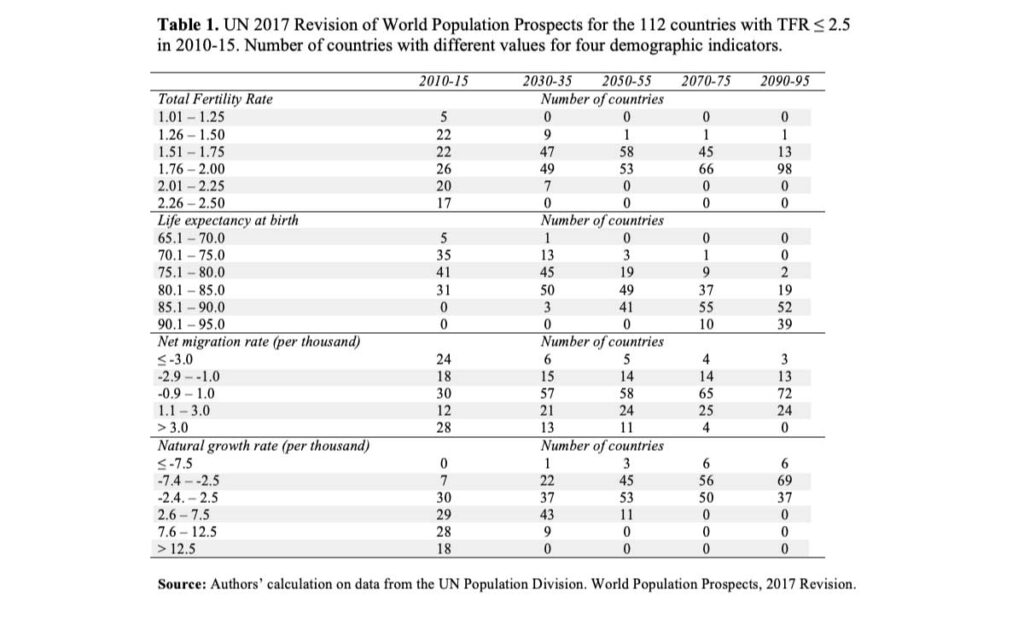 The lack of weak convergence: fertility

The UN Prospects Revisions of 1980 and 1990 suggested that the TFRs of countries having completed their fertility transition would quickly converge towards similar values, of around 1.8-1.9. Figure 1 shows that this did not happen. Instead, variability in fertility remained approximately constant between 1980 and 2015. In its 2000 release, the UN Population Division accurately predicted both average fertility trends and variability, i.e. a lack of convergence across the 38 countries. In 2017, however, (and likewise in 2019) they seem to have changed their minds (Table 1), but it is difficult to understand why fertility convergence should occur among post-transitional countries in the coming years and decades.

The lack of weak convergence: mortality

The lack of weak convergence: migration

Migration rates are by far the most difficult population parameters to forecast as they are more closely related to largely unpredictable external shocks, such as economic downturns. Neither the 1980 nor the 1990 World Population Prospects correctly predicted the level or the variability of the net migration rate (NMR) in the first 15 years of the new century (Figure 3). Likewise, the 2000-based forecasts were also unable to predict the immigration boom of the first decade of the new century and the further increase in cross-country differences.

The paradigm of the demographic transition has provided an exceptionally useful tool for describing a common path of demographic change across countries, and their strong convergence over time from a regime where mortality and fertility are high to a new regime where they are low. On the basis of this well-known pattern, forecasters projected that mortality and fertility trends would follow a common path as modernization and economic development spread across the world. However, we have shown that for countries that have already completed their demographic transition, the idea of a general weak convergence also seems to inform the hypotheses and/or the outcomes of population projections elaborated by the UN Population Division. This conjecture, however, does not seem to hold: there are no clear signs of a convergence in fertility, mortality or net migration for the 38 countries that had practically completed their demographic transition by 1985 (i.e. whose fertility was below 2.5 by that time).

While the 2000 Revision of World Population Prospects correctly did not predict convergence for mortality and fertility (although it did so for migration) in the period 2000-2015, it was reintroduced in later revisions. However, in light of our results, it is hard to believe that in the years 2020-2100 the 112 countries with a TFR below 2.5 children per woman in 2015 will converge towards similar demographic behaviours, as suggested by the 2017 and 2019 Revisions of World Population Prospects.

The problem is that in a post-modern (post-transition) world, the components of demographic change depend on a variety of causes, which can differ by country or groups of countries (for fertility, for instance, see Rindfuss and Choe 2015; 2016). For forecasters, this greatly complicates the search for the correct underlying assumptions, but a better understanding of this complexity may help to improve forecasting accuracy.