Alexis Grigorieff, Christopher Roth and Diego Ubfal estimate the effect of providing information about the size and characteristics of the immigrant group on attitudes toward immigrants in the United States. They conclude that Republicans and other groups with negative views on immigration become more supportive of immigration when their misperceptions about the characteristics of immigrants are corrected.

People are significantly misinformed about basic facts related to immigration. Survey respondents around the world consistently over-estimate both the size of the immigrant group in their own country (Sides and Citrin, 2007; Herda 2010; IpsosMori 2014), and the fraction of that group with some negative characteristic, such as being unemployed, or being incarcerated (Blinder 2015; Alesina, Miano and Stantcheva 2018; Grigorieff, Roth and Ubfal 2020). There is evidence that these misperceptions have been recently growing in the United States (Herda 2019).

Misperceptions about the size and characteristics of immigrant groups can increase the feeling of threat among natives and lead to negative attitudes towards them. They can exacerbate prejudice, impede the integration of immigrants into society, and drive increased support for anti-immigration policies.

The literature has studied interventions that corrected people’s misperceptions about the size of the immigrant group, but has found only limited effects on people’s attitudes towards immigrants (Sides and Citrin 2007; Hopkins, Sides and Citrin 2019). In a recent paper (Grigorieff, Roth and Ubfal 2020), we find promising results by studying the impact of a comprehensive information package that corrects people’s beliefs not only about the proportion of immigrants, but also about their characteristics.

Testing the effect of correcting misperceptions

We conducted two survey experiments in the US with identical design to estimate the causal effect of our information package in two different samples. The first was conducted in March 2016 with a voluntary response sample of 800 participants recruited on Amazon Mechanical Turk (MTurk), and the second in September 2016 with an online sample of 1,200 participants which matched the US population in terms of age, gender and region of residence.

Participants were asked to estimate a range of statistics regarding immigrants: unemployment rate, incarceration rate, share of immigrants able to speak English, and share of legal and undocumented immigrants. We focused on these characteristics because they relate to policy-sensitive issues and because they can be well documented, which increases the reliability of the information we provide.

A randomly allocated half of the sample was provided with the statistics on these topics, followed by a questionnaire on their beliefs about immigrants and their policy preferences regarding immigration. We also obtained two behavioral measures of their attitudes towards immigrants, first by asking them how much money they wanted to donate to a pro-immigrant charity, and then by asking them whether they were willing to sign a real petition on the White House website in favor of increasing the number of available green cards. We also gathered evidence using a follow-up survey four weeks after our main experiment to examine whether information can durably shift people’s attitudes and policy preferences.

Information leads to correction in beliefs

As Figure 1 clearly indicates, respondents had highly biased (prior) beliefs about immigrants and over-estimated all five statistics: they believed both legal and undocumented immigrants represent a larger fraction than is actually the case, and they thought immigrants are much more likely to be incarcerated, unemployed and less likely to speak English than they actually are. The figure also shows that respondents substantially updated their beliefs after receiving our information treatment (posterior), with a convergence towards the true values. This update in beliefs persisted a month later (posterior follow-up), when they answered the follow-up survey without being reminded about the correct answers. However, after a month, we again saw a small over-estimation of the statistics, which could indicate that repeated interventions might be necessary to achieve more persistent effects. 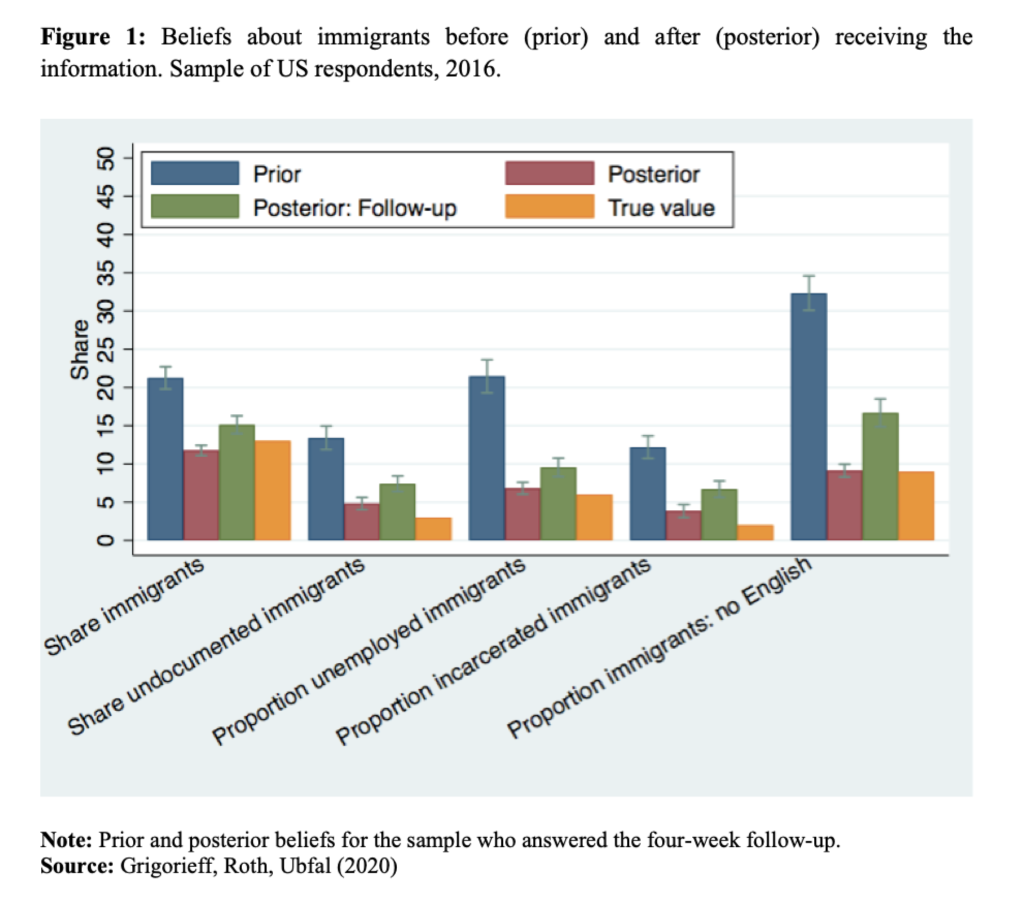 Figure 2 presents separately the treatment effects of our information package for respondents identifying themselves as Democrats or Republicans. All outcome variables are indexes, normalized by the mean and the standard deviation of the value for the control group. The effects are expressed in terms of standard deviations away from the mean in the group that did not receive the information. 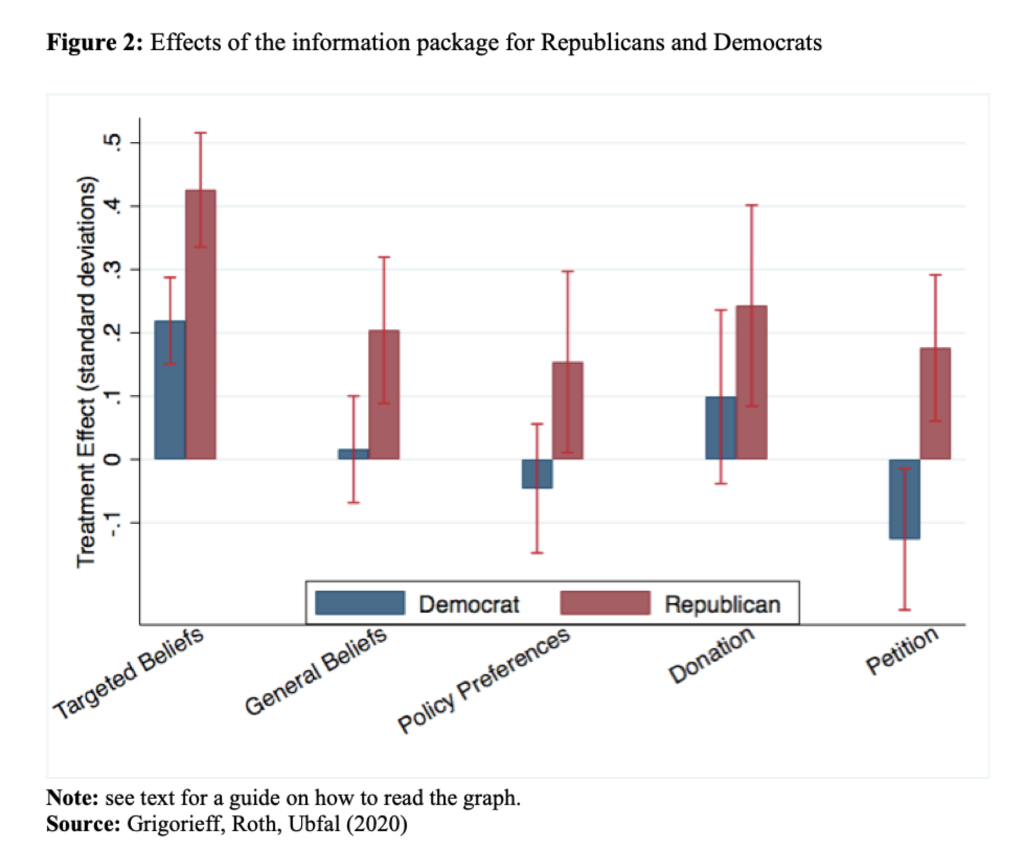 We find significant heterogeneity by political ideology in the impact of the information package on our pre-specified families of outcomes. Republicans, who had more negative attitudes towards immigrants before the intervention, drive most of these effects.

First, we find an average effect of the information package on the index of beliefs that are directly linked to the information provided (this index of targeted beliefs includes questions about the size of the immigrant group and about the characteristics of immigrants included in the information). The effect is of 0.2 standard deviations for Democrats and of 0.4 standard deviations for Republicans. Second, we see that the effect on the index of general beliefs about immigrants, not directly targeted by the intervention, is positive and statistically significant only for Republicans. Third, the same applies to our index on policy preferences. It is important to note that only questions regarding legal immigrants are affected and drive the impact on this index. Finally, we also see that Republicans drive the effects on donations to a pro-immigrant charity and on the intention to sign the petition for increasing the number of green cards.

We hypothesize that Republicans developed more positive attitudes towards immigrants because the information provided in the treatment made them realize that immigrants living in the country are similar to the deserving immigrant category they had formed in their minds (Schachter 2016).

We find very similar effects in both experiments, which gives robustness to our results. These effects persisted four weeks after the intervention in our follow-up survey. Participants who received the information four weeks earlier still remembered it, had a more positive opinion of immigrants, and were more supportive of increasing the number of incoming legal immigrants. However, their policy preferences regarding undocumented immigrants remained unchanged.

Our experiments provide evidence that a package including information on both the size and the characteristics of the immigrant group can affect beliefs for the average respondent and also policy preferences for those with more negative views on immigration. We use a third experiment conducted in more than 10 countries to show that information only on size is not enough to generate significant effects. Consistent with the previous literature (Hopkins, Side and Citrin 2019), we find evidence from the US that informing only about the size of the immigrant group has no significant effects on general beliefs or policy preferences for Democrats or for Republicans.

We provide external validity for these results by showing similar conclusions for the other countries where the same experiment was conducted. This leads us to conclude that information about the characteristics of immigrants is the key component of our information package.

Our findings have important policy implications. They indicate that a reduction in misperceptions about the characteristics of immigrants can lead to less negative attitudes towards them. The government, the media or NGOs could disseminate information about immigrants in order to reduce people’s biases. Future research should test how the credibility of the agent who provides the information can affect its impact. Our results indicate that targeting individuals with the most negative views on immigration and providing objective statistics on the characteristics of immigrants can be an effective way of changing attitudes towards them.

Alesina, A., Miano, A and S. Stantcheva (2018) “Immigration and Redistribution.”

Sides, J. and J. Citrin (2007) “How Large the Huddled Masses? The Causes and Consequences of Public Misperceptions About Immigrant Populations.” In Annual meeting of the Midwest Political Science Association, Chicago, IL.