Individual support for democracy in the population is essential for the stability of democracies. However, not much is known about how demographic change, such as population aging, affects attitudes in this respect. Uwe Sunde shows that support for democracy increases with age, but declines with expected proximity to death. This suggests that a reduction in life expectancy at given ages, for instance in the context of epidemics, might weaken this support.

After decades of world-wide expansion, the model of Western democracy seems to be slipping into recession. Traditionally, the emergence of democracy has been explained by socio-economic determinants at country level, such as income, education, or inequality (Lipset, 1959, Inglehart and Welzel, 2005). Only recently has attention shifted to the determinants of individual preferences for democracy, and here too, socioeconomic factors have been identified (Inglehart and Welzel, 2010). Individual experiences, such as lifetime exposure to democracy, have also been shown to affect institutional preferences (Fuchs-Schündeln and Schündeln, 2015).

Much less is known about the role played by demographic factors. Political scientists have only recently pointed up the close links between demographic change and support for democracy, focusing mainly on population aging related to the demographic transition, and migratory pressure (Goldstone and Diamond, 2020).

An interesting yet subtle point in this context is the role of individual age for democratic support. Do young individuals have less interest in democracy than older individuals who have a richer set of lifetime experiences? Or are the elderly more indifferent to the political regime, potentially because of a shorter expected life span? Do age and remaining length of life affect preferences for democracy in different ways?

From a conceptual perspective, it is natural to assume that the individual life horizon – the expected length of remaining life – should matter more for attitudes or preferences toward a particular political regime than age, simply because the related costs and benefits will be borne by individuals in the future. Historically, life expectancy indeed seems to have influenced institutional development. For instance, the mortality of colonizers has been isolated as a critical determinant of the quality of institutions, which tended to be more exploitative where survival was lower. Based on the conventional indices of political institutions, this differential still exists today (Acemoglu, Johnson and Robinson, 2001).

To explore the distinct roles of age and length of life for attitudes toward democracy, recent work has used data from surveys of more than 260,000 respondents from 93 countries across the world conducted between 1994 and 2014 (Lechler and Sunde, 2019). The individuals responded to a question on their attitudes toward democracy as a way of governing their country. These data were linked to life table information to obtain an objective measure of the length of remaining life for individuals of a particular age and sex in a given country. Life table data provide a source of variation in length of life that is credibly exogenous from the individual perspective. At the same time, the use of repeated observations for particular age cells allows identifying the differential effects of age and life horizon by exploiting variation in expected remaining years of life across age-gender cells over time within the same countries.

The findings show that age and remaining life years both matter for demographic attitudes. Figure 1(a) reveals that individual inclination toward democracy increases with age when holding remaining life years constant. Figure 1(b) shows that, conversely, a decline in remaining life years (i.e., moving leftwards along the x-axis) is associated with a lower support for democracy when holding age fixed. These results turn out to be robust to an extensive set of controls and robustness checks. In particular, they are robust to the inclusion of sex-specific age effects, controls for household size, education, income self-rated health, and years of experience with democracy. 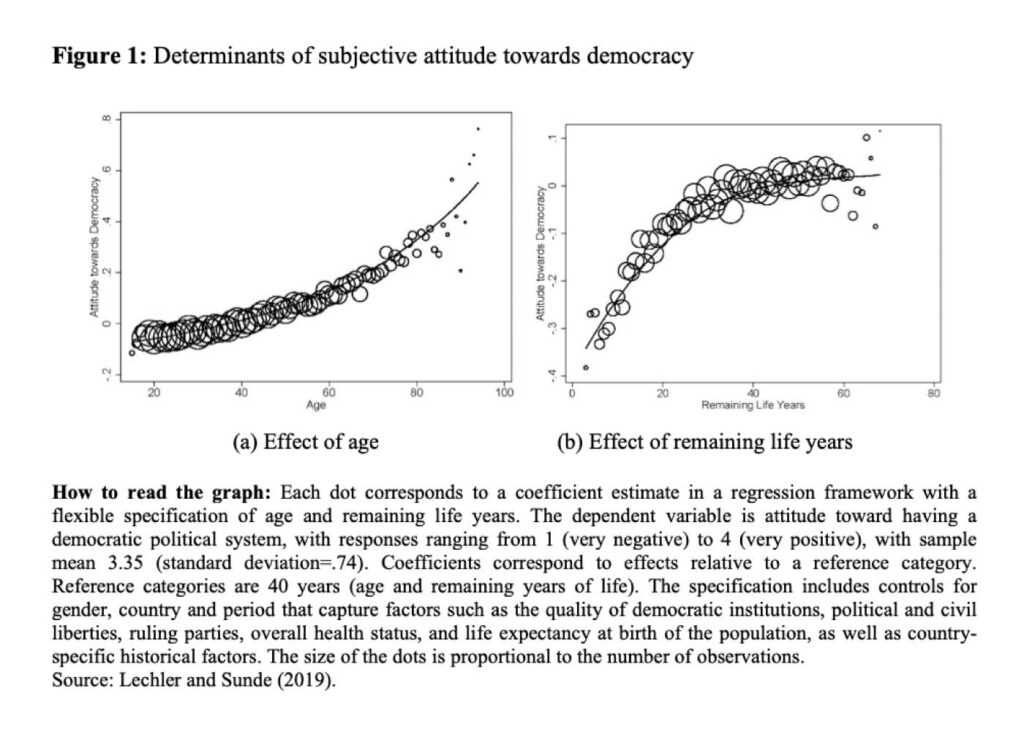 These findings suggest that support for democracy increases with age, but declines with a greater proximity to death. Thus, individuals who anticipate a longer expected life span are more inclined to support democracy. Conversely, support is weakest among young adults with only a short life expectancy, as is the case in many developing countries. This might explain the difficulties in establishing democracies in environments where the population is exposed to poor health conditions or permanent threats due to civil conflict. At the same time, these results suggest that epidemics may threaten the stability of democracies through an erosion of popular support, particularly if the democratic institutions are unable to contain the health consequences in terms of declining life expectancy.

Fuchs-Schündeln, Nicola, and Matthias Schündeln. 2015. “On the Endogeneity of Political Preferences: Evidence from Individual Experience with Democracy.” Science 347 (6226): 1145–8.