More than 200 million women and girls alive today are estimated to have undergone female genital mutilation/cutting (FGM/C), a practice widely recognized to be a violation of human rights and harmful to the health of women and girls (Kimani, Muteshi, and Njue 2016). Most of these women live in Africa (UNICEF 2016). In 2015, the United Nations General Assembly agreed a series of Sustainable Development Goals (SDGs), including a specific target to eliminate FGM/C by 2030 (UN 2015). However, despite such international commitments to end FGM/C, very little is known about the effectiveness of national policies in contributing to the abandonment of this practice. Moreover, although it is known that FGM/C prevalence has been declining in a number of African countries (Koski and Heymann 2017), there is little research documenting the settings where FGM/C prevalence has been falling most rapidly and how socioeconomic differences in the prevalence of FGM/C have changed over time.

In recently published papers, we investigated long-terms trends in FGM/C prevalence in Africa using Demographic and Health Surveys (DHS) and Multiple Indicator Cluster Surveys (MICS). First, we evaluated the impact of a law banning FGM/C in Mauritania and explored whether the new legislation had a significant impact on reducing FGM/C prevalence (Cetorelli et al. 2020). Second, we reconstructed trends in FGM/C prevalence across 23 African countries (Batyra et al. 2020). We examined where the FGM/C rates have changed fastest and whether differentials in prevalence by women’s education and urban-rural residence have been converging or diverging over the last 35 years.

Alongside intensified global efforts to end FGM/C, multiple stakeholders in some African countries have made significant efforts to legislate and communicate about FGM/C in order to eliminate its practice. To help understand whether national policies have been effective in reducing FGM/C prevalence we studied Mali and Mauritania. These countries have marked similarities with respect to practices of FGM/C, but differing legal contexts: a law banning FGM/C was introduced in Mauritania in 2005, while in Mali, FGM/C is not legally prohibited. We reconstructed trends in FGM/C prevalence in both countries from 1997 to 2011. We evaluated the impact of the 2005 law in Mauritania by contrasting trends in FGM/C prevalence before and after implementation of the law, using Mali as the counterfactual country that has not introduced similar legislation.

Figure 1 shows that trends in FGM/C prevalence by birth cohort in Mauritania and Mali were parallel and relatively stable during the late 1990s. FGM/C prevalence in Mauritania began to decline slowly for girls born in the early 2000s, and this decline accelerated for girls born after 2005 when the law banning FGM/C was introduced. However, a similar trend is observable in neighbouring Mali, where no equivalent law has been passed. This suggests that the introduction of the 2005 law in Mauritania did not affect FGM/C prevalence. We conducted additional statistical analysis using a quasi-experimental, difference-in-difference design to ensure that our results are not explained by unmeasured differences between the two countries. The analysis confirmed that the 2005 law did not have a significant impact on reducing FGM/C prevalence in Mauritania. 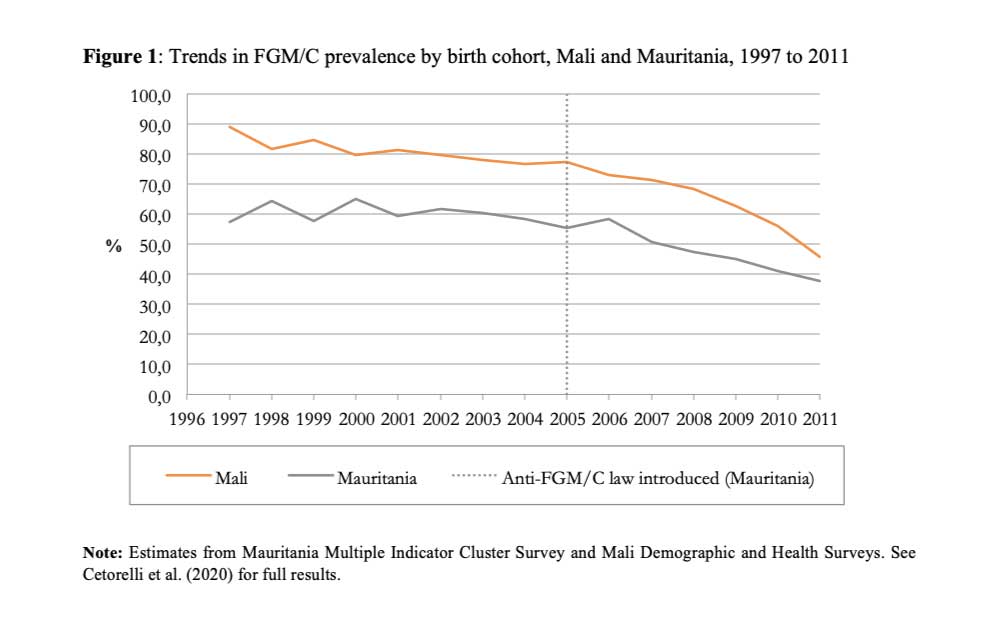 Slower reductions in FGM/C in the highest prevalence countries

Although decreasing rates of FGM/C in Mauritania cannot be attributed to the law banning the practice, and prevalence among the youngest women is as high as 40%, it is evident that the percentage of women with FGM/C has declined across cohorts. Downward trends in FGM/C prevalence have been identified in several African countries, but the settings where declines have been fastest have not been clearly identified. We reconstructed long-term trends in FGM/C rates for women born between 1965 and 1999 for 23 countries and examined the relationship between the initial FGM/C prevalence (among cohorts born around 1965) and the rate of change in prevalence between women born around 1965 and around 1999. 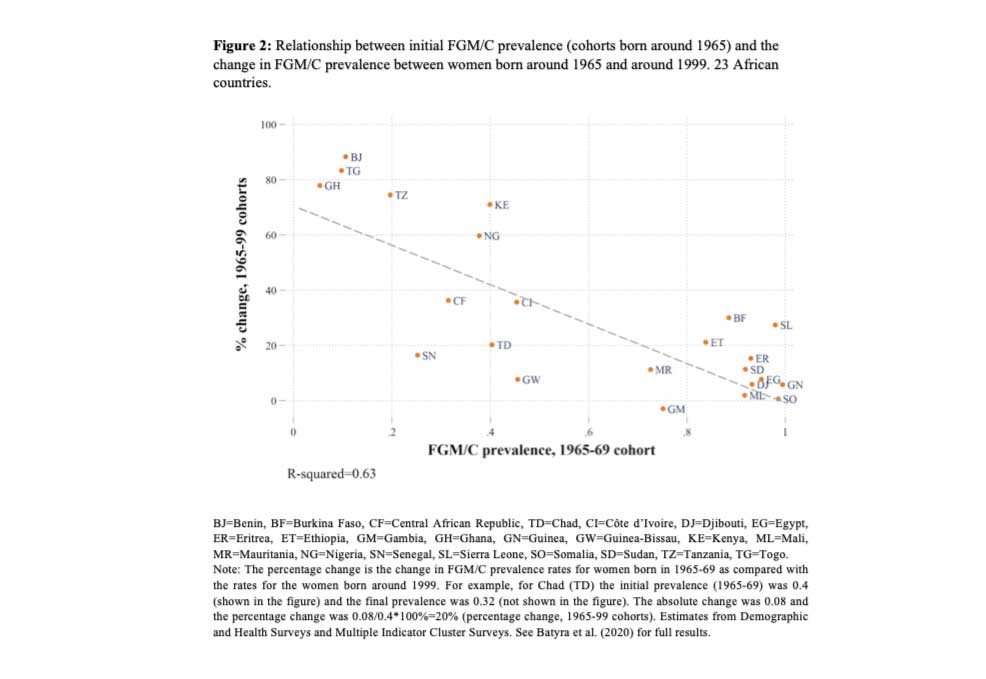 Vast differences in FGM/C prevalence and its rate of change in Africa exist not only between, but also within countries. FGM/C prevalence is known to differ according to women’s socioeconomic status (UNICEF 2016), but there has been lack of cross-national evidence to understand whether differentials in FGM/C rates within countries have been converging or diverging. We estimated differences in prevalence according to women’s education, which is also a proxy for their parents’ socioeconomic status, and place of residence.

Figure 3 shows that prevalence in Africa has been changing at different rates among women with no education and women with some education, over the 35-year period. Despite substantial variation between countries, in the majority of settings these changes have increased the educational differentials in FGM/C prevalence, in particular in countries with moderate-to-high prevalence levels. Our study shows that in many countries, differentials in FGM/C also increased between urban and rural areas. These results can be interpreted as evidence of increasing socioeconomic inequality in the practice of FGM/C in Africa. 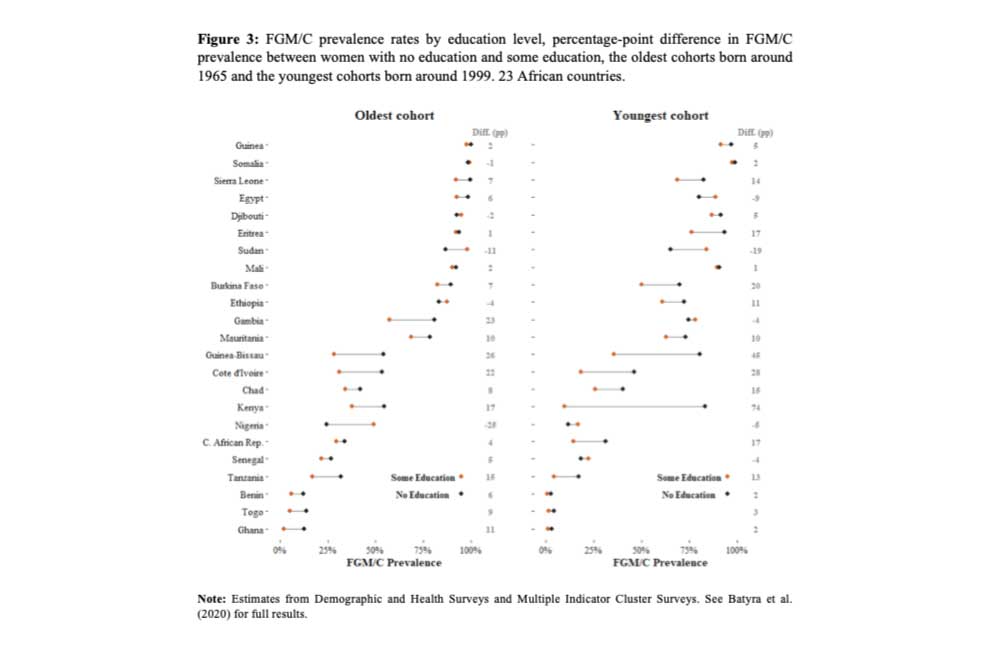 Our findings are important for documenting and understanding the progress towards abandonment of FGM/C in Africa. First, the introduction of laws banning the practice alone might be insufficient to instigate behavioral change with regard to FGM/C and careful assessment of the extent to which declines in prevalence can be attributed to policy changes is needed. Although our results confirm that FGM/C has been decreasing in the majority of African countries, we show that settings with the highest initial prevalence experienced slower relative declines than those where FGM/C was already a minority practice among older cohorts. Given that we also find evidence of increasing educational and urban-rural inequalities in FGM/C, our results highlight that interventions towards abandonment of the practice must be designed to accommodate the vast heterogeneity in FGM/C that exists between and within countries. Attention needs to be focused on implementing and enforcing laws and policies that account for diversity across a wide range of sociocultural and educational domains.

Koski, A. and Heymann, J. (2017). Thirty-year trends in the prevalence and severity of female genital mutilation: A comparison of 22 countries. BMJ Global Health 2:1–8.