Examining couples in both the United States and western Germany, Daniela Bellani and Gøsta Esping-Andersen find lower divorce risks when the division of unpaid work is more balanced. This suggests that more gender egalitarian arrangements tend to reinforce, rather than weaken, couple relations in both countries.

There was a time when the prevailing opinion about family relations was that couple specialization (men working for pay, women staying at home) was optimal for both welfare maximization and partnership stability (Becker, 1981). One would accordingly predict rising divorce rates as women move into paid employment and pursue lifelong careers. The link between women’s new roles and divorce has fueled a large number of empirical studies, but as Özcan and Breen’s (2012) overview concludes, the causal link is far from clear. There is, however, evidence that the conventional male breadwinner model is losing its stabilizing influence on partnerships (Pampel, 2011). And studies implementing a dyadic approach suggest that partner similarity in terms of attitudes, preferences, and behavior increases relationship satisfaction. This, in turn, should positively influence partnership stability (Hohmann-Marriott, 2006).

In this article we focus on two countries, western Germany and the US, from the mid-1980s to the end of the 2000s. Over this period the crude divorce rate in western Germany increased from 2.1% to 2.3% while in the US it decreased from 5% to 3.7% (United Nations, various years).

Norms and the multiple equilibrium approach

How partners evaluate the quality of their relationship in terms of task allocation is largely determined by prevailing gender role norms, but these are not stable over time. As long as the traditional male breadwinner model was the dominant norm, it was associated with a high degree of marital stability. The revolution of women’s roles has eroded this normative equilibrium, however. What are the consequences of this cultural change in terms of marital instability?

Our study aims to answer to this question. While most studies focus primarily on women’s employment status, we focus on couple (dis)similarities in time allocation to work, i.e. whether they are more or less egalitarian in the division of paid work and unpaid domestic labor. It is, of course, of key importance that we can identify variations in the predominance of traditional or gender-egalitarian norms. To this end, we consider how gender norms vary across countries and over time. As to the first dimension, we compare two countries: one, western Germany, with more traditional gender values, and the other, the United States, with greater gender-egalitarianism (Pampel, 2011). As to time trends, in the period from the mid-1980s until the end of the 2000s, we see a common trend toward gender egalitarianism (Schober & Stahl, 2014; Schwartz, 2010).

Using data from the German Socio-Economic Panel (SOEP) and the US Panel Study of Income Dynamics (PSID), we distinguish three time periods between the second half of the 1980s and the end of the 2000s to proxy shifts in gender role attitudes. We measure the level of dissimilarity in (un)paid work as the (absolute) difference in the number of weekly hours spent by the husband in (un)paid work minus time spent by the wife.

Disregarding period change for the moment, a simple U.S. – western German comparison brings out clear differences in the link between partners’ (dis)similarities and divorce risks (see also Bellani et al, 2018). In Germany, between the end of the 1980s and the end of the 2000s, we observe a stabilizing effect of adopting a dissimilar division of unpaid domestic labor. Put differently, German partners who adopted more equal division of unpaid work were also at greater risk of divorce. This was not the case in the U.S., where we observe a stability premium for couples who share unpaid work more equally.

Turning to the influence of changing gender role norms across time (from the mid-1980s to 2010), we find clear evidence of rising divorce risks among American couples who adopt a more unequal division of work, unpaid domestic labor especially (Figure 1). In other words, in tandem with period shifts in favor of more gender-egalitarian norms (Pampel, 2011), U.S. couples who adopt more gender-symmetric arrangements reap a statistically significant stability dividend. 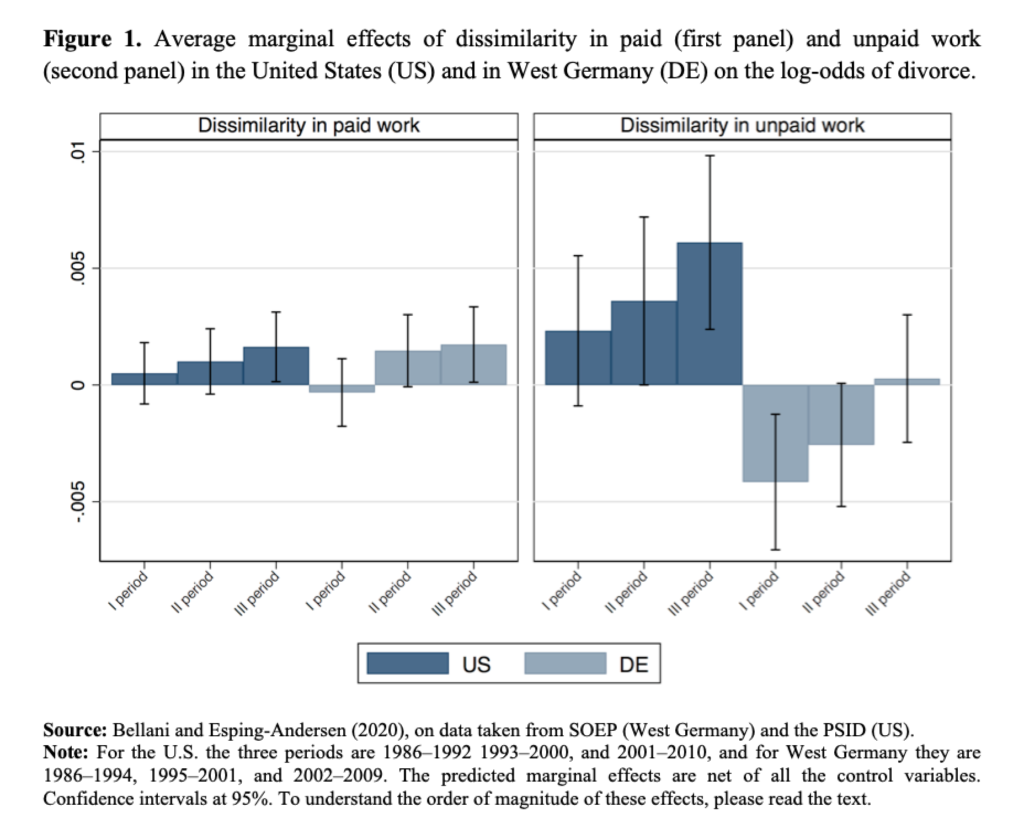 The results for the United States confirm the prediction that gender egalitarianism will foster greater partnership stability. No so much in the earliest period (late 1980s), when we observe no significant divorce effect associated with the degree of dissimilarity in the division of labor. In recent decades, however, higher levels of gender dissimilarity in paid and in unpaid work have been associated with higher divorce risks. For instance, in the latest period considered, if the difference between the partners’ weekly hours in paid work increases by 10 hours, the probability of divorce increases by about 0.20 percentage points, while an equivalent increase in dissimilarity of time spent on domestic tasks raises the risk by about 0.60 percentage points. In short, couples who move towards greater gender equality also enjoy more stable relationships.

The patterns that we observe for western Germany are different, although the trend is the same. In the earliest period, couples with a more unequal gender division of domestic tasks tend to be more stable. This ‘traditionalism premium’ is now weakening, however, and in the most recent period (2002-2009) gender inequality in domestic work is no longer associated with greater couple stability. For western Germany, in the first period, a 10-hour increase in dissimilarity of time spent in unpaid domestic work was associated with about a 0.45 percentage point decrease in the probability of divorce, whereas in the most recent period the level of dissimilarity is no longer associated with a difference in marital stability.

To conclude, our analyses seem to provide support for the prediction that when social norms move towards greater gender egalitarianism they also appear to produce greater couple stability.

The meaning of nonmarital cohabitation differs in the two countries. Western Germany has a modest level of cohabitation, and fertility is strongly associated with marriage (Le Goff, 2002). In the United States, nonmarital cohabitation has become common, but it tends to be short-lived and is clearly not an equivalent to marriage (Heuveline & Timberlake, 2004). For this reason, we do not believe that our results are significantly affected by potential bias in the selection into marriage.