The article explores the relationship between becoming a grandmother and retiring in Italy. In contrast to the US and other countries in Europe, the two events do not overlap in Italy, and the former hardly influences the latter. Francesca Zanasi and Inge Sieben interpret the findings in relation to the familistic structure of Italy.

In most Western countries, women who become grandmothers are likely to be still in employment (Leopold and Skopek 2015), and this might conflict with their expected role as care provider. Consequently, in a variety of institutional settings, grandmotherhood is associated with a reduction in working hours (Rupert and Zanella 2018), and earlier retirement (Van Bavel and De Winter 2013).

The relation between grandmotherhood and retirement has not yet been investigated in Italy, where the shortage of public childcare services makes grandparental childcare a precious resource for working mothers. In a recent study (Zanasi and Sieben 2020), using retrospective data on women born up to 1949 drawn from the ISTAT Multipurpose Survey on Family and Social Subjects (FSS) 2009, we consider the demographic and institutional characteristics of the Italian context to draw a picture of Italian grandmothers’ retirement behavior.

The overlap between grandmotherhood and employment

The familistic structure of Italian society, where the family, especially its female component, is expected to assume care responsibilities, has important implications for the study of women’s mid-life employment.

Italian women tend to postpone (or avoid) motherhood, because they find it difficult to reconcile work and family, especially when public childcare services are in short supply (Cantalini 2019). The increasing age at motherhood is leading to a parallel increase in the age when women become grandmothers (Di Gessa, Bordone, and Arpino 2018). The difficulty of reconciling work and family is also among the causes for the exceptionally low female labour market participation rate. As women are expected to carry out care duties, those in employment often quit their job after a birth. Moreover, up until the 1990s, the pension system implicitly encouraged early retirement, especially for women (Brugiavini and Galasso 2004). Consequently, up to the birth cohort of 1949, only a small proportion of mid-life women were still in employment in their 50s (Figure 1). 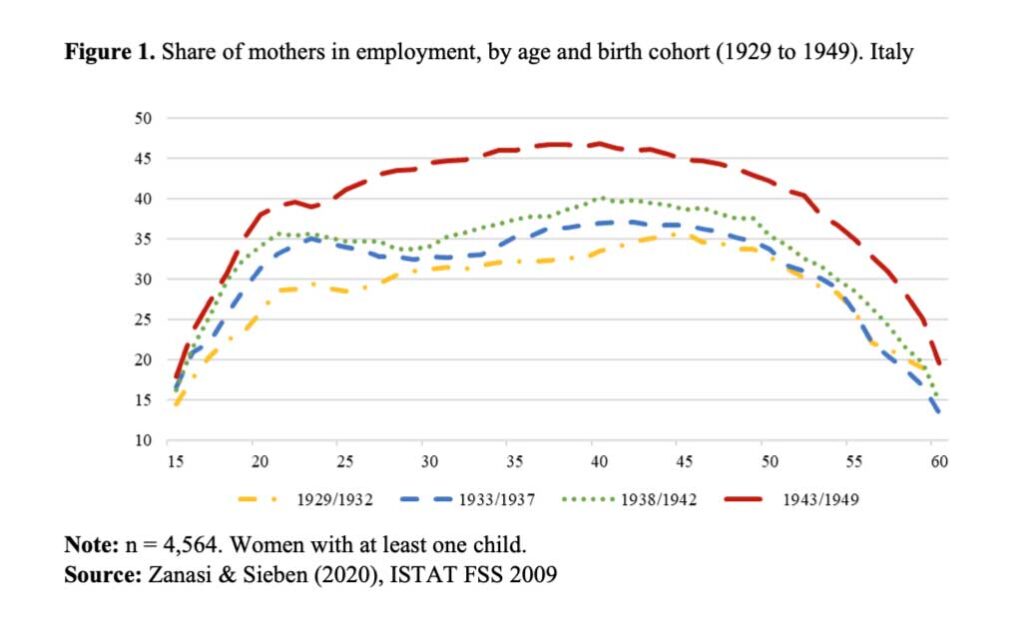 This means that contrary to most other Western countries, the overlap between grandmotherhood and employment is minimal in Italy (Leopold and Skopek 2015). To assess its extent, we compared the median age at grandmotherhood and that of labour market withdrawal (LMW, indicated by the age when a woman retires from paid work) for a sample of 1,819 women still in employment at age 50 (out of a sample of 4,564 women, including housewives and early retirees). We controlled for education, as it is strongly related to fertility and labour force attachment.

Figure 2 shows that the median age at LMW is 53 years. Primary-educated women stop working earlier (around 50 years) than tertiary-educated women (60 years), and they also tend to become grandmothers earlier (55 years vs. 66 years). Across all educational levels, grandmotherhood tends to occur 5-6 years after labour market exit, suggesting an absence of temporal overlap between the two events. 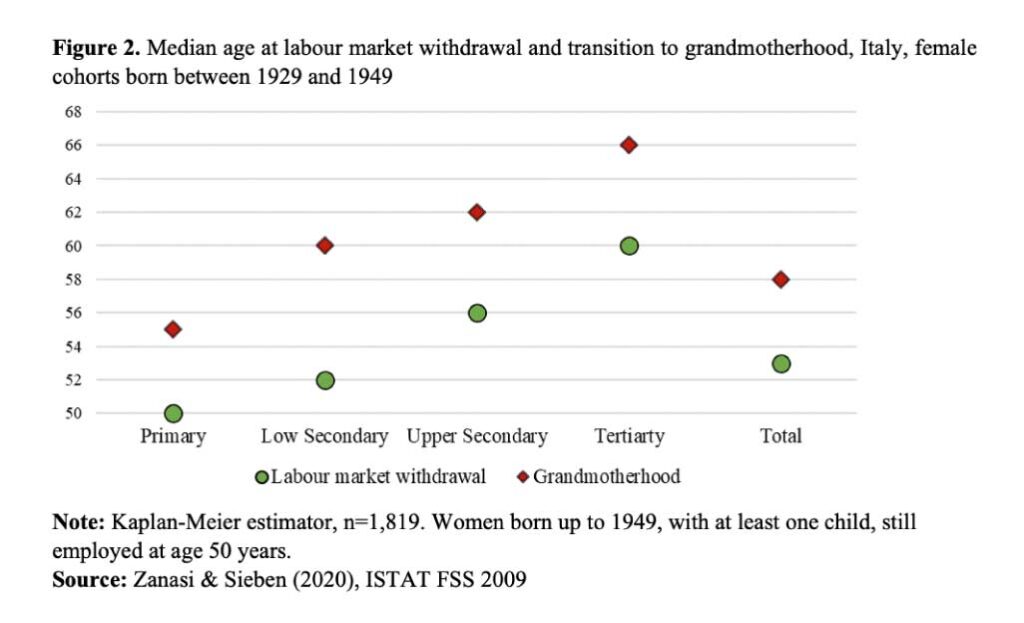 To better measure the impact of grandmotherhood on retirement, we inserted both variables in a model that included the working history of ever-employed women (n=1,819) measured via the combination of seniority and type of occupation. Women at the top of the social hierarchy (e.g. holding highly qualified jobs) had longer and more stable working careers, whereas working-class women usually had employment interruptions for family reasons or due to unemployment.

The results, not shown here, are drawn from a fixed-effects model controlling for time-varying individual characteristics: age and calendar year. They indicate only a small direct effect of the transition to grandmotherhood on retirement: within two years of becoming grandmothers, women are 2 percentage points more likely to retire. This result has general validity: we find no meaningful difference in retirement behaviour following the birth of the first grandchild between different work-history groups.

The working life of Italian women born before 1950 was barely affected by grandparenthood, contrary to what happened in other Western countries. This could sound like good news: labour market attachment is generally considered beneficial for society and for women themselves, in terms of autonomy and higher future pension benefits, for instance. However, the reason could lie in the familistic nature of the Italian welfare system, which discourages fertility and female labour force participation.

Since childcare services are scarce, mothers face a work-family conflict and many do not work: in our sample, less than 50% were in employment. Mid-life women who provide (grand)childcare may be life-long housewives, with no need to retire early to look after grandchildren. At the same time, young mothers may themselves leave employment to look after children, not needing grandparents as care providers. In any case, retirement has until recently preceded the transition to grandmotherhood for Italian mid-life women, perhaps due to the availability of early retirement options.

However, there are reasons to expect an upsurge in work-family conflict for more recent cohorts of mid-life women whose labour market participation is growing rapidly: although still low by European standards, it almost doubled between 2009 and 2019 (Table 1 – left panel). For women of reproductive age, on the other hand, it has decreased slightly.

Retirement age has increased as well (up to 66 years for public employees, not shown here), and so has age at first child (Table 1 – right panel), potentially postponing further the entry into grandmotherhood.

These three phenomena could lead to an overlap between employment and grandparenthood like the one already observed elsewhere in Europe – thus threatening the “reserve” of available housewives-grandmothers who still play an important role in a context of limited public childcare provision: about 20-24% for children aged 0-3 years (ISTAT 2020). In short, if Italy wants to sustain its fertility without investing in childcare services, female employment is going to be affected: either grandmothers must leave paid work to provide childcare, or mothers will have to face employment discontinuities around motherhood.

Di Gessa, G., Bordone, V., and Arpino, B. (2018). The impact of fertility and education on changes across cohorts and geographical areas in the demography of grandparenthood: the Italian case. RECSM Working Paper(55).