In Norway, as the number of children increases, mortality generally falls or remains almost constant. However, Øystein Kravdal notes an exception when it comes to cardiovascular disease mortality: for men who already have three children, the disadvantages associated with further childbearing more than outweigh the advantages. This is apparently linked to a higher chance of being overweight, partly because of less physical activity.

The relationship between the number of children a woman or man has and their chance of dying within a subsequent period has been analysed in several studies of contemporary rich populations, where few have more than four children. (See Kravdal 2019 for a discussion of the usefulness of such research). Three pathways contribute to the relationship:

The first pathway is, of course, only relevant for women. However, if a relationship between number of children and a certain disease risk is observed only for women, it cannot be concluded that biological mechanisms are the only drivers, as lifestyle effects and selection mechanisms may differ by sex, or be relevant to only one. For example, a link between childbearing and use of oral contraception is relevant only for women, and may contribute to the reduced incidence of Crohn’s disease among women with a young child (Kravdal et al. 2020a).

It is widely agreed that childless people have higher all-cause mortality than one-child parents, while those with two or more children have the lowest mortality. The evidence is more varied for larger families. Some researchers have observed slightly elevated mortality for those with many children compared to two-child parents, while others have reported a small continuous decline as the number of children increases above two. In particular, studies focusing on men, or on cardiovascular disease (CVD) mortality rather than all-cause mortality, suggest a higher mortality for those with relatively many children. The variation in results reflects differences in the age groups considered and in the variables controlled for. Additionally, the lifestyle effects of childbearing, or the selection mechanisms, may differ between countries because of social policies or other factors.

Such investigations take account of the fact that a person’s number of children is partly a result of education, and is also linked to marital status. In a recent analysis based on register data for the entire Norwegian population, we also controlled for repartnering, spouse’s education (if any), county of residence, and whether the municipality of residence was a city (Kravdal et al., 2020b). Additionally, like in some (but not all) earlier studies, we took account of the fact that people with many children are likely to have started their reproductive career earlier, which is also known to be linked to mortality. The negative association between mortality and number of children up to two was confirmed. For example, childless women were found to have 69% higher mortality than two-child mothers, while the corresponding figure for men was 48% (Figure 1). Mortality was significantly lower for those with more than two children, but the differences were small. However, a slightly higher mortality appeared for men with four or more children compared to those with two when age at first birth was not controlled for.

The picture looks somewhat different when the focus shifts to CVD mortality, which accounts for a large share of all-cause mortality. Men with four or more children had a 5% higher chance of dying from CVD than two-child fathers (Figure 1), and their chance of dying from stroke in particular was 12% higher. Among women, CVD mortality among those with four or more children was not significantly different from that of two-child mothers. 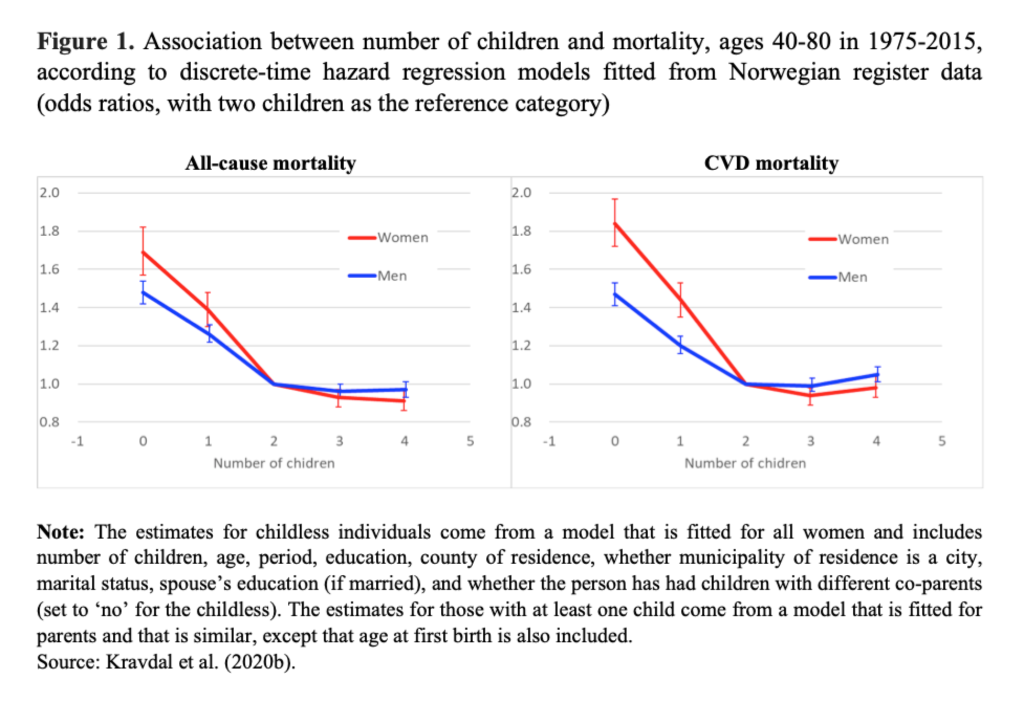 In order to shed light on the mechanisms responsible for the relationship between number of children and CVD mortality, we analysed the association between number of children and three lifestyle factors believed to increase the CVD risk: smoking, high alcohol consumption, and physical inactivity. Additionally, we considered four health conditions assumed to have adverse effects: obesity, hypertension, high cholesterol level, and diabetes.

Differences in smoking and alcohol use did not appear to contribute to the high CVD mortality of childless people compared to two-child parents. However, all other CVD risk factors seemed to play a role: Childless people were more frequently physically inactive (men at least), and more likely to be obese and to have high cholesterol, hypertension or diabetes. Those with four or more children tend to smoke less and have lower alcohol consumption, which helps to lower their CVD mortality with respect to two-child parents, while higher likelihood of obesity and less physical activity have the opposite effect.

The underlying pathways are likely complex. In addition to affecting the three life style factors just mentioned, which in turn influence mortality partly through the four health conditions, childbearing may affect women’s health through biological mechanisms. Furthermore, other lifestyle factors and health conditions may also play a role, and a number of factors not taken into account in the analysis may affect both fertility and lifestyle, health or CVD mortality. Finally, causality in the observed relationship between number of children and some of the measured lifestyle factors and health conditions may also run in the opposite direction. For example, a pre-existing situation in young adulthood (such as diabetes), may have influenced fertility.

To conclude, the main pattern is that CVD mortality and all-cause mortality in Norway fall as the number of children increases or, for the largest families, remain almost unchanged. However, there is an exception with respect to CVD mortality: for men who already have three children, the disadvantages caused by – or at least associated with – further childbearing more than outweigh the advantages. This is apparently linked to a higher likelihood of being overweight, partly linked to less physical activity.

Kravdal, Ø. (2019). What kind of individual-level effects of childbearing would we ideally be interested in learning about? The important distinction between expected, unexpected, varying and general effects. Journal of Population Research 36: 1-12

Kravdal, Ø., P. Magnus, B. Moum, and M. L. Høivik (2020a). Association of childbearing with a short-term reduced risk of Crohn disease in mothers. American Journal of Epidemiology, kwz285.