Philipp M. Lersch studies the relationship between people’s number of siblings and their economic wealth in Germany. He finds that additional siblings reduce wealth by about 38%. Parental wealth moderates the association so that sibship size is more negatively associated with filial wealth when parents are wealthier.

How does people’s number of siblings affect their wealth, including the total amount of their material possessions such as savings, real estate and cash, less any debts and loans? As wealth shapes people’s life chances and opportunities, it is important to address this question to gain a better understanding of how the family of origin influences people’s life chances (Killewald, Pfeffer and Schachner 2017).

In a recent paper, I show that additional siblings reduce wealth by about 38% in Germany (Lersch 2019). Parental wealth moderates the association so that sibship size is more negatively associated with filial wealth when parents are wealthier. These results are obtained by utilizing high-quality data from the German Socio-Economic Panel Study (SOEP) for the years 2002, 2007 and 2012, which allow to directly link parents and their adult children living in separate households and to measure the wealth of both generations. I include 6,388 (partly repeated) observations from 3,502 individuals nested in 2,628 families, where I focus on the filial generation and include all respondents whose parents are observed in the SOEP at least once since 1984. Children are observed between ages 18 and 59 with a median age of 33, and mothers are 27 years older on average. Missing values are multiply imputed. The code for the analysis can be found here.

Parents’ wealth is directly linked to adult children’s wealth because it can be transmitted to the next generation through inter vivos transfers and inheritance (Keister 2003). Parental wealth is also indirectly linked to children’s wealth, as it influences their education and cognitive development (for instance, through private schooling, tutoring, expensive free time activities) which subsequently determine their adult income and their capacity to accumulate wealth.

From a resource dilution-perspective these relationships are highly dependent on the number of siblings in the family: the greater the number of siblings in the family, the more thinly parental resources are spread between them (Blake 1989: 10ff). In other words, parents have less wealth to give to each sibling and to support their children’s development and education. This should result in less wealth among people with more siblings. Indeed, previous studies examining the number of siblings and wealth in the United States and Australia, generally find negative associations (Keister 2003, 2004; Parr 2006). However, most of these studies do not directly control for parental wealth and other parental characteristics such as risk preferences, which may simultaneously affect fertility and filial wealth.

Furthermore, these studies neglect important heterogeneity in the association between people’s number of siblings and their wealth. First, resource dilution may be non-linear. For instance, for a family with two children, parental resources that can be invested into each child are halved with respect to a one-child family, but in a family with three children, one-third of parental resources may be invested in each one. A nonlinear pattern may also arise because some positive consequences of having siblings (such as mutual support and socialization) may counterbalance the negative consequences of sharing some resources with them. Finally, the consequences of growing up with more siblings may depend on the wealth of parents; having more siblings may be more “harmful” in rich families because wealth is available and can be diluted, while for poor families without wealth dilution is inconsequential.

Overall, my results confirm previous findings about the negative relationship between number of siblings and personal wealth. Figure 1 shows how net wealth decreases with each additional sibling up to three. The relationship seems largely linear. People with one sibling have about 6.00 points of wealth on the inverse hyperbolic sine (IHS) transformed scale (similar to a log-transformation), which is statistically not significantly different from only children. Those with two siblings have significantly less wealth than only children, but have similar wealth compared to those with one sibling. Those with three siblings have about 4.09 points of net wealth. The differences by sibship size then taper off and those with four or five siblings do not have less wealth than those with three siblings. However, only about 10% of individuals have more than three siblings. 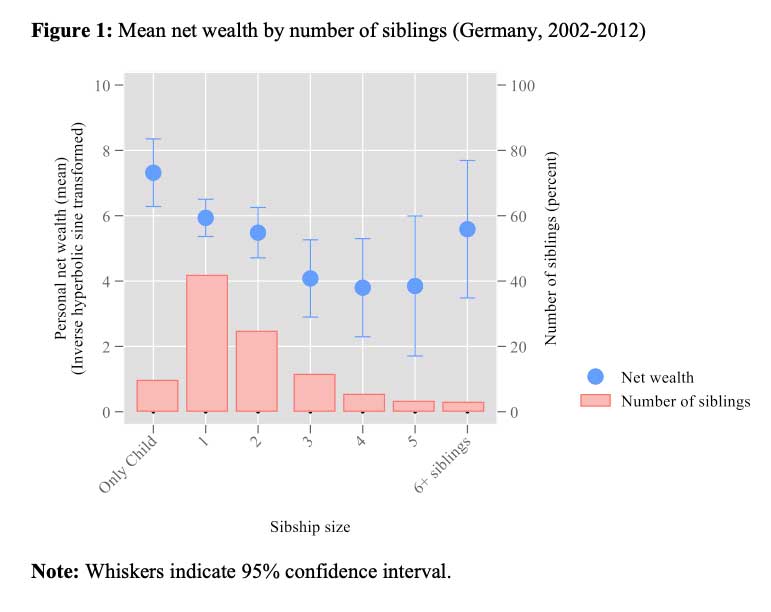 Once additional control variables (including parental risk preferences and whether parents have died) are considered in a multivariable model, the estimated effect for number of siblings indicates that each additional sibling reduces wealth by about 38%. To put this in perspective by comparing effect sizes of number of siblings and age, everything else equal, individuals need to accumulate wealth for about two more years, based on the current data, to offset the disadvantage of having an additional sibling. 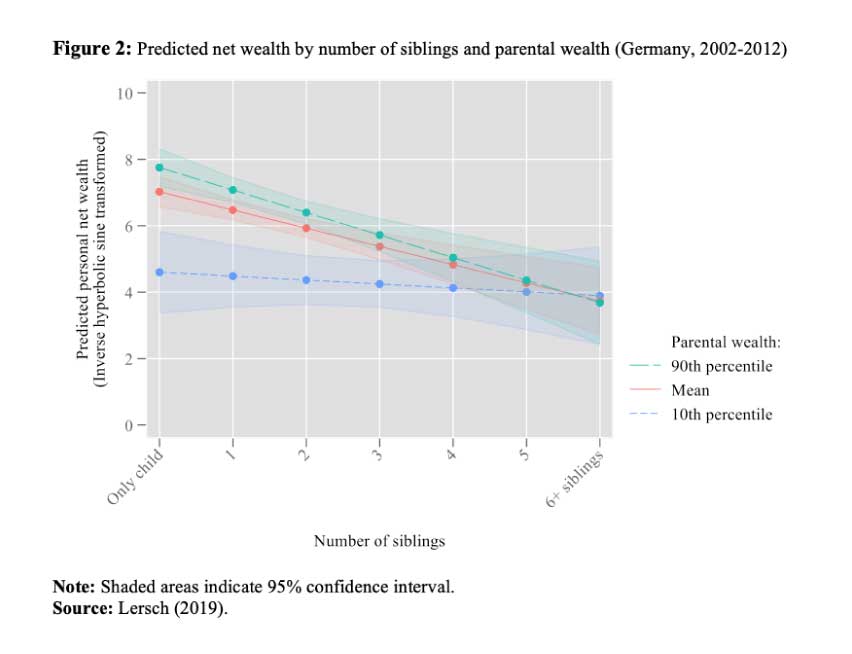 My findings underline the important role of the family of origin and more particularly of the number of siblings for wealth attainment. The results suggest that fertility in the family of origin has a systematic impact on wealth attainment and may contribute to population-level wealth inequalities independently of other socio-economic characteristics such as parental wealth. At the same time, the association between number of siblings and wealth is shaped by parental wealth in Germany, where additional siblings are more adverse for wealth attainment when parents are wealthier. It is also noteworthy that fertility itself may be affected by parental wealth, and this may also shape the intergenerational transmission of wealth inequality.

The relevance of fertility in the family of origin may increase in the coming years because, for several years now, the unprecedented wealth accumulated during the economic prosperous post-war period in many Western European countries including Germany has been transferred to the following generations (Bach and Thiemann 2016), and this is not yet fully captured in the current data. In this context of large direct transfers, for which dilution is most likely, the association between sibship size and wealth may become more critical.