Female education is often linked to lower fertility levels and higher rates of childlessness. However, this relationship does not necessarily hold for all population groups. In this study, Nitzan Peri-Rotem (2020) shows that among religiously observant women in Britain and France, higher education goes hand in hand with a relatively large family size.

Across post-industrial societies, increased levels of education for women are associated with delayed childbearing and lower fertility rates (Mills et al. 2011). This relationship is often explained by enhanced educational and career opportunities, which offer alternative and competing aspirations to traditional family roles (Esping-Andersen, 2009). In addition, economic theories predict that the opportunity costs of children will be higher among better educated women, due to the greater loss of income when labour market participation is interrupted by childbearing and rearing (Becker, 1991). However, it has been suggested that for some religious groups, increasing education does not necessarily lead to a decline in fertility, since higher religious involvement can affect the actual or perceived costs and benefits associated with having a large family (Lehrer, 2004).

Religion and the opportunity cost of childbearing

Various aspects of religious commitment, including religious affiliation and attendance at religious services, are associated with higher levels of fertility. Across Western countries, individuals affiliated with a particular religion have more children than unaffiliated individuals, and, within each denomination, those who regularly attend religious services have higher fertility levels than those with lower religious participation (Peri-Rotem, 2016). These patterns are mainly attributed to the centrality of children and family life among the major religious traditions. Furthermore, members of a given religious group who conform to its prescribed fertility norms are often rewarded through social approval and higher status within their community (Lehrer, 2004).

Other studies have also pointed to the increased social capital among those who regularly attend religious services, as religious congregations promote the formation of social networks, where different types of emotional and practical support are exchanged between members (Chatters and Taylor, 2005). As a result, religious people may be better supported by their community when seeking to expand their family. Thus, while higher levels of education for women often lead to the increased opportunity cost of childbearing and exacerbate the conflict between family and work, this effect is assumed to be less pronounced among women with higher religious involvement. Therefore, greater religious involvement is likely to moderate the negative association between education and fertility (see Figure 1 for an illustration of the expected interrelationships between religion, education and fertility).

Britain and France as case studies

This study uses data from the British Household Panel Survey (University of Essex, 2010) and the French Generations and Gender Survey (INED–INSEE, 2005) to explore differences in completed fertility by level of education, and the way this relationship varies by religious affiliation and practice among women in Britain and France. These countries were selected for this study as they share some socio-demographic characteristics and geographical proximity, while differing in their religious composition; in France, the dominant religion is Roman Catholicism, whereas the established religious institution in Britain is the Church of England. Thus, most British Christians identify as Protestants, and about a tenth of the population there identify as Roman Catholics (Peri-Rotem, 2020). Over the past decades, both countries have experienced a marked decline in religious participation rates, with recent figures showing that just over a tenth of French and a fifth of the British population attend religious services on a monthly basis (Peri-Rotem, 2016). Yet, over half of the populations in Britain and France identified as affiliated with a particular religion in 2010 (Peri-Rotem, 2020).

The study sample includes women from Britain and France aged 40-80, who have completed, or nearly completed their childbearing years. In each country, we distinguish between women who state having no religion, those who are nominally affiliated (who identify as Catholic or Protestant, but attend church less than once a month) and practising religious women (attending church at least once a month)¹. For women in each religious group, we estimate the educational gradient in completed fertility, adjusting for birth cohort, place of birth and marital history. 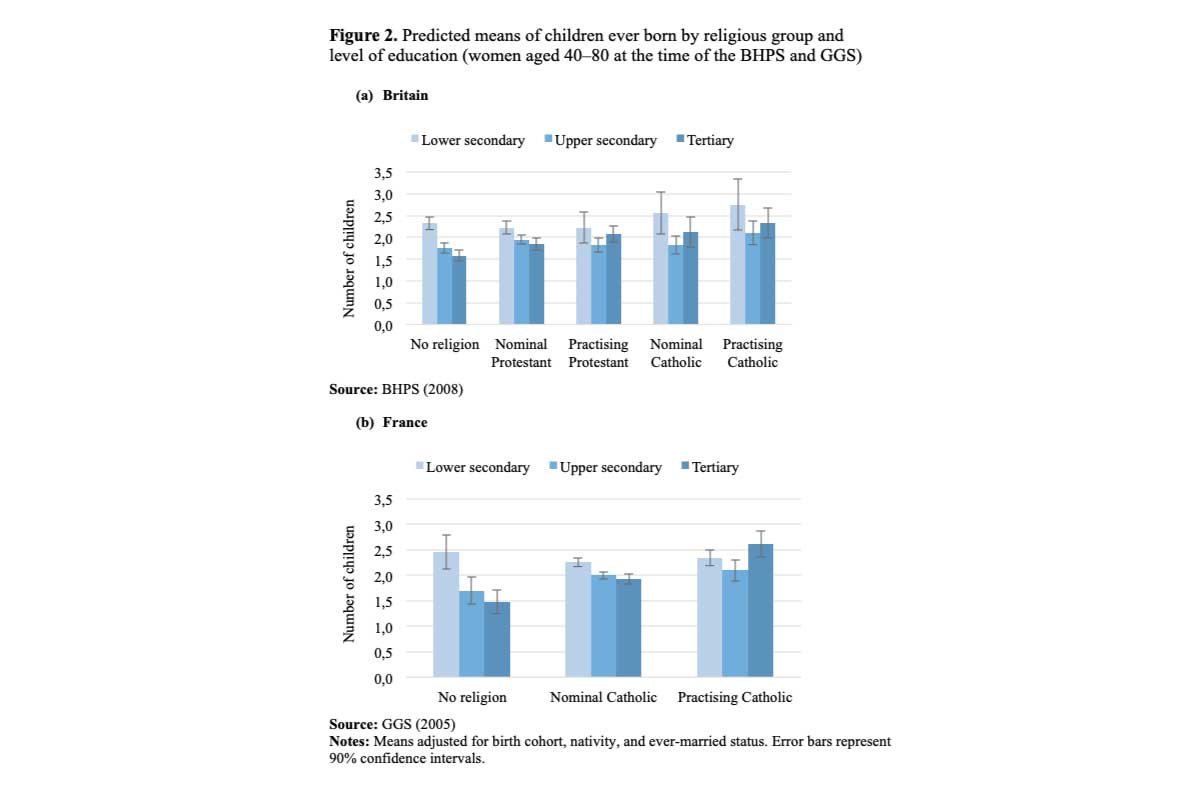 This study demonstrates that the effects of female education on fertility levels are not uniform across different segments of society. While higher education generally leads to having fewer children, this is not the case for women who regularly attend religious services. These findings are attributed to differences in available sources of support and in the perceived costs and benefits of children among women from different religious groups. Religiously active women are more likely to benefit from social rewards when complying with high fertility norms and to be supported in achieving this goal. Furthermore, in a cultural context where having a large family is highly valued, women with increased earning capacity are more likely to utilise their resources towards fulfilling their fertility aspirations. These findings contribute to understanding the particular conditions in which increased levels of education may lead to lower fertility.

Lehrer, E.L. (2004). Religion as a determinant of economic and demographic behavior in the United States. Population and Development Review 30(4): 707-726.

Peri-Rotem, N. (2016). Religion and fertility in Western Europe: Trends across cohorts in Britain, France and the Netherlands. European Journal of Population 32: 231–265.

¹ Non-Christian denominations are not included in this study due to insufficient sample sizes.