Nowhere in Europe is the share of births out of marriage larger than in Iceland. Nevertheless, most Icelanders marry. In this article Ari Klængur Jónsson argues that even though the link between marriage and childbearing appears tenuous, marriage is not an obsolete social institution in Iceland.

Across Europe, childbearing and marriage are becoming increasingly uncoupled. Marriage rates have declined since the 1960s, the number of cohabiting couples has increased, and more children are born to unmarried mothers (Figures 1 and 2). 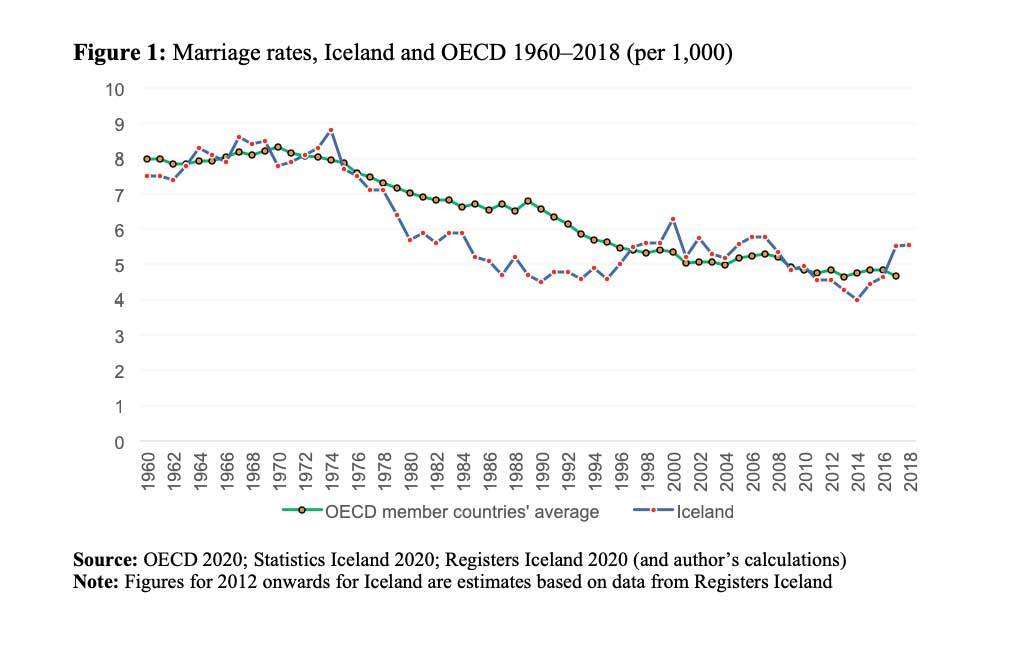 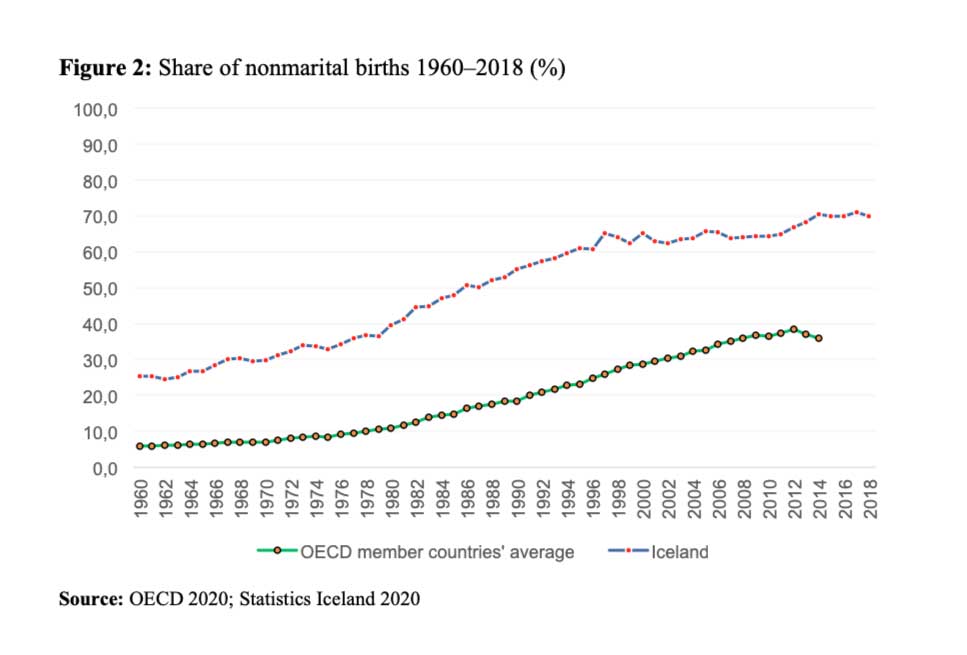 Iceland is among the vanguards in this development: nowhere in Europe is nonmarital childbearing more prevalent. According to recent data, seven out of ten Icelandic children are born to unmarried mothers: 83% of first-born; 67% of second-born; and 53% of third-born (Statistics Iceland 2020). This relatively high proportion of nonmarital births has received international attention and raised questions about the future of marriage in Iceland. However, a quick glance at official statistics shows that Iceland’s crude marriage rate is on par with the average level of other OECD-countries (Figure 1), which on the surface may appear counter-intuitive given the frequency of out-of-wedlock births. In what follows, I give my reflections about the state of affairs in Iceland in terms of marriage and why the nonmarital birth rate is as high as it is.

Why are so many Icelandic children born out of marriage?

Iceland has a long tradition of nonmarital childbearing and cohabitation, which presumably dates all the way back to the island’s settlement in the 800s and the “Old Norse culture” with its alleged high degree of gender equality and liberal attitudes towards premarital sexual relations. Ever since official statistics were first published (mid-1800s), the proportion of premarital births in Iceland has been exceptionally high. In the 1940s, one in four children was born to an unmarried mother, compared to slightly more than one in five in the 1870s. It has been suggested that the high rate of illegitimacy in the 19th and early to mid-20th century is a consequence of nonmarital or premarital cohabitation – which again has been associated with the long-lasting effects of “festar”– a medieval version of common law marriage – and the historical failure of the Christian Church in Iceland to preach the moral superiority of marriage. In previous centuries, even the leading churchmen and bishops had illegitimate children, with no social stigma attached to it. Nevertheless, even though nonmarital cohabitation has strong historical roots in Iceland and is an integral part of its culture, marriage has been and still appears to be the final outcome for the majority of the population. According to the 2011 population census in Iceland, about 70% of people aged 40-44 were ever-married compared to about 90% of those aged 80-84 years-old (and still alive in 2011). Why then, are 70% of children born outside marriage in Iceland?

My recent results show that first childbearing and first (registered) cohabitation are closely associated in Iceland: at age 28, about 60% of women have given birth and the same proportion (but not necessarily the same women) has registered cohabitation (Figure 3). Eventually (by age 46), about 90% of women are mothers, and 80% have cohabited at least once. 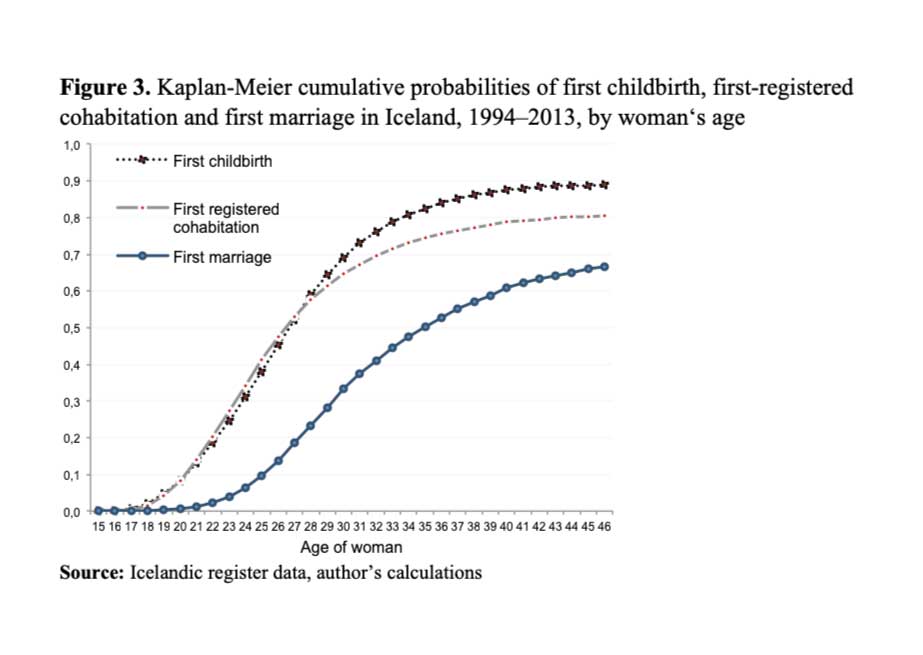 The proportion of ever-married women increases more slowly: it reaches 50% by age 35 and remains just below 70% by age 46 (Figure 3). More sophisticated analyses further indicate that the official registration of a cohabiting union is often associated with first childbirth, and that the propensity to marry increases with each additional child: on average, mothers of two, three, or four children have a 30-40% higher risk of marriage compared to one-child mothers, and a 50-60% higher risk than childless women (Jónsson 2020). This shows that while cohabitation is the main family-building institution in Iceland, marriage appears as a later-in-life milestone of family change, considering that the majority of first-registered cohabiting unions are later transformed into marriages.¹

Apart from historical factors, the second reason behind Iceland’s current frontrunner status in terms of cohabitation prevalence and the high proportion of nonmarital births can presumably be traced to progressive legislation on nonmarital cohabitation as an accepted family form. Since the mid-20th century, various steps have been taken to enhance the rights of cohabiting couples – making this type of union more marriage-like. Today, if their union is registered, cohabiting and married couples share the same obligations and rights in terms of, for instance, childbearing and childrearing, including child and other family-related benefits. Paternity is automatically recorded if couples have registered their cohabitation; biological cohabiting parents have the same rights to parental leave as married couples; and both cohabiting parents and married parents have joint child custody if they separate. With some simplification, the main differences between marriage and registered cohabitation in Iceland concern personal finances, in particular the partners’ status in relation to union dissolution and inheritance.

Most children in Iceland will spend part of their childhood within the realm of marriage, and the vast majority of children appear to be born to stable couples rather than to single women. My estimates indicate that the high nonmarital birth rate in Iceland is mainly a consequence of women and men having children before marriage, but it does not signal any retreat from marriage; over a period of twenty years, the standardized marriage rates have instead remained remarkably stable.

Within a context such as the Icelandic one, where most children are born to unmarried mothers and cohabitation has been semi-regulated, marriage may have become a symbolic declaration or even a way to display social status. With increased age and responsibilities in terms of joint finances, housing and childrearing, it may be that couples pay more attention to things such as survivor’s pension rights and late-life security, which could act as an incentive to marry, and thus partially explain why marriage has been so stable over time. In any case, the evidence stemming from Iceland suggests that claims about marriage being a critically endangered social institution should be treated with caution.

¹ The probabilities in Figure 3 are the averages of the period 1994-2013. Apart from changes in age of first birth and first registration of cohabitation (stemming from postponement of parenthood), the estimates remained stable over the study period (Jónsson 2020, 2017).