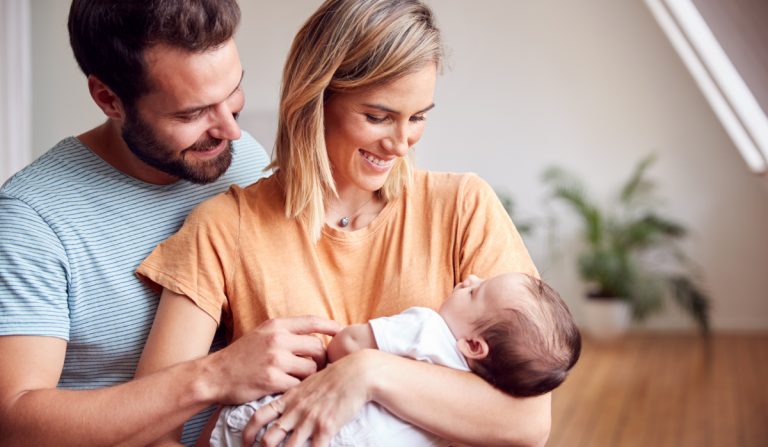 Individual characteristics of late parents have been extensively studied in demographic literature, but less is known about the parental couple. As Marie-Caroline Compans shows, looking at fathers and mothers separately, late first-time parents tend to be in a union with younger-than-customary partners. The implications of the two cases are not the same, however.

In France, as in the other European countries, late first births, while still a minority, have become more common. Here, I define the age threshold for “late” first motherhood as 35 years and over, and for “late” first fatherhood, as 38 years and over. Threshold ages are of course a bit arbitrary in these cases, but the impact of small adjustments is minor. Figure 1 displays the upward trend in late first births for both genders across generations, increasing from around 3% in the 1950–54 cohort to 6–7% in the 1965–70 cohort.

The socio-economic characteristics of late parents have already been highlighted in the literature: they often belong to well-educated groups and intermediate and higher occupational categories (Bessin et al., 2005). Late parents also have specific partnership histories, characterized by later ages at first cohabitation and by union dissolutions (Mikolai, 2017). However, beyond these individual features, little is known at the couple level. The age difference between partners, for instance, is of particular interest from the viewpoint of gender norms and relations between parents. So far, demographic research has focused on gendered age patterns at union formation (Beaujouan, 2011; Bozon, 1991), but this is rarely linked to fertility behaviours. The limited existing research indicates that among fertile couples across various high-income countries, the older the father, the younger the woman with whom they have their child; while the older the mother, the lower the average age gap with the father (Dudel et al., 2020).

I explore the parental age difference by comparing late first-time mothers and fathers with younger first-time parents based on the birth records in the 2016 French permanent demographic sample (EDP). Four characteristics should be noted:

In the following, the main results are given for all the birth cohorts together (from 1950 to 1970) since there is no clear trend across cohorts in the pattern of age-difference between partners.

The reproduction of gender imbalance among late first-time fathers

In general, the difference between the father’s age and the mother’s age is positive, but it is notably greater among late fathers than among younger fathers (7.7 years vs. 1.9 years; 38 years is my cut-off point, here). Indeed, it is much more frequent for late fathers to have a first birth with women who are at least four years younger (77%, vs. 28% for young fathers; Figure 2). Conversely, while one-third of young fathers have a first birth with a similarly-aged woman, this is rarely the case for older fathers (8%).

The singular age distribution of the partners of these late fathers may reflect the fact that female fecundity decreases with age, particularly from their 30s.The higher age difference between late fathers and their partners may partly result from selection: if both partners are in their 40s, for instance, having a child (and especially a first child) may become unlikely for biological reasons. However, women are still likely to conceive between 35 and 40 years of age (Leridon, 2004), which suggests that more than biology is at play here.

Let us consider a few possible mechanisms. For instance, if relatively older men meet women of comparable age who already have children and do not want any more, they will not have a child together, and so are not in my sample. However, irrespective of the occurrence of a birth, there is a general tendency for relatively older men to (re)partner with younger women (Beaujouan, 2011; Bozon, 1991), who, incidentally, are more likely to be childless, and may share their partner’s desire to start a family, which will eventually lead to the specific age-difference profile of late first-time fathers.

Regardless of the mechanism that led to the observed outcome, an older male partner is usually interpreted as an indication of male dominance within the couple (Beaujouan, 2011; Bozon, 1991). Thus, it appears that late first fathers tend to reproduce, and even accentuate, this traditional gender imbalance.

Women who became mothers before age 35 are, on average, 2.3 years younger than their partners, but this average age difference declines to 0.2 years among late first-time mothers. In fact, 34% of late mothers are at least two years older than their partner, which is rare among younger mothers (only 9%; Figure 2).

While men are less constrained than women, their fecundity also declines with age (Ramasamy et al., 2015). Therefore, as may happen for late fathers, the singular distribution of the age difference between partners may reflect selection into parenthood, as women with younger partners are more likely to conceive than those with an older partner. In addition to such biological factors, older male partners may also be less inclined to have a child, especially if they are already fathers. Moreover, irrespective of their fertility behaviours, women’s probability of (re)partnering decreases with age, but when they do, they tend to do so with men who are of similar age (Beaujouan, 2011; Bozon, 1991) or younger (Ní Bhrolcháin, 2005).

Although couples where the woman is older than the man are becoming more numerous, they remain a minority (Kolk, 2015). In 2011 in France, only 16% of women in a union were older than their male partner (Daguet, 2016). As Figure 2 shows, this proportion climbs to about 44% among late first-time mothers, who remain a small minority (6-7% of all first time mothers; Figure 1), but an interesting one, in that it deviates from traditional patterns of family formation, and, possibly, also from traditional gender roles within the couple.

To conclude, late first-time mothers and late first-time fathers show specific profiles in terms of the age difference with their partner, but these specificities probably have very different meanings in  terms of gender norms and relations. While late fatherhood seems to reproduce or even accentuate traditional gender imbalances, late motherhood is associated with a deviation from the still prevalent pattern of male dominance.

Leridon, H. (2004). Can assisted reproduction technology compensate for the natural decline in fertility with age? A model assessment. Human Reproduction, 19(7), 1548–1553.

Ní Bhrolcháin, M. (2005). The age difference at marriage in England and Wales: A century of patterns and trends. Population Trends, 120.