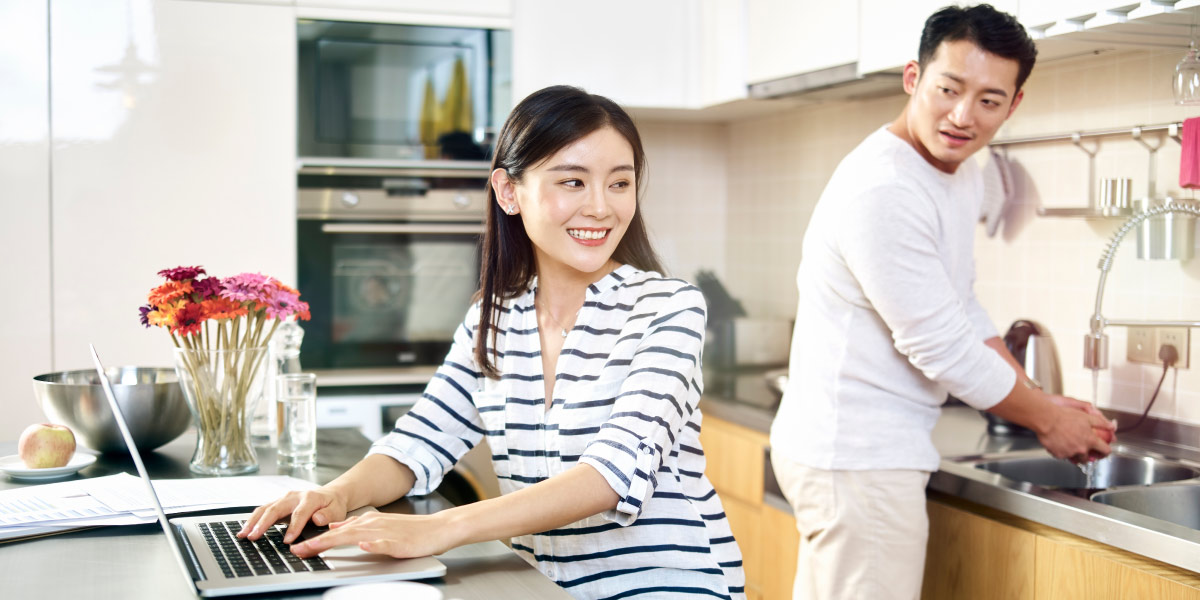 As female labour force participation continues to rise in Taiwan, more women are faced with the dual burden of employment and household responsibilities. Jolene Tan highlights the impact of a more equal division of labour on childbearing, as egalitarian couples are more likely to give birth than inegalitarian couples.

In most societies, women typically spend more time on domestic labour than men. Consequently, women bear the greater burden of balancing work and family duties as they become more engaged in paid employment. This conflict between work and family may increase their stress and decrease their desire for having children, resulting in lower overall fertility rates.

In Taiwan, with the increase in female labour force participation rates over the last two decades, fertility rates have declined (Figure 1). These trends reflect the first stage of the gender revolution in which progress in female education and employment outpaces progress in gender equity within households (Goldscheider, Bernhard & Lappegård 2015). This dual burden of paid labour and household responsibilities for women leads to lower fertility. Conversely, the second stage of the gender revolution, when the male contribution to domestic chores increases, easing the burden on women, can go hand in hand with a somewhat higher fertility rate.

In a recent study (Tan 2022), I investigated the impact of different configurations of paid and unpaid labour among couples on childbearing outcomes. I used data on 1,969 heterosexual, married or cohabiting couples with an average age of 31.1 years for female partners and 33.8 years for male partners at baseline. About 32% of the couples had no children when first observed, and 68% had children. The analysis controls for child parity and examines parity progression between observations. Given that the data come from a panel study (2003-2012), attrition may be an issue, as couples who dropped out of the study (488 couples) may have different characteristics from those who remained (1,969 couples). Indeed, the couples who dropped out are more likely to be younger, childless, dual earners with an equal division of labour, co-residing with their parents, not employing any domestic help, and residing in metropolitan areas. Given the association between the propensity of nonresponse and the observed data, full information maximum likelihood estimation was applied to account for the attrition.

Between 2003 and 2012, based on the nationally representative longitudinal survey, four main division of labour arrangements can be identified (Figure 2):

Division of labour arrangements and fertility

In the years 2003–2012, compared to couples who adopt the traditional male breadwinner arrangement, the odds of having a child are reduced by 28% for egalitarian dual-earner couples, 31% for inegalitarian dual-earner couples, and 47% for female-breadwinner couples. As the one-year lag between labour division and fertility may not be long enough for fertility to adapt, a two-year lag was also tested, leading basically to the same results (Figure 3). In the two-year lag model, the odds are reduced by 30%, 56% and 63%, respectively.

In short, among dual-earner couples, those with a more egalitarian division of labour are more likely to give birth compared to couples with a less egalitarian arrangement. The female breadwinner arrangement results in the lowest likelihood of childbearing. In fact, the fertility of full-time working women is probably even lower than it seems here, where I focused on couples, and on lasting ones on top of that. If women who are financially independent are less willing than others to form a partnership, or to remain partnered, they are not well represented in this panel, and their fertility is presumably very low, if not zero.

Making a case for the second gender revolution

While the male breadwinner arrangement leads to the highest likelihood of childbearing, it is important to improve gender equity in household responsibilities as the percentage of dual-earner families continues to rise. Taiwan has made great strides towards the first half of the gender revolution by welcoming women into the workplace, but it is now important to complete the second half of the revolution, improving women’s position in both the private and public spheres. More significant household contributions by men will not only alleviate women’s dual burden, they can also foster greater connection to the family and facilitate childbearing.