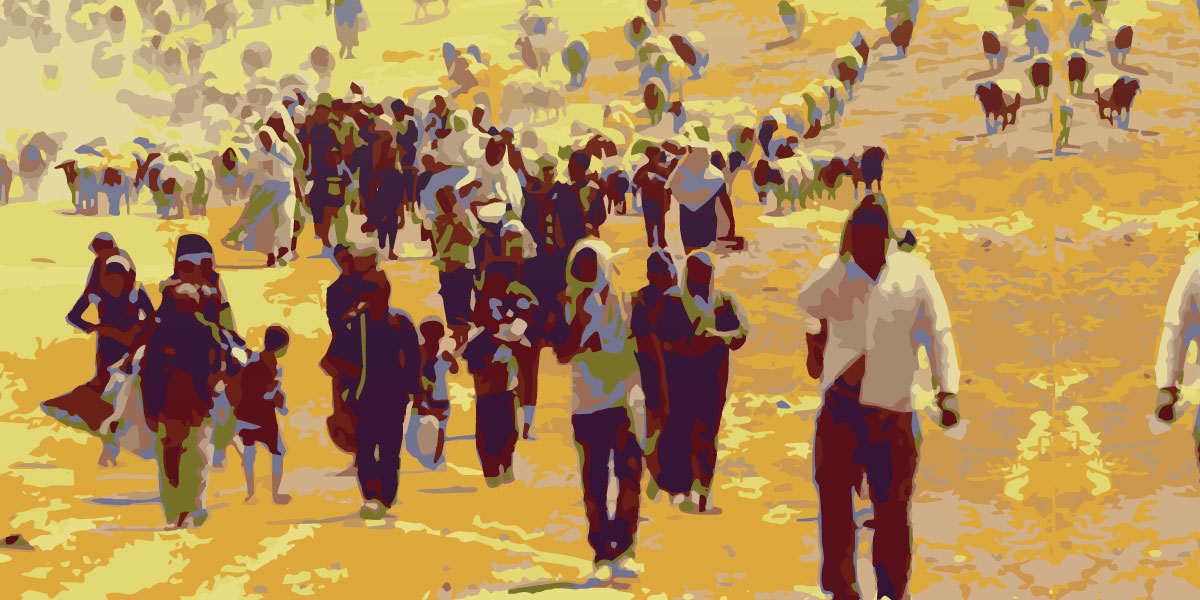 A UN Independent International Commission of Inquiry has determined that ISIS acts against the Yazidi religious minority of Sinjar constitute a case of ongoing genocide (OHCR 2016). While ISIS’s intent to destroy the Yazidi community has been ascertained, the extent of killings and kidnappings of Yazidis and the demographics of those targeted have long remained unclear. Some attempts have been made by local authorities and human rights organisations to compile lists of victims, but the UN has not yet been able to independently verify the reported figures (UNAMI/OHCHR 2016).

The ISIS attack on Sinjar in August 2014

During the summer of 2014, ISIS took over Nineveh governorate in northern Iraq, home to most of Iraq’s minority groups. These minorities were systematically targeted by ISIS in a violent campaign to ‘purify’ the region of non-Islamic influences. The Yazidi community in the area of Mount Sinjar, consisting of approximately 400,000 people, was singled out for particularly brutal treatment.

On 3 August 2014, ISIS launched a coordinated attack on Sinjar City and surrounding towns and villages, forcing the Yazidis to seek refuge on Mount Sinjar. Those who could not flee in time were either killed or kidnapped. As ISIS encircled the mountain on 4 August, tens of thousands of Yazidis remained trapped without water, food or shelters in temperatures rising above 50ºC. US airstrikes and humanitarian aid airdrops began on 8 August. Most Yazidis were evacuated between 9-13 August when a safe corridor was opened by Kurdish forces, allowing them to flee through Syria into the Kurdistan Region of Iraq (Fig 1).

Evidence from a retrospective household survey

Almost 3 years after the ISIS attack on Sinjar, the vast majority of Yazidis remain displaced in the Kurdistan Region of Iraq. In a recent paper, we presented the findings from a retrospective household survey that we conducted in November and December 2015 to estimate the number and demographic profile of Yazidis killed and kidnapped by ISIS (Cetorelli et al. 2017).

Our survey covered the displaced Yazidi population from Sinjar sheltered in camps in the Kurdistan Region of Iraq. We interviewed a systematic random sample of 1,300 in-camp households and recorded information about killings and kidnappings of household members by ISIS. Verbal informed consent was obtained from all interviewees after explaining the purpose of the survey, its confidentiality and the voluntary nature of participation.

Using these data, we estimated that 9,900 (95% confidence interval (CI): 7,000 – 13,900) Yazidis were either killed or kidnapped over the course of a few days in August 2014, amounting to roughly 2.5% of the entire Yazidi population of Sinjar at the time of the attack. Of this total, an estimated 3,100 (95% CI: 2,100 – 4,400) were killed, with nearly half of them executed by gunshot, beheading or being burned alive, while the rest died from lack of water and food or injuries during the ISIS siege on Mount Sinjar. An estimated 6,800 (95% CI: 4,200 – 10,800) were kidnapped, with over one third still missing at the time of the survey. Escapees recounted the abuses they had suffered, including forced religious conversion, torture and sex slavery (Fig 2).

Nearly 1% of the nuclear families in our sample had all members either killed or kidnapped, but were reported in the survey because at least one family member managed to escape ISIS captivity. This suggests that our analysis may have underestimated the actual toll of killings and kidnappings because of the unknown number of families who were still in captivity or had died in their entirety with no one surviving to report.

The Yazidis were likely to be killed and kidnapped by ISIS irrespective of age and sex, but we found that children under 15 years were disproportionately affected. Children accounted for nearly all those who died on Mount Sinjar during the ISIS siege, and were also much less likely to escape captivity following kidnapping compared to adults. Several accounts confirm that girls were sold or gifted to ISIS fighters, while boys were forced into ISIS training (Fig 3).

Our survey has a number of limitations, including inference from a sample of displaced households to the whole Yazidi population of Sinjar, and uncertainty of that population’s exact size at the time of the attack. Nevertheless, our estimates are consistent with other existing evidence, including the lists compiled by local authorities and human rights organisations. According to those lists, the number of Yazidis killed is between 2,500 and 5,000 and the number of those kidnapped is over 6,000. The fact that multiple independent sources arrived at similar estimates increases our confidence in the general findings.

Combined with other existing evidence, our survey can support a formal genocide investigation by an appointed judicial authority, and highlights the need for the international community to keep attention focused on the rescue, assistance and protection of the Yazidi community.

UNAMI/OHCHR (2016) A Call for Accountability and Protection: Yezidi Survivors of Atrocities Committed by ISIL. UNAMI/OHCHR Report.