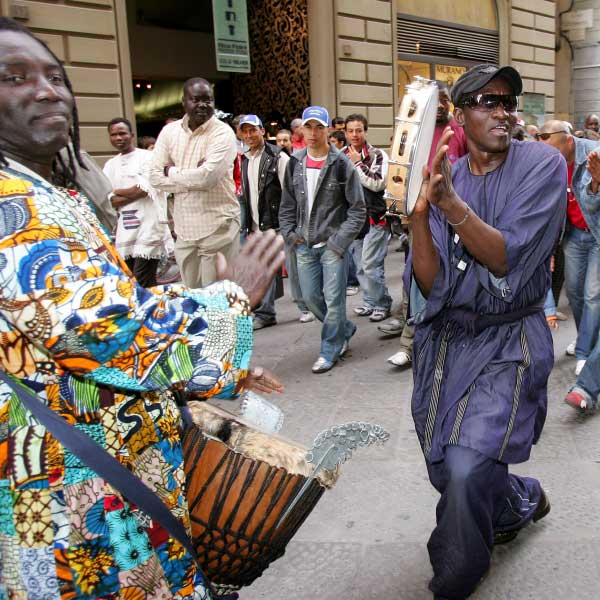 Can cultural distance hinder the integration of foreigners? The answer would be easier if we knew what cultural distance is. Gustavo De Santis, Mauro Maltagliati and Alessandra Petrucci try to measure it in Italy, with an original method. Despite the scarcity of good empirical indicators, three results seem to emerge: 1) within all groups, Italians included, heterogeneity is large; 2) foreigners from different countries differ among themselves and 3) a long stay in Italy seems to favour cultural convergence.

Cultural distances are frequently evoked, especially by researchers who need to justify what their models cannot explain, but they are very hard to define and measure. When it comes to groups (in our case national groups: Italians and foreigners of various nationalities living in Italy) the very notion of cultural distance may be based on the false assumption of internal homogeneity.

Not very clear, is it? OK, let us try with an example. Consider Figure 1 and assume that the five cultural clusters ‘make sense’, i.e. that they correctly identify five different cultural typologies. Note that we ignore the cultural characteristics of each of these typologies, and we do not need to know them, at least initially. On the y axis we read proportions: among Italians (from the South and from the two main Islands) about 30% of respondents are of type A, ~25% are of type B, … and ~17% are of type E. As the proportions are approximately the same in the two cases, we conclude that the two groups of Italians are very similar, although not internally homogeneous.

Conversely, the Chinese living in Italy have a markedly distinct distribution of individuals across typologies: only about 4% are of type A, ~28% of type B, … and as many as ~45% of type E. Muslims (a short term for immigrants ‒ of unknown religion ‒ from predominantly Muslim countries) appear to be somewhere in-between, although in their case the share of typologies B (~30%) and C (~31%) is larger than in other instances.

Two things emerge from this analysis.

This is the approach that we followed in a recent paper, with data taken from two similar ISTAT surveys conducted in Italy between 2011 and 2013, the latter covering the general population, the former focused on foreigners (De Santis, Maltagliati and Petrucci, 2021).

The main results of our analysis are displayed in Figure 2, which uses proportions (those of Figure 1, but for all groups) to calculate (Euclidean) distances, and then (with little loss of information, i.e. little distortion) forces these distances to appear on a Cartesian plane.

Italians form a homogeneous group, relatively speaking. However, within Italy, a clear north-to-south gradient appears. Northern Italians are culturally closer to immigrants from neighbouring European countries (France, Germany, and North-Central Europe). Southern Italians, instead, appear closer to other nationalities, starting with those around the Mediterranean Basin.

Some countries from homogeneous regions are highlighted, such as those from Latin America, or from the Indian peninsula. The fact that they are close, in Figure 2, means that their members have a comparable distribution among the five cultural typologies mentioned at the beginning.

The Chinese living in Italy are the culturally farthest immigrant group, according to our estimates, an outcome that conforms to expectations and to other sources (e.g. ISTAT 2020).

Finally, people of foreign origin, but who later acquired the Italian nationality (labelled ‘IT2’), lie somewhere in-between: they are somewhat detached from Italians with Italian origin, but they are closer to them than any other foreign group living in Italy.

What lies behind (or better, inside) our clusters

The construction of our five clusters is based on the 11 empirical indicators listed in Figure 3: how often certain ‘objects’ are used (e.g. personal computers), or certain activities are carried out (reading books, attending concerts, etc.) or politics is discussed. Admittedly, it is not culture proper that is being evaluated here: rather, it is the use of (free) time, which is influenced by culture but also by several other factors that we cannot control for (e.g. personal resources). Our indicators are less than ideal, we admit, but this is as far as we could go if we wanted to merge the two ISTAT surveys that were needed to compare foreigners (ISTAT 2016a) with Italians (ISTAT 2016b).

Figure 3 gives an idea of the main characteristics of the members within each cluster. For example, the members of cluster C (Secluded from the social world, if we want to label them) do few or none of the listed activities, similar in this respect to the members of cluster B (Semi-secluded), who are just slightly more active when it comes to dancing, or reading newspapers and magazines. (This was the case of immigrants from predominantly Islamic countries, remember?)

In cluster E (Surfers) we find individuals who frequently use PCs and surf the internet, go to the cinema, or to concerts (all types of live music) and go dancing, but who never talk about politics (as is the case for the Chinese, in Figure 1). The members of cluster A (Active) are quite or very active in all the activities indicated, and they also talk a lot about politics: many Italians are like that (see again Figure 1). Finally, there are the members of group D, the Committed: they talk a lot about politics, keep themselves decently informed, and disdain certain facets of modernity, such as PC, internet and discos.

However, one point should be emphasized: in any national group, there are individuals of all clusters (that is, of all typologies, which seems inconsistent with such notions as ‘national homogeneity’, ‘typical traits’, and so on: what changes is (merely?) the relative frequency of the various typologies.

What do we learn from all this?

First, we must caution readers against hasty interpretation. We refer them to the original article for the limitations of our findings, in terms, for instance, of available empirical indicators to assess the ‘cultural orientation’ of our respondents, clustering criteria, and impossibility of controlling for certain covariates (age, sex, education, income, etc.; De Santis, Maltagliati and Petrucci, 2021).

Also, we do not have any empirical indication of how time and selection influence our results. For instance, let us consider people of foreign origin who are now Italians. Acquiring the Italian nationality is a long and painful process. Therefore the ‘IT2’ group has, on average, a longer period of permanent stay in the country than any other group. The fact that they are culturally closer to Italians than all others may be interpreted in two main ways:

Either way, cultural distances do not seem to be insurmountable obstacles when it comes to integrating foreigners in a host country. And, in all cases, those who evoke them can now start to measure them (if empirical data permit, of course).