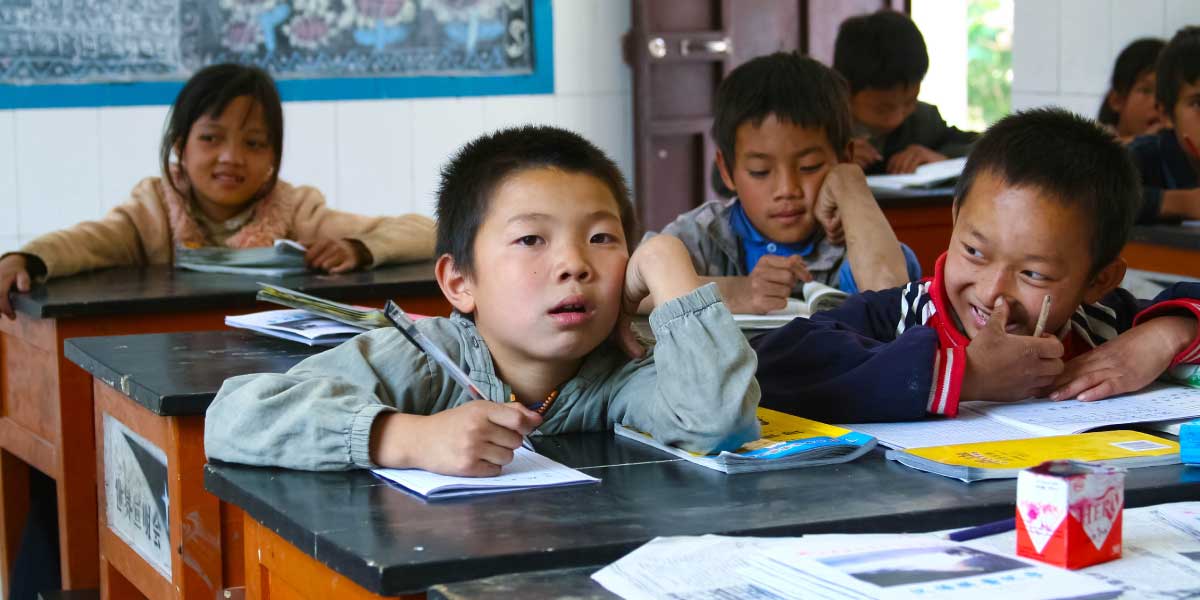 Massive internal migration in China has led to a rise in the population of migrant children. Yuanfei Li, Zai Liang and Zhongshan Yue examine schooling choices for migrant children in urban China and find that they still face significant obstacles in accessing public schools, with (illegal) extra fees often being imposed upon their parents.

Before China’s transition to a market-oriented economy in the late 1970s, internal migration was strictly controlled by a hukou system (household registration system). As a result, migration within China was minimal and urbanization low. However, during the last few decades, urbanization in China has developed at an unprecedented pace: the percentage urban rose from less than 18% in 1978, to more than 57% in 2016 (Figure 1).

This trend has been driven mainly by massive internal migration following the relaxation of restrictive migration policies, and China’s reform and opening-up in the late 1970s (Liang, Van Luong, and Chen 2008). More than 100 million children are affected by internal migration in contemporary China. The majority are the so-called left-behind children (looked after by relatives in rural areas while their parents move to the city), but more than a third are migrant children who move with their parents (Duan et al. 2013). Although recent changes in government policies have improved educational opportunities for migrant children (Table 1), their choices in the city are still limited in subtle ways. Using data from a nationally representative survey, in a recent study we examined the continuing challenges faced by migrant families in getting their children (aged 6-12) enrolled in urban public schools (Liang et al. 2020).

For public school education, children’s opportunities in Chinese cities are closely related to their hukou status. Migrant children, who lack a local hukou in destination cities, are not on an equal footing with their resident peers. Since the late 1980s and early 1990s, many migrant parents have had to pay large amounts of money for “education endorsement fees” to local public schools in order to enroll their children. While changes in education policy eventually banned such practices (in 2004), there are still schools that charge extra money to migrant parents.

As a result, many migrant families, especially the most socioeconomically disadvantaged ones, have no choice but to register their children in schools for migrant children organized by migrant parents or migrant entrepreneurs. Their affordable tuition, flexible payment schedule, and physical proximity make these migrant schools very attractive to migrant families. However, they often have poor infrastructure and less qualified teachers, and in some cases they do not even meet safety standards, so are exposed to the risk of government intervention and shutdown. As such, migrant children attending these schools face multiple uncertainties and their education may suffer in the long run.

Private schools are a third, and better, option but as is the case in most developed countries, they often charge very high tuition fees and are thus out of reach for ordinary migrant families. Overall, like their local counterparts, most migrant parents would prefer to enroll their children in local public schools. Given the more favorable outcomes for migrant children attending public schools (versus migrant schools), education policies also now require city government to accommodate migrant children’s education in the local public education system.

We examined two questions related to migrant children’s education using data from the 2012 China National Migration Population Dynamics Monitoring Survey and findings from our fieldwork in selected cities in China:

1) Do migrant parents enroll their children in public or migrant schools?

2) Do migrant parents pay any fees for public school enrollment?

As shown in Table 2, the majority of migrant children are enrolled in local public schools, but a non-negligible share (6.8%) are still attending special migrant schools. Despite government policy explicitly prohibiting public schools from charging enrollment fees, about 20% of migrant families paid such fees in 2012. While adaptation in the destination city can help migrant families navigate the local public school system, our fieldwork shows that they also face other more subtle hurdles. Even though some migrant families can afford to get their children enrolled, they often have to rely on some special “social capital” to do so. In nearly all cases, migrant parents have to find a “broker” , often a local resident, to make contact with school officials and facilitate the enrollment of their child in a public school.

Moreover, we also find significant differences across regions. Compared to children moving to other parts of China, migrant children residing in eastern China, which is more socioeconomically developed, are less likely to be enrolled in public schools and, when they are, their parents are more likely to pay for their education. However paradoxical these patterns may seem at first glance, they actually reflect a sad reality: large cities in eastern China, especially Beijing and Shanghai, are ignoring policies ensuring equality of educational opportunity and have begun to use a new strategy to control and discourage immigration.

Apart from these findings, there are other major concerns for both scholars and policy makers. For instance, among all the 6 to 12-year-old migrant children in our study, around 11% were not enrolled in school when the survey was conducted. While this could be due to disruption during initial settlement of migrant children, especially for the youngest among them, it also shows that more effort is needed to grant these children the same educational opportunities as their urban (resident) peers.