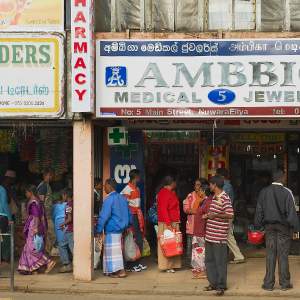 The present world population of 7.3 billion is projected to increase to 8.5 billion or more by 2030, with almost 90 percent of the increase occurring in the developing countries, which are already struggling to improve overwhelming issues such as severe poverty. In the context of the developing world, Sri Lanka has a favourable population growth, but several challenging issues remain to be faced.

At present (2015), the population of Sri Lanka stands at 20.5 million. The rate of growth, below 1 per cent per annum, is the lowest among South Asian countries, but still high in absolute terms; there may be as many as 23 million Sri Lankans by 2030. Sri Lanka had a high population density of 336 persons per square kilometer in 2015 having increased from 230 in 1981. The projected increase in population is a challenge to policy makers wanting to upgrade the socio-economic conditions of the country – for instance, reducing poverty from its current level of 6.7. per cent.
Other basic needs such as education, health, shelter and food also need to be well planned in order to advance the quality of life of the people of Sri Lanka in years to come.
As shown in Table 1, the shift in the age structure in the past 100 years has been substantial. Thevery young population of the past has evolved into one where the working ages form the bulk, while the old age groups are already on the increase, and will continue to be so in the future.

The opening of this demographic window of opportunity (or “demographic dividend”) potentially is conducive to economic development for the next one and a half decades – more or less until 2030. But will it be used to achieve sustainable development? Up to now, the socio-economic policies and programmes implemented in Sri Lanka have been modest, to say the least. New employment avenues, programmes and policies have to be implemented, with special consideration for the educated but unemployed youth. It is they who must be “empowered”, it is their potential which must be transformed into good jobs, and income, if we want this “demographic bonus” to transform into actual economic development.

Ageing is looming in Sri Lanka, too

The policy makers as well as the society should also plan now to improve the wellbeing of the ageing population. The number of persons aged 60 years and over has doubled in relative terms, from 6.6 per cent in 1981 to 12.4 percent in 2012 – and this trend will continue for several years into the future. As is the case almost everywhere in the world, the older population is predominantly made up of women (79 males for every 100 females), due to higher female life expectancy: currently 76 years, as against a life expectancy of 72 years for men. This female older population is vulnerable due to widowhood and income scarcity, thus warranting more attention towards their health and well-being.

The theme of this year’s (2015) World Population Day, “Vulnerable Population in Emergencies”, emphasizes the need for careful consideration of all vulnerable groups. Sri Lanka has several of these.