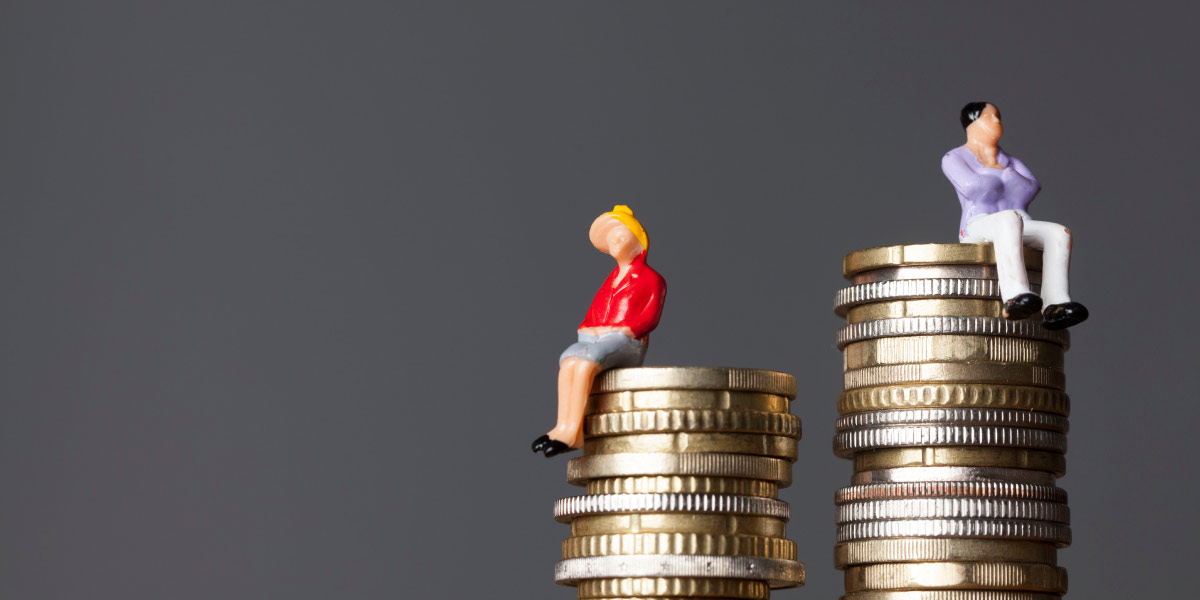 Women tend to earn less than their male partners, all over the world. André Grow and Jan Van Bavel show that this can easily be explained by combining the unequal distribution of labour income by gender with the (likely) tendency to prefer partners with high incomes. Economic equality within couples cannot be achieved in unequal societies.

Gender equality has made great progress since the 1950s: women have caught up with men in education, they have conquered previously male-dominated industries and occupations, and they are on increasingly equal footing with men in the unions they form. However, there are still some clear gender differences in families, such as men’s greater contribution to the household income. Figure 1 illustrates this impressively: the relative income distribution initially increases, from the point where women contribute almost nothing to the common household income up to the point where women and men contribute about the same. But after this 50:50 point, the curve steeply decreases. So, while there are plenty of partnerships where the woman earns less than, or about as much as, her partner, there are very few couples where the woman earns more. This pattern persists, even though women’s gains in educational attainment relative to men have somewhat reduced their income disadvantage (Klesment and Van Bavel 2017).

An explanation for this income “cliff” seems to be obvious: a couple in which the woman earns more than her partner violates social norms that hold that a man should be the main provider for his family. In a recent study, we suggest that there might be another reason for the glass ceiling in women’s contributions to household income (Grow and Van Bavel 2020). We argue that the cliff can also be attributed to the different income levels of men and women. After all, women still earn significantly less than men. Figure 2 shows this in some detail: Women’s average income is lower than men’s, and women’s income distribution tends to be heavier on the left-hand side. This means that, typically, there are more women than men who earn comparatively little. At the same time, there are many more men than women in the highest income categories. If one now assumes that both men and women prefer partners with high income over partners with low income, it becomes clear that this difference in men’s and women’s incomes may contribute to the income cliff. A simple thought experiment helps illustrating this.

Imagine a man who ranks high in the male income distribution. Given his income, he will be in a good position to compete for women who rank high in the female income distribution. Yet, while there might be women who earn as much as, or even more than, he does, these are relatively few. He will therefore most likely have to ‘settle’ for a woman who earns less than he does. Imagine now a woman who ranks high in the female income distribution. In contrast to our high-ranking man, she will have to ‘settle’ less often for a lower-income partner, as there are relatively many men who earn more than she does. These differences in men’s and women’s partnering opportunities are likely to not only create a right skew in the distribution of women’s contribution to household income, but also a ‘cliff’ close to the 50/50 point.

A rigorous assessment of our thought experiment

To assess the logical consistency of our argument more rigorously, we carried out a simulation experiment. Put simply, we took the income data of 25- to 45-year-old men and women from 27 different European countries and sent these data points to a virtual marriage market. When looking for a partner, the virtual men and women were rather materialistic: they had the task of looking for a partner with the highest possible income, while neglecting other factors that might affect partnering decisions in real life. A key feature of our simulations is that the artificial individuals had only incomplete information about the marriage market at their disposal. That is, rather than having a complete list of all the available partner alternatives (and of their income), they had to engage in an active search, in which they sampled from the pool of opposite-sex members one-by-one. Whenever they encountered an opposite-sex member, they needed to decide whether they wanted to start dating, and later maybe marry, him or her. Before actually marrying, they could continue their search and ‘trade-up’ for somebody who earned more than their current date, if this alternative was also willing to date them. Furthermore, we programmed them to be more reluctant to marry somebody who earned less than they did, than to marry somebody who earned as much as, or more than, they did. This applied to men and women in equal measure.

While the model is obviously a simplification of how partner search occurs in real life, the results that it generates are surprisingly similar to the real patterns in many countries (see Fig. 3). Just as observed empirically, the model generates many couples in which the woman earns about as much as, but not more than, her partner, and it creates a cliff at the 50:50 point.

Of course, our experiment is a minimal simulation in which many aspects of real marriage markets are ignored, e.g. the tax system or the social environment. Such aspects could explain some differences between the empirical data and model outcomes. Germany is a case in point. In the empirical data, there are many more partnerships in which women provide 25 to 50 percent of the household income than our model generates. One reason for this might be the German tax code, that rewards combinations of very low and very high incomes within marriages.

Our work should not be understood as evidence that social norms play no role at all in people’s marriage decisions. Rather, our study shows that such norms are not strictly necessary to explain the gender cliff in the relative income distribution. Even more, our results suggest that as long as women’s average income is lower than men’s, the trend towards more egalitarian gender attitudes that has occurred in Western countries over last decades might not be enough to achieve complete equality within families. Rather, in line with Goldin’s (2014) reasoning, the ‘last chapter of the grand gender convergence’ also requires institutional change aimed at reducing the gender pay gap, as this will create the structural conditions that are necessary to attain more equality within families.

Grow, A., & Van Bavel, J. (2020). The gender cliff in the relative contribution to the household income: Insights from modelling marriage markets in 27 European countries. European Journal of Population, (online first).