In the United States, mortality rates differ across racial and ethnic groups. Although the gap in life expectancy between non-Hispanic blacks and non-Hispanic whites (blacks and whites, hereafter) has been declining, whites still lived on average 3.8 years longer than blacks (78.1 vs. 74.3 years) in 2010.
The mortality regime of blacks and whites does not differ only in terms of life expectancy, but also in terms of lifespan variability. In fact, lifespans are both shorter and more variable for blacks than for whites. Such greater lifespan variability translates to greater uncertainty about age at death, which can induce individuals to discount their future more, for instance by reducing the value of investments in education and in health, or by undermining incentives for retirement planning.

We first start by looking at the black-white gap in life expectancy using the new age-incidence decomposition method (Firebaugh et al. 2014a). Lower life expectancy for blacks can be generated by two different mechanisms: one, blacks can be more likely to die of causes that tend to strike at younger ages such as homicide or traffic accidents; two, blacks can die of the same causes as whites, but their average age at death is lower. We call these two mechanisms incidence component and age component, respectively. We find that in 2010 nearly 84% of the 3.8 year black-white life expectancy gap is accounted for by the age component. That is, blacks and whites die of the same causes, but blacks do so at younger ages. The other 16% is accounted for by the incidence component where blacks are more likely to die of causes that strike on average at younger ages. Despite the fact that blacks are disproportionally more likely to die of homicides, the incident component is relatively small because some youthful causes of deaths are more common among whites (e.g., suicide and accidental poisoning) and they offset the effect of homicide among blacks. 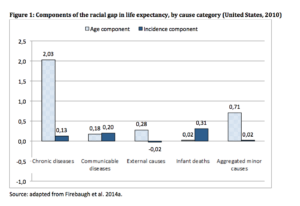 Figure 1 illustrates the age and incidence components for five major causes of death. The age effect is preponderant for chronic diseases, external causes, and minor causes. On the other hand, communicable diseases and infant deaths contribute to the racial gap in life expectancy mainly through the incidence component, with blacks being more likely to die of these causes than whites.

Including almost 70% of all deaths, chronic diseases such as heart diseases, cancers, and cerebrovascular diseases are the most common causes of death. Therefore, it is of no surprise that they account for most of the black-white gap in life expectancy, about 56%. However, there are also some rare causes of death that contribute more to the racial gap than some common causes of death. For example, homicide accounts for more of the racial gap in life expectancy than cancer, even though blacks are about 17 times more likely, and whites about 120 times more likely, to be cancer victims than homicide victims. Other causes that “over-contribute” to the racial gap are HIV/AIDS, perinatal deaths, and Alzheimer’s. Differently from all other causes of death, suicide and accidental poisoning stand out because they narrow the racial gap. Even though most of the black-white gap in life expectancy is generated by differences in age at death (age component), the incidence component is prevalent for the major over-contributors (i.e., homicide, HIV/AIDS, perinatal deaths, and Alzheimer’s) as well as for the causes that narrow the gap (i.e., suicide and accidental poisoning). In fact, for these (relatively minor) causes of death, blacks and whites do not differ much in terms of average age at death, but they do differ significantly in terms of incidence, or probability of dying of these causes.

Two populations with similar mean age at death can exhibit very different variability around that mean. This lifespan variability can be decomposed using the new spread-allocation-timing decomposition method (Nau and Firebaugh 2012), which reveals which causes of death, and which variance components of those causes, are most important for producing differences in lifespan variance between two populations. In the United States, as mentioned earlier, lifespans are more variables for blacks than for whites. This can occur through three different mechanisms: (1) because age at death varies more for blacks than for whites within the same cause of death (spread effect); (2) because blacks die of different causes than whites (allocation effect); (3) because the average age at death varies more across causes for blacks than for whites (timing effect). These mechanisms are visualized in Figure 2. 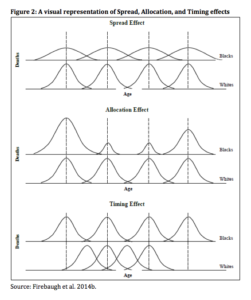 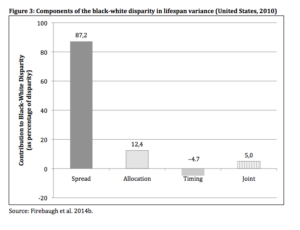 Using two new decomposition methods, we have analyzed the factors generating these disparities. We find that there are complex, sometimes offsetting, mechanisms that perpetuate the black-white mortality disparities. By highlighting these specific mechanisms, we provide evidence for designing more effective and targeted public policy prevention and intervention to achieve the goal of eliminating racial disparities in health in the United States.

[1] The joint component captures the part of the racial difference in lifespan variance that is attributable to simultaneous racial differences in incidence and in cause-specific variances.