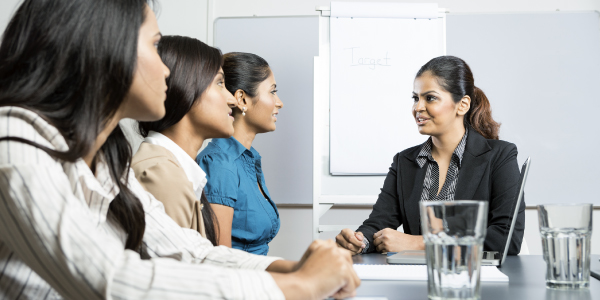 If there is one gender issue that has mainstream America rightly roiled up today, it has to do with women and work, or more specifically, women at work. Never-ending reports in the academic as well as popular press sum up the interconnected frustrations underlying this agitation. What they all point to is a large and growing disenchantment with both the idea and the reality of women in the workplace.

Women’s work in America and India

For example, in her much-reviewed recent book, Unfinished Business: Women Men Work Family, Anne-Marie Slaughter confronts the ugly fact that the modern American workplace is not a very pleasant environment for employees: Slaughter uses the word “toxic” to describe it, and she concludes that it is particularly venomous to women, especially to women with young children or aged parents to care for.

Nor does the home environment make life easier for the American working woman. As the latest data from the American Time Use Survey  lay out, the gender gap in time spent on housework refuses to go away. Yet, even when it does appear to be closing, there seems to be something skewed about the reporting: according to a recent Pew Foundation survey, men seem to think they are doing more housework than their wives think their husbands are doing!

And there is no shortage in the press of first-hand “human interest” accounts that lament the inexcusably poor supports for young mothers. These non-existent supports make a mockery of the idea of women’s economic empowerment, which is embedded in the abstract valorization of women’s work.

Taken altogether and adding to them the huge number of sympathetic reader responses that articles on this subject generate, one might think that women should be forgiven for not really wanting to keep up the grind of combining a home and a career, especially when the career itself is not really going anywhere.

Given this disenchantment and the open acknowledgment that women really cannot “have it all”, there is a vast irony taking place in other parts of the world: in those countries where economic and social development still have a long way to go (i.e., countries which are now the focus of the United Nations’ Sustainable Development Goals, SDGs), increasing women’s employment is the major and perhaps central objective of a slew of direct or indirect initiatives for achieving gender equality.

For example, India in recent years has been the source of much disappointment and impatience, because not only have female labor force participation rates not risen in tandem with the country’s remarkable economic growth over recent decades, but female work participation has actually declined. This decline has set off a predictable ideological debate in the country, centered on whether it reflects the fact that there has not actually been much economic growth or whether this growth has “merely” not been friendly enough to women.

If there is any agreement, it is on the conviction that there is something drastically wrong here and that India must make a harder push for gender equality in employment. Most of this agreement rests on India-specific variants of more global arguments in favor of women’s employment. The three most common of these global arguments, described below, all have noteworthy features, but they also fall short in important ways. Specifically, they fail to convince us of any need to pressure greater numbers of low- or even middle-income Indian women to march out into the workplace.

Three (not so compelling) reasons for urging Indian women to work

First, there is the economic rationale for getting many more women into the labor force, come what may. A much publicized report from the IMF, for example, calculates that eliminating the gender gap in Indian employment would boost the country’s GDP by a whopping 27% . The corresponding figures for the US and Japan are also high, at 5% and 9%, respectively.

But this is plainly an overstatement. Some of this apparently foregone economic benefit is notional rather than actual. It stems from the convention which measures productivity and work in terms of wages and income. Thus, GDP statistics do not take into account the several hours of unpaid labor that women (both working and non-working) perform on activities that would cost a lot of money if someone else were paid to do them. So if two unemployed women merely exchanged their housekeeping duties and paid one another for these services, a country’s GDP would rise by the conventional measure just by the fact that each woman was stepping out of her home to clean her neighbor’s kitchen instead of her own, or because she was looking after her friend’s young child instead of her own.

But this is not the same as saying that actual productivity has risen as a result of the switch.

One can get the same outcome (higher GDP) by changing the method of calculating national income in such a way that it takes into account the unpaid work that women do. One estimate for the US, for example, calculated that the nominal GDP in 2010 would be 26% higher than what was recorded if the value of non-paid household production were included. This change in GDP would be even higher in poor countries, given the amount of unpaid labor women dedicate to everyday tasks like fetching water and fuel.

The second widely peddled reason to encourage gender equality in employment levels is that “jobs are empowering, enlightening, liberating and interesting”. It is true that immersion in work, irrespective of its monetary returns, is often any one or more of these things. But even in the advanced economies of the industrialized world, few wage or salaried workers (and even fewer female wage or salaried workers) feel this way about their work. The sad truth is that much work tends to be monotonous, stifling and restricting for those not at the top or near the top of their professions. It is no wonder that, both within countries as well as between counties, there is a U-shaped relationship between levels of development and female labor force participation.

The base of this U consists of many women who have opted to forgo or leave the labor force precisely because most kinds of low-level work are so unattractive. It is poverty and other kinds of social or economic constraints that keep the women on the left arm of the U in the labor force. As soon as these pressures relent – for example, upon marrying a man with a stable income or through some other improvement in the family’s economic circumstances – many women would rather give up the luxury of more material consumption in exchange for the apparent luxury of not needing to take a backbreaking job, as such a job would also add to their frustration from managing housework and childcare. This frustration is compounded by the fact that they must bear these household tasks without male help, without the help of any extended family (as urbanization and modernization make families increasingly nuclear), and without the easy availability of paid help – precisely because paid help has also benefited from the country’s economic growth and decided to stop slaving for mistresses who are demanding and hard-nosed. In my own field of research on domestic servants in Delhi, not one of them wanted her daughter to have to take on this (or often, for that matter, any) job.

The third reason to push for higher levels of female employment points out the scores of studies that show women’s income is more likely to be used for family welfare (the health and nutrition of children, for example) than would the equivalent income earned by men. As a response to this justification for dragging women into low quality jobs, one can only say: in that case, men need to become more responsible with their incomes. Barring that possibility, perhaps public policy might alleviate this disparity by compulsorily depositing half the men’s income into their wives’ accounts or by enacting other policies (particularly in poor countries) that do not put so much of the onus for family welfare on wives and mothers. This would also probably make women more attracted to work –so long as the money they earned was not expected to only be used altruistically. In my own field work in India, I was always surprised by the number of poor women who laughingly told me that they would love to work in order to have money for going out to a movie or for buying that nice red sari they had seen in a shop window.

Employment is not (necessarily) empowerment

But gender equality in empowerment means giving women (and men) the right and the ability to choose if, when and where to enter the workforce and when to call it a day. Yet, they can only do this if they have the social security support for basic survival (food, health care, education and shelter) and as long as they are willing to voluntarily forego the further material goods that increased incomes would allow them to afford. There is nothing wrong with valuing the time, space and reduced stress that is lacking in the mad scramble of the working woman’s lot – even in a country as advanced as the United States.

What is more, considering how more and more people these days are seeking win-win solutions to climate change, it is possible that a slower pace of life will slow down global warming as well.