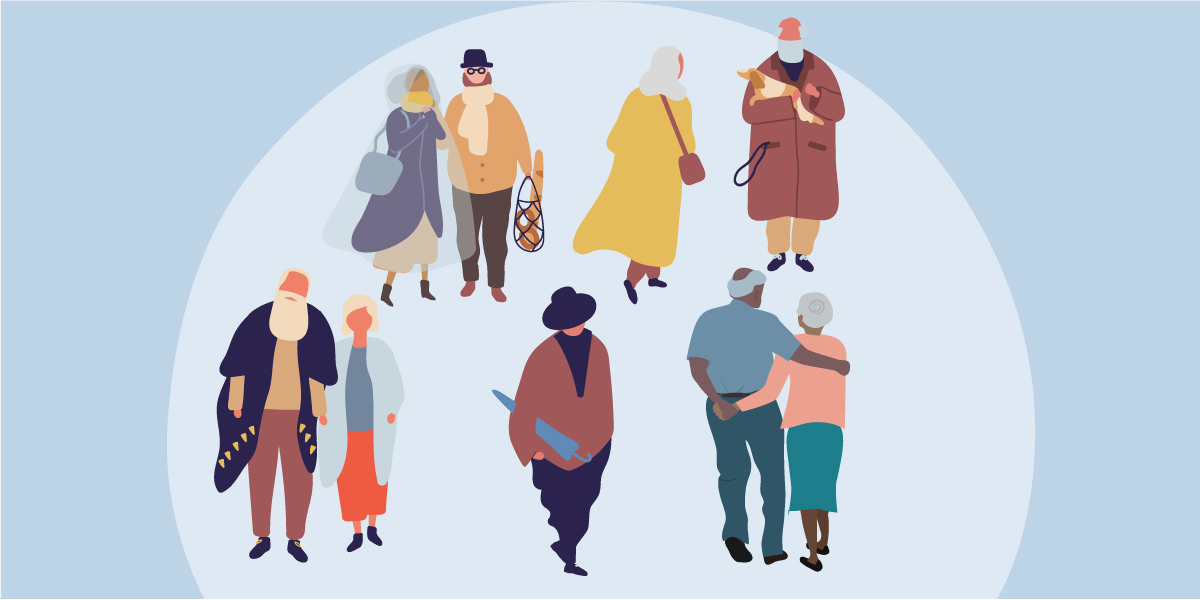 In a context of population ageing, understanding how to improve the wellbeing of older people has become one of the most important societal challenges. It is not simply a matter of living longer but also better, what the World Health Organization refers to as adding “life to years” (WHO 2012). Many terms encapsulate this notion of “ageing well”, such as successful, active and healthy ageing, all of which acknowledge the need to look beyond physical health. For example, Rowe and Kahn (1997) define successful ageing as “avoidance of disease and disability, maintenance of high physical and cognitive function, and sustained engagement in social and productive activities”.

Research on ageing is often conducted in a strictly medical perspective, ignoring the broader social and institutional context, family and social networks. CREW’s objective, instead, was to broaden the picture, focusing on a few important dimensions of successful ageing: participation in society, especially through work and caregiving, health and wellbeing.

Participation in society includes both paid and unpaid work, and needs to be viewed from a multi-generational perspective. It includes caring for grandchildren, spouse, or other relatives (Dykstra & Komter 2012) as well as paid work. Our definition of wellbeing extends beyond physical and mental health: it includes cognitive functioning, subjective wellbeing, subjective age and survival expectations. Our main hypothesis was that people’s work/care arrangements have complex influences on their health and wellbeing, and that this relationship can be moderated by

Past research shows that social relationships and resources available from kin affect ageing and wellbeing trajectories of older people (York Cornwell & Waite 2009). CREW research quantified the current and possible future number of kinless older adults, how they differ across national contexts, and the health and wellbeing implications of ageing without close kin.

Levels of old-age kinlessness (i.e., unpartnered and childless older adults) are rising across the globe (Margolis and Verdery 2.1). Kinlessness tends to correlate with social disadvantage, i.e. with low economic and cultural resources. Moreover, kinless older people tend to report worse health and may represent a growing population health concern. Social disadvantage is also visible in the duration of healthy life lived as a grandparent (Margolis and Wright 2.2), which may affect relationships and exchanges with grandchildren, an important type of family tie for older people’s wellbeing.

Our research, also highlighted that the association between having specific family ties (or not) and health/wellbeing varies across contexts and indicators. In Switzerland, for instance, having children is not associated with higher subjective wellbeing, either in the short-to-medium run, i.e. up to 15 years after the birth of a child (Mikucka 2.3), or in the long run, i.e. when parents reach older ages (Mikucka 2.4). However, the latter study highlights that parenthood may have a positive effect on wellbeing in certain cases, e.g. among men entering widowhood. That childless older adults are not always worse off than parents is also the conclusion of Quashie et al. (2.5), who argue that the association between childlessness and health varies by country and health measure.

The drivers of health and wellbeing in old age

Health and wellbeing of older adults were analysed by the CREW research team not only in relation to kinlessness, but also more broadly, e.g. by gender and socio-economic conditions and across welfare states. Uccheddu and colleagues (3.1) show that the positive impact of education and wealth on health is stronger for women in Southern and Western Europe than in Northern Europe, pointing to the important role of the welfare state in facilitating women’s autonomy and economic independence from the family, and thus in attenuating socio-economic inequalities. Socioeconomic inequalities have also been detected in “satisfied life expectancy” in Spain: even though Spaniards are living longer and healthier lives than ever before, only those with high educational attainment spend more years feeling satisfied than dissatisfied (Solé Auró and Lozano 3.2).

Health and wellbeing inequalities among older people are not only related to their current socioeconomic status, but also to disadvantage experienced earlier in life, including unemployment and financial hardship. Zanasi et al. (3.3) find that both the persistence over time of disadvantages in several life domains and their coexistence are related to a higher likelihood of late-life frailty. Along this line, Mikucka (3.4) reports that in Poland, low education and current and past economic difficulties are significant predictors of loneliness in old age, triggered mainly by divorce and widowhood, at least among the younger-old (60-74 years).

The CREW project also aimed at improving analysis of health and wellbeing from a methodological viewpoint. For example, Paccagnella et al. (3.5) propose a new approach for identifying and measuring depression, going beyond traditional measures and approaches, and thereby offering a useful guide to policies aimed at improving the wellbeing of older people.

Caregiving is frequent in late life, for instance to grandchildren, ageing parents and spouses. CREW’s analyses highlighted the strong links that exist between caregiving and later life wellbeing, as well as the various moderating factors that can help identify meaningful policy interventions. Arpino and Gómez-León (4.2) examine the effect on depression of combining grandchild care with other care roles among older adults in Europe. Grandmothers who provide grandchild care only are at a lower risk of depression than their non-caregiver counterparts. However, this protective factor disappears if care is provided also to others, such as a co-resident family member. Uccheddu et al.  (4.3) investigate how gender shapes the influence of care responsibilities on health at older ages. Starting caregiving has detrimental health effects, from which it is not easy to recover after the subsequent transition out of caregiving. That said, the health consequences of caregiving transitions depend on gender and welfare systems: stopping caregiving leads to health improvements among Southern and Eastern European women, but not in other cases.

To gain a deeper understanding of the effects of caregiving on health and wellbeing, patterns of support given and received must be considered. For instance, Hämäläinen and Arpino (4.1) find that child-parent support is rarely reciprocal. Patterson and Margolis (4.4) highlight the importance of emotional support, and note that this (too) is more often provided by women, across the entire life course. This aggravates the imbalance in the burden of care, traditionally shouldered mainly by women.

Caregiving, health and wellbeing at older ages are interconnected with retirement decisions, especially for women (Rizzi and Kim 5.2). Work interruptions, higher completed fertility, being a single or widowed mother tend to delay retirement – arguably out of economic need. However, results vary greatly across welfare regimes. An apparently surprising finding is that number of children does not seem to affect women’s retirement intentions in the Mediterranean countries, where one would instead expect family ties to play a key role in retirement decisions due to the familistic tradition of this region. However, this result may be due precisely to the cultural setting, as pointed out by Zanasi and Sieben (5.3) who find that the transition to grandparenthood does not influence retirement decisions in Italy. The weak connections between the two transitions may be related to the familistic nature of the Italian welfare system, which discourages female labour force participation. Older women in Italy frequently experience the transition to grandmotherhood as non-workers, either because they retired early or because they never worked. Young women also show low rates of labour market participation, especially after the birth of the first child, which explains their limited need of grandparental help with childcare.

Retirement is one of the most important transitions at older ages, affecting several dimensions of life, which, in turn, may influence health and wellbeing. Pushing back the retirement age is one of the adjustments made necessary by population ageing, if pensions systems are to remain viable. This is one of the elements of De Santis (5.1)’s proposal for an improved pay-as-you-go pension system (IPAYG), in which several key components (e.g. pension amount and retirement age) are defined in relative terms, and therefore adjust dynamically to the prevailing economic and demographic conditions.

Especially where family members are important care providers, delaying the retirement age may have negative consequences, especially on adult female labour force participation, unless, of course, later retirement is accompanied by other policy interventions, favouring the work-family balance. Conversely, work interruptions and early-retirement due to family obligations (e.g., grandchild care) may also be detrimental for older adults’ wellbeing. For instance, Pirani et al. (5.4) find that while formal retirement does not affect health in any significant way, negative consequences emerge when other routes out of the labour market are followed (a form of early retirement), e.g. due to unemployment or family obligations.

An overview of the project, and an eye to the future

The CREW project has helped to shed new light on the complex interrelations between caregiving, work and wellbeing at older ages. Our research identified several areas for policy interventions. Population ageing and increasing levels of kinlessness call for interventions in the areas of care and active ageing. More and more individuals will reach advanced ages, with a substantial share of their late life spent in poor health. This calls for an increase in care services, also because traditional providers of informal support (close kin) will be less and less available. Active ageing policies, on the other hand, can favour a prolonged productive and societal role for older people. Incidentally, this could help to keep older people in better physical and mental condition, thus reducing their need for public support. Participation in society does not need to be limited to paid work; older adults can contribute in several different ways, starting with volunteering.

CREW research also documented persisting inequalities in health and wellbeing at older ages. Interventions to fight these inequalities need to account for the accumulation of disadvantage over time and across different dimensions (e.g. gender and socioeconomic status). Policies for active and healthy ageing that take a long-term perspective and start early in life, are therefore particularly warranted.

As often happens, the CREW project leaves a few old questions open, and paves the way for new ones. Among these, the possible consequences of the COVID-19 pandemic on older people’s health and wellbeing, their labour supply, retirement decisions and care arrangements. Will the post-pandemic world be the same as the one that preceded it?

Second, together with population ageing and shrinking family networks, European countries are experiencing a diversification of families and family dynamics, and an increase in the prevalence of phenomena such as step-(grand)parenthood and “grey” divorces (i.e., divorces at late ages). These new family dynamics interact with the dimensions covered in the CREW project, but the consequences of these new trends remain a largely unexplored territory.

Third, digital technologies offer new ways of connecting with family and non-family members, to give and receive care, to access medical services, and to work (e.g. working from home).

Future research should examine caregiving, work and wellbeing of older adults in an increasingly digital world.